A Catholic high school in Chicago has fired a gay teacher after students outed and harassed him for over a year. 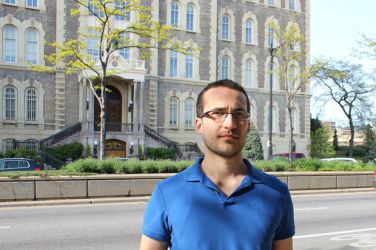 Matt Tedeschi taught religious studies and French at St. Ignatius College Prep, a Jesuit institution. Having taught for four years, he was up for tenure next year. But trouble began in February 2016 when a student discovered his profile on an online dating website. DNA Info reported:

” ‘He “outed” me to a bunch of students. He knew that he was making fun of me and insulting me,’ Tedeschi said. ‘He wanted to embarrass me.’ “

Tedeschi said he never expected students to find him on the website, which is for people age eighteen and older and which is used by other staff at St. Ignatius. He told DNA Info, “Everyone should have the right to a private life.”

Students continued to harass Tedeschi for over a year. One student tweeted against him sixteen times. The tweets include one that said, “Let’s not forget I have screenshots that can end you,” a reference to the screenshots of the teacher’s dating profile, one of which was included in the tweet. All of this created what Tedeschi described as “a horrible environment,” especially given the aforementioned tweet which he considers “public blackmail.”

Unfortunately, school administrators offered little support for Tedeschi. He informed them multiple times about students finding his dating profile and about their continued harassment. Just one student received two detentions for tweeting against Tedeschi. Principal Brianna Latko did little to stop what Tedeschi called a “culture of harassment.” He explained:

” ‘[School officials] were just watching it play out. . .I was having anxiety attacks before I went to class. It just completely undermined my authority as a teacher and made me feel small. … This unnecessarily pitted me against my students, which never should have been the case.’ “

This March, Tedeschi was informed that St. Ignatius would not be renewing his contract for the 2017-2018 school year. According to DNA Info:

“The school gave him the opportunity to finish out the school year, but after he discussed his departure with a colleague, the school called him to say that his employment was being terminated immediately. In exchange for the rest of his salary he would have earned over the semester, school administrators urged him to sign a non-disclosure agreement, but Tedeschi declined, he said.

“Tedeschi said he was told he was being fired because he showed poor judgment posting photos online and didn’t stop the classroom conversation involving the sensitive information. He said he was also told he was negative and undermined authority — although administrators declined to elaborate to him on these charges or provide further details in writing.”

Administrators will not comment on the firing or surrounding events. Spokesperson Ryan Bergin said confidentiality precluded any comment, but that Tedeschi was “treated fairly” and that school officials “wish him all the best.”

Though his sexual orientation was not explicitly referenced when he was fired, Tedeschi said the firing is really about him being forcibly outed by students as a gay man, his decision to seek an end to the harassment, and the school’s attempt to cover up an embarrassing incident. A colleague agreed that it was not Matt being gay which was the problem, but that his public outing violated the “hush-hush” attitude towards gay faculty and students and was “creating too much trouble.”

Tedeschi has released an open letter (see end of linked article) to the school community, in which he expressed gratitude for the school community. He is publicly telling his story of firing because “only by speaking truthfully and openly can our institution become a better version of itself.” He is now considering his legal options.

This firing is a tremendous loss. Students have lost a teacher who by all accounts was gifted and enthusiastic. Tedeschi was not supported by the administration against harrassment. St. Ignatius administrators’ decision to fire him is troubling for one more reason. It sends the message to offending students and the wider community that homophobia is implicitly acceptable because, in this case, it was the victim who was punished, not the harassers.