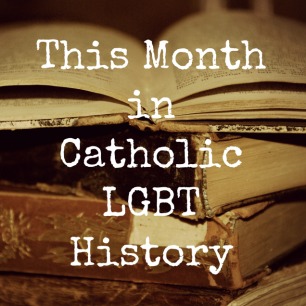 Once a  month, Bondings 2.0 staff will produce a post on Catholic LGBT news events from the past 39 years.  We will comb through editions of Bondings 2.0’s predecessor: Bondings,  New Ways Ministry’s newsletter in paper format.   We began publishing Bondings in 1978. Unfortunately, because these newsletters are only archived in hard copies, we cannot link back to the primary sources in most cases.

Here at Bondings 2.0, we are fond of pointing out how much progress on LGBT equality is being made on Catholic college and university campuses.  Our Campus Chronicles series documents so many encouraging steps happening around the country and the globe.

But that was not always the case.  A major turning point happened for Catholic colleges in April of 1988, when gay student groups at Georgetown University, Washington, D.C., won a court battle to be given the same opportunities as other campus organizations.

On April 2, 1988, The New York Times published an article entitled “A Gay Rights Victory at Georgetown” which reported on the court’s decision.  The article begins:

“An eight-year legal battle that pitted gay students against the nation’s oldest Roman Catholic university ended this week as lawyers for Georgetown University in Washington agreed to give homosexual student groups the same privileges as other student groups.

“Both sides said they had won a victory in the settlement on Tuesday, which requires Georgetown to grant gay students access to facilities and financing but does not demand that the university recognize or ‘endorse’ them.”

The article stated that the struggle for this kind of accommodation began at Georgetown nine years earlier in 1979 and had been a focus of campus debate since then.  The campus refused to provide accommodation citing its Catholic principles and religious freedom.

Richard A. Gross, who was a lawyer for the students described the case as a “landmark for gay rights” because, as the Times article explained “the appellate court decision marked the first time a court had ruled that the state had a ‘compelling interest’ to ban discrimination on the basis of sexual preference even over constitutional claims of religious freedom.”

One of the other lawyers in the case was Ron Bogard, who at the time was a New Ways Ministry board member.

The Times described the legal point on which the case centered:

“Georgetown was held in violation of the District’s human right ordinance adopted in 1977, which bans discrimination in 15 categories, including sexual preference.”

The newspaper reported the compromise that the gay groups and the university reached:

“Among the concessions made by the gay students was an agreement that all literature distributed by the groups would contain a disclaimer noting that their views ‘are not endorsed by Georgetown University.’ “

It is amazing to look at Georgetown today and to see how far it has come.  It’s LGBTQ Resource Center describes itself on its web page:

The LGBTQ Resource Center, serving lesbian, gay, bisexual, transgender, queer, and questioning individuals, is the first such Center of its kind at a Catholic/Jesuit institution in the country. We have sought to build on the rich interfaith and intellectual engagements of Georgetown to create a Center that will speak to all of us in all of our rich diversity.

It is also worth noting that as we struggle with contemporary debates over religious freedom and sexuality, that almost 30 years ago, a civil court saw that protecting individuals’ human rights was a higher value than claims of religious identity.

Gay Band Director Is Example to Students and to Catholic SchoolsCourt: Church Legally Justified in Firing of Gay Church Worker in Chicago
Scroll to top
Loading Comments...
%d bloggers like this: