Last month, a St. Louis, MO, Catholic high school, Nerinx Hall, made news when it turned down a student request to establish a gay-straight alliance (GSA). Questions arose about how Catholic high schools can best serve their LGBTQ+ students while retaining their Catholic identity.

“A hostile school climate affects students’ academic success and mental health. LGBTQ+ students who experience victimization and discrimination at school have worse educational outcomes and poorer psychological well-being.” Additionally, the GLSEN document said that unsafe school environments also lead students to drop out of school early, “42.5% of LGBTQ+ students who reported that they did not plan to finish high school, or were not sure if they would finish, indicated that they were considering dropping out because of the harassment they faced at school.”

LGBTQ+ students who experienced discrimination were “more than three times as likely to have missed school in the past month, had lower GPAs than their peers, and had lower self-esteem and school belonging and higher levels of depression,” according to the GLSEN report.

“We see that LGBT youth are being deprived of an equal education based on these hostile school climates,” Emily Greytak, GLSEN Research Director.

School climate directly impacts how well students learn and socialize. Heightened stressors like bullying, discrimination, victimization, and lacking a sense of community are proven to make LGBTQ+ students more likely to have negative educational and developmental outcomes. LGBTQ+ student groups provide a space for students to create a sense of community and support so they can better perform as students as they develop into adulthood.

More recent data in GLSEN “Safe Space Kit” 2016 and GLSEN’s 2015 National School Climate Survey shows students who did have an LGBTQ+ student group were less likely to feel unsafe because of their sexual orientation, experienced lower levels of victimization related to their sexual orientation and gender expression, reported a greater number of supportive school staff and more accepting peers, were more likely to report incidents of harassment and assault, felt more connected to their school community, and were less likely to miss school because of safety concerns than LGBTQ+ students in schools without an LGBTQ+ student group.

LGBTQ+ student groups have even been found to benefit school climates on issues beyond sexuality and gender identity. According to the GLSEN “Teasing to Torment” 2015 document, even non-LGBTQ+ students in schools with LGBTQ+ student groups “experience less victimization based on race/ethnicity and based on appearance than students without a GSA” and reported “greater feelings of safety for the general student body.” 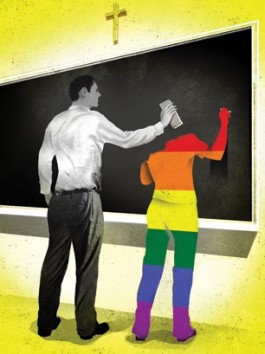 According to a GLSEN’s 2015 National School Climate Survey, barring students from forming or promoting an LGBTQ+ student group clearly sends “the message that LGBT topics, and in some cases, even LGBTQ+ people, are not appropriate for extracurricular activities.” GLSEN claimed that by denying or hindering LGBTQ+ student groups, the school administration marks “official school activities distinctly as non-LGBT” and that such discrimination prevents “LGBTQ+ students from participating in the school community as fully and completely as other students.”

“Our generation will show that it can rise to the promise found in each young person when we know how to give them space. This means that we have to create the material and spiritual conditions for their full development; to give them a solid basis on which to build their lives; to guarantee their safety and their education to be everything they can be.”

Catholic school administrators and educators cannot ignore the needs of LGBTQ+ students as they raise themselves to the promise found in their own selves. Denying them the space to grow and heal does not rise to their promise, it denies that their promise exists.

So, paraphrasing Pope Francis, Catholic school administrators should ask themselves: “Can we rise to the promise found in your LGBTQ+ students and guarantee their safety and their education to be everything they can be?”