Students at a Catholic high school in Connecticut who have been petitioning the administration to allow same-gender prom dates are now also seeking a public apology after a student leader alleged that she was intimidated by school officials. 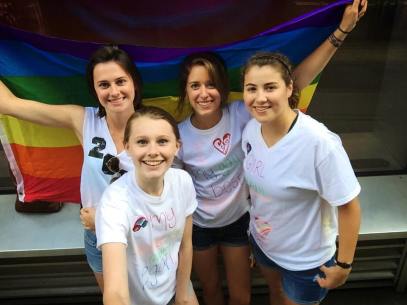 “Many LGBT+ children who are raised in a Catholic home are terrified to come out. They could face harassment, judgment, and rejection from their peers and family. So they don’t come out, and they suppress that part of themselves. Suppressing who you are and living in constant fear of the people around you has horrible effects on mental health, causing a high suicide rate among LGBT+ teens who are not supported by their family or community.

“Catholicism is a religion based on love. Jesus preached a message of love and acceptance of all of your neighbors, he hung out with society’s rejects and did not discriminate at all. I subscribe to that message of love, and Pope Francis actively preaches that love.”

But, according to a second petition which has gained more than 1,500 signatures itself, Allison was intimidated by administrators into closing down her first petition. She posted an update saying, “I’m sad to say that I will be discontinuing this fight due to administration strongly advising me to give up.”

The second petition, addressed to the Archdiocese of Hartford and Diocese of Norwich, as well as administrators at the all-girls school in Middletown, Connecticut, seeks not only same-gender prom dates, but a public apology for the alleged actions against Allison. It states, in part:

“Nothing about Mercy’s prom policy comes anywhere close to understanding, compassion, or providing a safe and nurturing environment. . .It’s time for Mercy High School to set a standard based on love and acceptance and the first step is to issue a public apology to the student that took a stand for justice. That needs to be followed by an immediate reversal of their horrible policy of discrimination.”

Alumnae have added their voices in support of the students’ initiative, starting the #WePROMise campaign on social media and contacting Mercy High officials. The Hartford Courant reported:

“Victoria Scott, a 2013 Mercy graduate from Oxford and now a college student in New York, said she didn’t come out as gay until after high school because she never felt the environment at the school would have allowed it.

“‘As a young woman in high school, I was still trying to figure out who I was as a person,’ she said. . .We don’t have a problem with being a woman of Mercy, it’s the human rights issue and the respect issue. . .To the alumni looking at this issue, there is no mutual respect.'”

Mercy High officials are not agreeing to the students’ request. Sr. Mary McCarthy, the school’s president, said in a statement:

“‘Mercy’s practice relative to prom attendance has been, and continues to be, that Mercy students are permitted to attend alone or in the company of a friend or friends of their choosing. . .In this tradition, the expectation has been that a Mercy student’s date be male. These limitations are premised both in preserving the spirit of the prom as a safe and enjoyable experience for the students of Mercy, as well as recognizing and adhering to the teachings of the Church.'”

McCarthy also said students are expected to attend Mercy High with an understanding and desire to abide by these principles” of the Catholic faith. The Diocese of Norwich’s statement, released through Mercy High spokesperson Marie Kalita-Leary, said, “Mercy is proactive with regard to clearing the air and being faithful to its founding values – as it has already done in this particular instance.”

Unfortunately, despite the Diocese’s wishes, the air has not been cleared at Mercy High School. Students and their allies are continuing to build support for equality when it comes to prom dates, including the #WePROMise website found here.

Each prom season, incidents of discrimination at Catholic schools continue to grow, and each prom season, I wonder why. There is no reason a lesbian student should be thrown out from prom for wearing a suit or a gay student should be suspended for wanting to bring a male partner. In a letter from last year, I wrote to my former high school that equality at prom is not only the right thing to do, it is good pastoral care. Common sense can clear the air at Mercy High, and could avoid such controversies altogether, if only administrators opened themselves more fully to students’ needs.

“[Gay people] as is true of every human being, need to be nourished at many different levels simultaneously. This includes friendship, [brotherhood] which is a way of loving and is essential to healthy human development. It is one of the richest possible human experiences. Friendship can and does thrive outside of sexual involvement.”

In Melbourne, Australia, Archbishop Denis Hart approved a similar policy, saying “These are quite often emotional situations and it’s very important that we always have respect for the dignity of the human being involved.”

I hope Sr. Mary McCarthy and Mercy High officials will listen to their students and will follow the advice of these two positive steps.  The school should apologize for any mistakes made and open prom as a space where all students feel welcomed to celebrate.

New Ways Ministry’s Eighth National Symposium, “Justice and Mercy Shall Kiss:  LGBT Catholics in the Age of Pope Francis.” will include a focus session on, “Youth, Young Adult Ministry, and LGBT Questions,” led by campus minister and researcher Michael Maher.  The symposium is scheduled for April 28–30, 2017, in Chicago.  For more information, click here.

Judge Okays Fired Gay Teacher’s Lawsuit Against Catholic School Transfigured From a Life of Loneliness and Disconnection
%d bloggers like this:
Scroll to top