Students at The Catholic University of America (CUA), Washington, DC, are again seeking official recognition for their campus LGBTQ group, but whether their proposal will be approved or again denied is not clear. 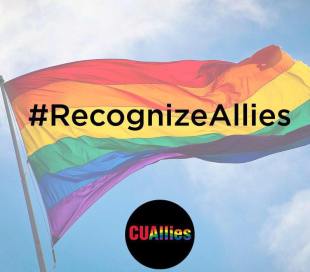 Leaders of CUAllies (in which I participated during college) submitted their proposal to the administration last Wednesday, the culmination of a week of actions to make visible the support they have on campus.

Events included an “I am an Ally” photo campaign, wearing rainbow pins to a town hall with University President John Garvey, and a social media blitz using the hashtag #RecognizeAllies.

This latest drive began with a petition that generated 1,900 signatures, promoted on Twitter by CUA alumni like former Maryland Governor Martin O’Malley and actress Susan Sarandon. The petition read, in part:

“All students, regardless of their sexuality or gender identity, deserve to be accepted and treated with respect. . .We seek to create a respectful, compassionate, and understanding community at CUA by providing resources, a safe environment, and a voice for LGBTQ+ students on campus.”

CUAllies President Carly Tomaine told Metro Weekly that official recognition is not only about using University spaces or receiving funding:

“‘[I]t’s that Catholic University needs to acknowledge the fact that the LGBT community has been marginalized and discriminated against, and are still, to this day, fighting for their rights . . . And because of that they deserve an outlet to feel safe and feel at home, and that’s what CUAllies is to so many people.'”

But CUAllies is facing resistance from not only the administration. A small group of students is now opposing the group. A student government resolution to support the group, which passed unanimously last year, failed in a recent vote. And The Tower, the campus newspaper, once unabashedly supportive, was critical of the group in its latest editorial.

For now, CUAllies is continuing to hold meetings, offer support, and fundraise for expanded programming as they wait for a response from an administration that has been dismissive of students’ desires for an LGBTQ group on campus.

Similar proposals for official recognition were denied in 2009 and 2012 (the day after the University of Notre Dame finally approved an LGBTQ pastoral plan) despite the fact that CUA had a recognize student group from 1988 to 2002.

In 2014, administrators cancelled a screening of the film Milk about the life of gay rights icon Harvey Milk, and have the school has hosted LGBT-negative speakers.

What is different this time is that the human rights law in the District of Columbia has changed. The Armstrong Amendment, which allowed religiously-affiliated colleges to discriminate against LGBTQ student groups, was repealed in 2015, opening the school to a potential lawsuit if CUAllies is again denied.

Approving CUAllies would be entirely consistent with church teaching, and it would enhance the University’s Catholic identity. New Ways Ministry’s list of LGBT-Friendly Catholic Colleges and Universities includes dozens of schools who have chosen to support LGBTQ members in their communities. It is far past time to #RecognizeAllies.

To read Bondings 2.0’s interview with CUAllies leaders last year, click here. For the blog’s full coverage of LGBT issues in Catholic higher education, see our “Campus Chronicles” category to the right or by clicking here.

Why Being in Love Leads Us to Seek Justice and EqualityAllowing Lent to Disrupt Our Lives and Renew the World
Scroll to top
Loading Comments...
%d bloggers like this: