A senior Vatican official who defended the reception of Communion by divorced and remarried Catholics has said such openness does not apply to same-gender relationships, which he said were “not a natural condition.” 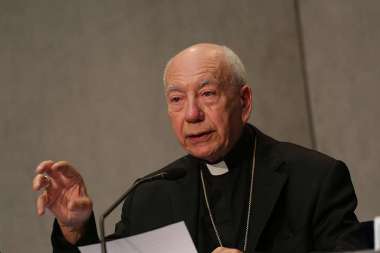 Cardinal Francesco Coccopalmerio, president of the Pontifical Council for Legislative Texts, made his comments in a recent interview with Crux.

The cardinal sparked headlines earlier this month for publishing a booklet in which he defended Communion for divorced and remarried Catholics. Crux reported further:

“Asked if this interpretation applies also to gay couples who live together, some civilly married too, Coccopalmerio said that it’s ‘clearly’ not the same situation because for Church teaching and doctrine, ‘it’s not a natural condition. We can accept them, welcome them, accept their decision, but it’s not [the same].'”

The booklet, titled The Eighth Chapter of the Post-Synodal Apostolic Exhortation ‘Amoris Laetitia’, was offered as a “simplification” against claims by more traditionalist Catholics that there was doctrinal confusion, Coccopalmerio said. Though not released in any formal capacity, his comments are especially noteworthy because the Pontifical Council he oversees is charged with interpreting church documents. He is also a member of both the Congregation for the Doctrine of the Faith and the Apostolic Signatura.

Coccopalmerio’s reasoning is worth a closer consideration given his tenuous claim that same-gender couples can not be included in his communion idea. In the booklet, the cardinal explained the conditions under which a Catholic in a “non-legitimate” heterosexual relationship could receive Communion: the person is “conscious of the wrongness of the situation, has the desire to change it but can’t because it would hurt innocent people, such as the children,” and has consulted a priest and/or bishop to find a “common solution” through dialogue. America reported on a case study offered by the cardinal:

“He cited as an example the case of a woman who is free to marry according to church law and decides to enter into a stable relationship and lives with a married man, whose wife had left him with three young children. In such a case, he explained, ‘the children would now consider her their mother and for the man, she is his life,’ as she means everything to him. If she eventually recognizes the problem with her situation and decides to leave, then her husband and children will find themselves in great difficulty. But the cardinal said, ‘If this woman concludes “I cannot leave. I cannot do such harm to them,” then this situation, where she wants to change but cannot change, opens the possibility of admissions to the sacraments.’

“In such a situation, the cardinal said, there is the recognition of sin and the sincere desire to change but also the impossibility of making it happen. In this situation, he would tell her, ‘remain in this situation, and I absolve you.’ While he said that he has never had to refuse absolution to anyone, the cardinal nevertheless insisted that ‘one cannot give absolution except to persons who are repentant and desire or want to change their situation, even if they cannot put their desire into practice now because that would harm innocent persons.’ In this way, he said, ‘the doctrine is safeguarded but takes account of the impossibility.’

Coccopalmerio also said that ideally such a couple should live without sexual intimacy, but also noted that Amoris Laetitia referenced Vatican II’s Gaudium et Spes, where it is acknowledged that lack of such intimacy could deeply harm relationships. It may be impossible, he admitted, for couples in “non-legitimate” situations to practice complete abstinence. He ultimately affirmed the necessity of Catholics in these situations to make a conscience decision.

I explained his reasoning in such detail above because as I read the interview, I wondered why his reasoning about Catholics who are divorced and remarried cannot, in his estimation, apply to Catholics in same-gender relationships. If his positions are accepted and engaged, then shouldn’t same-gender couples be able to receive Communion after consulting a priest, making penance, and following their consciences, even if they remain in such situations? Granted, given the Magisterium’s present articulations of church doctrine, there are differences between the two groups, but appeals to conscience make no such distinctions. Every person is mandated to follow the decisions of a properly formed conscience.

The reason for Coccopalmerio’s dissonance is his statement about same-gender relationships as “not a natural condition.” Such a statement reveals inadequate knowledge about sexuality, and likely an unfamiliarity with the lives of LGB people. He appears unable to imagine same-gender relationships as loving and generative, and worse yet, he seems to imply LGB people have less moral agency than their heterosexual peers.

Cardinal Coccopalmerio is not the first, and sadly will not be the last, church leader to hold such errant views about sexuality. But I find his remarks particularly disheartening. When news of his booklet first broke, I was glad to see a Vatican official so willing to practice the mercy and respect for conscience called for by Pope Francis. That he could not extend that willingness to include LGBT people greatly undercuts his message. I pray his eyes will be opened to that natural and divine spark found and mixed-gender and same-gender relationships alike.