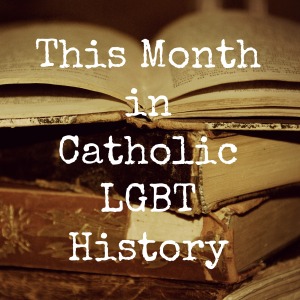 Once a  month, Bondings 2.0 staff will produce a post on Catholic LGBT news events from the past 38 years.  We will comb through editions of Bondings 2.0’s predecessor: Bondings,  New Ways Ministry’s newsletter in paper format.   We began publishing Bondings in 1978. Unfortunately, because these newsletters are only archived in hard copies, we cannot link back to the primary sources in most cases.

On February 20, 1980, which was Ash Wednesday that year, New Ways Ministry published an English translation of the Dutch bishops’ recently published document, Homosexual People in Society, a groundbreaking text, which strongly critiqued the way Catholic leaders had traditionally approached lesbian and gay issues.

The document, which had been published in the Netherlands in August 1979 by the Catholic Council for Church and Society, an official agency of the Dutch hierarchy comparable to a committee of the United States Conference of Catholic Bishops, was intended to promote discussions in parishes and Catholic groups in Holland.  New Ways Ministry said that it reprinted the document in English to be “a tool for discussion among grassroots people and hopefully as a spur to larger study” on gay and lesbian issues. The National Catholic Reporter announced the English translation in the pages of its March 7, 1980 issue.

As its title suggests, the document was primarily concerned with the social effects that gay and lesbian people experienced, particularly as a result of Church doctrine and practice.  In its introduction, the Council stated:

One of the important points of the document was its critique of traditional Scripture interpretations which were used to condemn lesbian and gay people.  In some of its strongest language, the Council observed:

“Secondly, when the Scriptures speak disapprovingly about homosexual acts, the main emphasis appears to be on the condemnation of abuses in which homosexual acts play only a part.  Most often these abuses are mentioned very explicitly: violation of hospitality, blackmail, prostitution, and especially idolatry. . . .

“There seems to be insufficient grounds for justifying discrimination against homosexual persons by appealing to those texts.”

Also, significant for its time, was an openness to critique natural law by appealing to new scientific research.  The Council wanted to examine

In a certain respect, the Dutch document was promoting similar ideas of non-judgmentalism that we have seen advocated by Pope Francis.  In one section, the document states:

“. . . [F]rom the moral judgment on homosexual behavior one cannot derive automatically a total condemnation of someone who behaves homosexually, let alone relegate him or her to the position of a social outcast or second-class citizen.”

These words are extremely important for Church leaders and pastors to pay heed to before excluding LGBT Catholics from sacraments, volunteer ministries, or employment.

The document continued in the vein of Pope Francis.  In the following section, we read a forerunner to the pope’s complaint that Church leaders overemphasize sexuality issues. The document condemns “all too one-sided and exaggerated attention to sexual behavior.”  It continued:

“This overemphasis plays a role in another way in the problems of homosexual people in society, since this overemphasis can itself be a source of discrimination.  The Council wants to call attention emphatically to this.  Respect or personal freedom and conscientious striving for a just society exclude a position on sexuality which identifies orientation and behavior too closely together.  This creates a danger of shortsightedness and one-sidedness in judging people.  It can easily lead to an excessive attention to sexual behavior especially in its strict expressions of genital sexuality.”

The document does not challenge the prohibition of sexual activity between persons of the same sex, though it does acknowledge at one point that “the rejection of homosexual behavior embarrasses the Church precisely because some successful homosexual love relationships do exist.”

The more important emphasis in this document, however, is its insistence that Church leaders and pastors should not become condemnatory of lesbian and gay people. The authors were aware that the Church’s prohibition on same-sex activity could be inflated and destructive.  They warned that the prohibition “should certainly not be viewed as any indication of silent support for discrimination,” noting:.

“For that would be a sad caricature of Christianity.  In fact, the destructive results of this caricature are already being felt.  There is evidence of this, for example, in the fact that the self-acceptance of the homosexual person, which is often the result of a difficult struggle, frequently leads to an automatic break with the Church.  This is understandable within the framework of that caricature.  But in our opinion, it is a sad state of affairs both for the Church and the homosexual person.”

For its time, the Dutch document spoke truths that were hard for people to accept.  I think that even today, unfortunately, some Church leaders would be uncomfortable with some of the idea that the document expressed.  But in many quarters of the Church, including in the papacy, we are seeing some of their ideas finally taking root.