Bishop Robert Barron has said he does not believe the church should seek to overturn the U.S. Supreme Court’s Obergefell decision that legalized marriage equality in the United States. Barron, an Auxiliary Bishop for the Archdiocese of Los Angeles, also criticized an obsessive focus on “pelvic issues” because it diminishes Christianity and undermines evangelization. 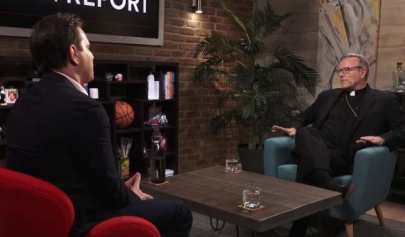 Interviewed by Dave Rubin of The Rubin Report, Barron answered questions about many topics. including homosexuality and marriage equality. Barron began his response to a question on these topics with the following:

“I said this one time, I was in New York with Cardinal Dolan actually, and we were talking to reporters. And I said, if the only thing a gay person hears from the Catholic Church is, ‘you’re intrinsically disordered,’ we’ve got a very serious problem on our hands, if that’s what the message has become. . . If that’s is the way our message is coming out, we [the church] are disordered. We had a problem in the way this message was being conveyed.”

Instead, the bishop said “message one” to gay people from the church should be:

“You are a beloved child of God, who has been embraced by the mercy of Jesus Christ and invited to a full share of the divine life. You’re a son of God, called to eternal life.”

Barron continued to say that, like everyone, the moral lives of gay people are complex, but reiterated that the starting point for the church’s engagement with gay people should be inclusion. This approach, he said, is the approach being modeled by Pope Francis.

Rubin, a married gay man, then asked Barron about marriage equality and the bishop’s “personal feelings” about the U.S. Supreme Court’s Obergefell decision. Rubin inquired, “I assume you felt it was a wrong decision by the court?” Barron responded:

“I do. But I don’t think I want to press it further. I think where we are right now in the States, I’ll apply the Aquinas principle. I think it would probably cause much more problem and dissension and difficulty if we keep pressing it. . .

Barron clarified that he believes marriage equality does have “a negative impact on the wider society” and compromises marriage. Rubin asked him if, on marriage equality, his “heart and spiritual self aren’t quite matched up” because while the bishop wasn’t expressing judgment, he clearly did not approve of a same-gender marriage. The bishop described this characterization as “probably right.”

[NOTE:  You can view the relevant parts of the interview by clicking here.]

The interview comments are noteworthy, but more so because of later comments Barron made in a blog post published after the interview. There, he expressed gratitude for the friendly interview with Rubin, adding that he hoped viewers will understand “there is a lot more to Christianity than the ‘pelvic issues'” and that “this preoccupation with ‘the pelvic issues’ has served to undermine the work of evangelization.” Barron continued:

“When you read the great evangelizing texts of the New Testament—the Gospels, the Epistles of Paul, the book of Revelation, etc.—you don’t get the impression that what their authors wanted you primarily to understand is sexual morality. Rather, they wanted you to know that the great story of Israel had come to its highpoint and that God, in the person of the crucified and risen Messiah, had come to reign as king of the world. God, redemption, the cross, the resurrection, Jesus the Lord, telling the Good News—these are the master themes of the New Testament. Again, please don’t misunderstand me: God impinges upon all aspects of life and therefore placing our sex lives under the Lordship of Jesus matters. But I fear that for so many people in the secular world today, religion is reduced to the policing of sexual behavior, and this is massively unfortunate.”

All of these remarks have a different tone than other LGBT-related statements Barron has made, including through his role as founder of Word on Fire Catholic Ministries. For instance, in 2015, responding to the coming out of transgender celebrity Caitlyn Jenner, Barron posted on Facebook that transgender identities were a modern form of Gnosticism, an ancient Christian heresy, and analogized transgender people to pedophiles.

At this point, and especially when so many vulnerable populations are threatened by the Trump administration, the bishop’s resistance to use church resources in a futile fight against marriage equality is common sense. More bishops should make similar public statements. I hope Barron’s prominence, and his membership in the growing number of ‘Francis Bishops,’ will cause his resistance to become commonplace.

To Barron’s references about “pelvic issues” reducing the Christian message and undermining evangelization, I suggest a mirror. Barron framed this discussion as a general societal obsession with sexuality, perhaps implying that, as other bishops have said, it is the media or society which obsessed with such matters, not the church. But Barron needs to be more specific for his words to really have weight; he should admit that church leaders, too, often obsess about sexuality.

Similarly, while Barron suggested that the church’s teaching on homosexuality has been mistakenly conveyed as condemnation, I think he is mistaken that there’s been a mistake in communication.  Actually, the language of teaching is very harsh and has regularly been used to condemn.  Barron and other church leaders need to admit this reality.

Many other Catholics have found integrated ways to engage sexuality. For instance, Catholic families have often responded to a member’s coming out with the ability to both acknowledge and affirm that member’s sexual orientation, and to understand them as a whole person for whom sexual identity is but one essential part. These families began with a message of inclusion that their gay, lesbian, or bisexual member was a beloved child of God invited to life with Christ. And any navigation of morality was done with love, concern, and respect for the person’s conscience.

Such an approach seems to elude many bishops in the United States.   Barron correctly noted that, often today, Christianity has been reduced to a system of belief whose central tenets are prohibitions on sexual activity. What he needs to say further is that it is in large part the bishops who have created such a situation.

Bishop Barron has started to acknowledge what most bishops refuse to admit.  Both he and they now need to take further steps to building a more honest and forthright Catholic Church.

Under Trump, Will Transgender Lives Matter for Catholic Hospitals? Catholics Do NOT Support Religious Refusals to Gays and Lesbians
%d bloggers like this:
Scroll to top