As millions gather at “Women’s Marches” in cities across the U.S. and the globe to protest the new presidential administration in Washington, DC, it might be instructive for us to learn from a Catholic nun who has been an outspoken advocate for justice for decades: Sister Simone Campbell, SSS.  In fact, she will be a speaker at the main Women’s March in Washington, DC today. 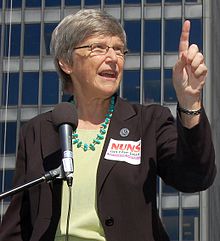 Sr. Simone, the “nun on the bus,” has been speaking passionately for many years now about issues of social justice such as poverty, health care, and military spending. Less well-known about her, though, is that she has also added her voice to discussions on LGBT equality.  In 2010,  she addressed a U.S. Congressional briefing about Catholic support for LGBT civil rights, including marriage equality.  In 2015, she was a speaker at DignityUSA’s biennial convention for LGBT Catholics.   And on April 28, 2017, she will be the leader of a retreat day focusing on social justice, spirituality, and LGBT issues, as a prelude to New Ways Ministry’s Eighth National Symposium, “Justice and Mercy Shall Kiss:  LGBT Catholics in the Age of Pope Francis.”

Sr. Simone was featured recently in a U.S. Catholic profile as part of their “Unexpected Women” series.  Interestingly for today’s events, the writer of the profile, Jean P. Kelly, notes that she turned to Sr. Simone’s words for inspiration after being “paralyzed” when Kelly’s campaigning work “failed to result in the outcome I prayed for in the most recent presidential election.”  Kelly listened to a podcast Sr. Simone had made which called for political action combined with deep contemplation.  The podcast contained this advice:

“Faith [is] …groping in the dark and…listening for the nudges and paying attention….Religious life is about deep listening to the needs around us.”

Controversy is not a stranger to Sr. Simone, whose work, first as a lawyer, and then as the Executive Director of NETWORK, a national Catholic social justice lobby founded by nuns.  She rose to become almost a household name when she started the annual campaign “Nuns on the Bus,” in which religious women travel the nation to hold rallies and prayer services for social justice across the U.S.

Kelly gives a bit of the nun’s biography, explaining how social action and religious life melded for her:

“In her autobiography, A Nun on the Bus: How All of Us Can Create Hope, Change, and Community (HarperOne), Campbell explains how her coming of age in the 1960s played a role in her decision to join a small community of religious founded in 1923 [Sisters of Social Service] with a ‘mission to be active in the world, a force for justice.’

” ‘That got them into trouble,’ Campbell says, ‘But I liked that. Jesus for me has always been about justice.’ “

Social action is only half of the equation, though, for Sr. Simone.  Kelly explains:

“Though her role at NETWORK requires very public faith in action, it was surprising for me to learn that Sister Simone sees her vocation primarily as a contemplative. “It is the most sacred piece of who I am,” she says. Her community’s practice of meditation inspired her interest in Zen meditation, which she has says teaches her how to ‘live on the edge of awareness and insight, about myself and about the world.’ “

And as happens frequently with prophetic people, her stands have sometimes found her embroiled in controversies with the church hierarchy.  But her stands are not based in opposition, as much as they are based in relationship. In her memoir, Sr. Simone states:

“No sister I know thinks she has the responsibility for the institution of the Church. Rather we walk with people in everyday life and try to live the Gospel in that context. This living reality gives us hearts of compassion for the struggle of our world….It appears that people find this attractive and describe it as spiritual leadership. The bishops, on the other hand, take their roles as chiefly one of protecting the institution. They live by rules and regulations that many people experience as judgmental and off-putting. It seems to me that some bishops are angry that the sisters are given a respect that the bishops think they alone deserve.”

Kelly notes that Sr. Simone offers great advice at times of discouragement.  It seems that with the new presidential administration, we may be experiencing discouragement on LGBT topics, but also on more broader topics of health care, immigration, gender equality, and ethnic, racial, and religious diversity.   During those times, it would be good to keep Sr. Simone’s advice in mind:

“The guilt—or the curse—of the progressive, the liberal, the whatever, is that we think we have to do it all. And then we get overwhelmed and don’t do anything. But that’s the mistake. Community is about just doing my part. Just do one thing.”

If you would like to experience more of Sr. Simone’s wisdom, consider attending the retreat day about social justice, spirituality, and LGBT issues she will be giving in advance of New Ways Ministry’s Eighth National Symposium, “Justice and Mercy Shall Kiss:  LGBT Catholics in the Age of Pope Francis.”  The retreat day is Friday, April 28, 2017.  The symposium begins on the evening of April 28th and runs until the afternoon of April 30th.  All events are in Chicago.  For more information, click here.

For more on developing a sense of hope in a dark time, read yesterday’s blog post by Robert Shine, in which he reflects on this topic.

Finding Rainbows of Hope in Dark TimesQUOTE TO NOTE: After Women’s Marches, Resolving to Give Up All Forms of...
Scroll to top
%d bloggers like this: