This week is National Migration Week, an annual event convened by the U.S. Conference of Catholic Bishops (USCCB) to focus attention on the plight of migrants, refugees, and victims of human trafficking in our world. This year’s theme for National Migration week, drawn from Pope Francis, is “Creating a Culture of Encounter.” And in this work of migration justice, it is past time for the Catholic Church to engage with the realities LGBT migrants, too. 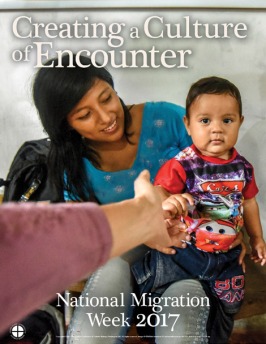 While the bishops’ solidarity with migrants is strong and consistent, they have largely abandoned LGBT migrants, thus undercutting the church’s institutional witness. In 2013, the USCCB threatened to withdraw support for immigration reform over a provision granting benefits to same-gender couples. A number of individual bishops, like Archbishop Salvatore Cordileone of San Francisco and Bishop Leonard Blair of Toledo, Ohio, reiterated this threat to stop supporting comprehensive legislation because of LGBT rights. That same year, funding through the Catholic Campaign for Human Development was withdrawn from an immigrant rights organization because the organization was in a coalition with other organizations who supported marriage equality.

Most recently, the U.S. bishops remained largely silent about the racist and xenophobic comments that were hallmarks of the president-elect’s campaign, a silence one theologian described as a “stunning lack of leadership.” Where Pope Francis seems capable of differentiating between being gay and being xenophobic, to paraphrase theologian Massimo Faggioli, the U.S. bishops seem incapable of doing the same.

But the theme of “encounter,” together with an incoming presidential administration hostile to both migrants and LGBT people and the refugee crisis globally, provides an opportunity for bishops in the U.S. to educate themselves about and initiate explicit support for LGBT immigrants and refugees.

Such a shift is quite feasible. The bishops’ language about migrants is equally true for LGBT people. For instance, a statement from the United States Conference of Catholic Bishops says the following:

“With respect to migrants, too often in our contemporary culture we fail to encounter them as persons, and instead look at them as others or render them invisible. We do not take the time to engage migrants in a meaningful way, as fellow children of God, but remain aloof to their presence and suspicious of their intentions.”

These words describe well the way many church leaders approach LGBT people, who are not encountered but treated in the abstract as distant and often invisible objects. Just as the bishops exhort others to engage migrants as subjects with whom one is in close relationship, they could turn their words inward and encounter LGBT people in the same way. The power of encounter is profound, and some church leaders have testified to this power, like Cardinal Christoph Schönborn of Vienna who said his friendship with a gay man had “melted away prejudices.”

The same analysis can be applied to the bishops’ call for responding to immigrants’ needs withr hospitality and accompaniment. Bishop Joe Vásquez of Austin, chairman of the USCCB Committee on Migration, commented that Migration Week is “an excellent opportunity to highlight Biblical tradition and our mission to welcome the newcomer” and “a vital time to show welcome, compassion, and solidarity with our migrant and refugee brothers and sisters.” It is, again, easy to understand how the bishops could apply this thinking to practice greater hospitality to and accompaniment with LGBT people and their loved ones.

The shift is not only feasible, but it must happen because the situation of LGBT migrants is often dire.

Given that more than 70 nations criminalize homosexuality and other nations restrict LGBT rights, some refugees are seeking asylum based on their sexual orientation and gender identity. How many such refugees apply for asylum in the U.S. is unclear as these numbers are not tracked by the federal government, according to a report from the LGBT Freedom and Asylum Network. But regardless of their numbers, such refugees are fleeing harsh persecution in their home country that may include discrimination, imprisonment, physical and sexual violence, and torture.

LGBT victims of human trafficking have unique needs, as stigma and specific health issues make their liberation and recovery more difficult. LGBT people, particularly youth, may be more susceptible to traffickers because of economic disadvantage and/or being ostracized from families and communities. The world’s human trafficking is one which the Catholic Church has responded well to, but the response can be improved by providing informed and competent care to LGBT victims.

Finally, too often LGBT migrants, refugees, and victims of human trafficking are subjected to immigration processes and detention facilities in the U.S. which, failing to account for the unique needs of sexual and gender minorities, actually make these communities more vulnerable. For instance, trans detainees can be misidentified and held in a facility that does not match with their gender identity.

If the U.S. bishops could take the time and be willing to truly encounter LGBT migrants, listening to their realities and learning about the specific issues affecting them, the bishops would understand that LGBT concerns must be included, and even given a preferential option, in the church’s larger witness for just and humane migration.

This National Migration Week, may all Catholics — the bishops, LGBT Catholics and their families, and immigrants — encounter one another in new ways. This coming year will prove difficult for marginalized communities (as I wrote about over the weekend here and here), and greater solidarity will be needed by all to confront further discrimination and oppression.

With LGBT Rights Under Attack in 2017, Catholics Must Seek Justice with Renewed... Resignation of Bishop Is An Opportunity for LGBT Reconciliation
%d bloggers like this:
Scroll to top