Fired for being in a same-gender marriage, church worker Michael Templeton shared his experiences of faith and community support in a new article he penned for the Providence Journal. 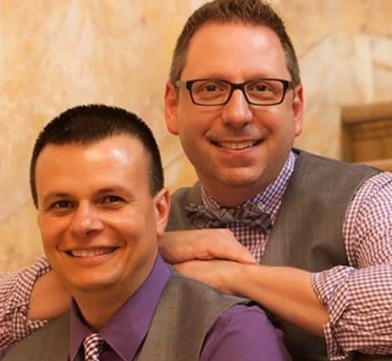 Michael Templeton and his husband

Templeton, who was fired in mid-September as the music director for the Church of St. Mary in Providence, described the last month as “rather overwhelming.” He wrote:

“[N]ot only trying to find the words to share my story, but listening to how what happened to me has impacted so many others, and all of this while trying to process a sense of personal grief for what has seemingly been lost: a ministry to a beloved church to which I’ve dedicated a quarter century.

“Regardless, I am profoundly grateful to the hundreds of people who have reached out to show their love and encouragement during the last four weeks: St. Mary’s parishioners, high school and college friends, liturgical musician colleagues from across the country, churchgoers of other denominations, and even perfect strangers who connected with my story in some way. What it tells me is that I’m living the life I’ve been called to and that my 25-year commitment to ministry through music has, in fact, made a difference.”

Templeton wrote about his understanding of faith and his own beliefs, saying that expressing faith is “a tricky thing” because:

“It is something so deeply personal and certainly not something that should be diminished, debated or devalued. We cannot claim to completely understand any other person’s journey because it occurs in the context of a very unique set of values, relationships and experiences. Those who make presumptuous judgments or offensive statements might first consider reconciling their own faults and failings with their higher power.”

He affirmed more positively his belief that every person is “created by a God who loves us unconditionally,” and said the only perspectives which matter in life’s key moments are the perspective of loved ones. Templeton added:

“Most importantly, I know that there are faith leaders and faith communities out there who authentically embody the proclamation: ‘All are welcome.’ My hope is that people of all faith traditions find a spiritual home where they are truly valued and challenged to push beyond their tightly held biases, boundaries and beliefs.”

Ever pastoral, Templeton concluded by urging readers to pray for Fr. Francesco Francese, the pastor at the Church of St. Mary, and Bishop Thomas Tobin of Providence whom he described as “the local faces of a church struggling to remain culturally relevant and fiscally viable,” as well as the Church of St. Mary community which has been so wounded by this firing.

Templeton had been music director at the church for more than five years, with nearly twenty-five years in Catholic music ministries. The Church of St. Mary had a reputation for being a welcoming parish, but that identity ended with this firing. Parishioners had hoped Fr. Francese would address the matter, but after he did not in his homily the Sunday after Templeton was fired, a choir member joined by some thirty people began singing “All Are Welcome“ during the recitation of the Nicene Creed. Several parishioners questioned whether they could remain at that parish or the Catholic Church at all.

Bishop Tobin cited Pope Francis in his defense of the firing, which he said the church had “no choice” in doing. But there is always a choice, and this firing in Providence is a prime example of what the editors of America called “unjust discrimination” in their editorial last week against the firing of LGBT church workers.

Templeton’s sharing reveals not only the deep pain and communal wounds which discrimination by church leaders inflicts on communities, but also the powerful hope and fidelity to Christ’s inclusive love with which Catholic communities are responding to these injustices. Catholics know there is always a choice to not exclude an LGBT church worker, but there is never a choice not to love as God loves us – actively and unconditionally.

For Bondings 2.0‘s full coverage of this story, and other LGBT-related church worker disputes, click the ‘Employment Issues‘ category to the right or here. You can click here to find a full listing of the more than 60 incidents since 2007 where church workers have lost their jobs over LGBT identity, same-sex marriages, or public support for equality.

Priest: Earthquakes Are “Divine Punishment” for Civil Unions in...Much Ado About “None” Things: When Young People Leave a Church of...
Scroll to top
Loading Comments...
%d bloggers like this: