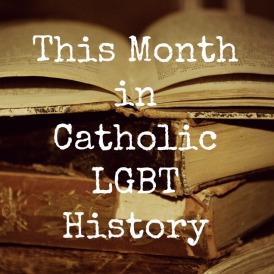 Once a  month, Bondings 2.0 staff will produce a post on Catholic LGBT news events from the past 38 years.  We will comb through editions ofBondings 2.0’s predecessor:  Bondings,  New Ways Ministry’s newsletter in paper format.   We began publishing Bondings in 1978. Unfortunately, because these newsletters are only archived in hard copies, we cannot link back to the primary sources in most cases.

An article in the October 16, 1981 edition of the Baltimore Archdiocese’s newspaper, The Catholic Review, carried the headline:  “Fr. Hughes heads new team ministry to lesbians, gays.” The article reported the appointment of Fr. Joseph B. Hughes, a priest with experience in counseling, being named the coordinator of the newly-formed ministry to lesbians and gays. The article explained:

“The appointment of Father Hughes follows several months of discussions between archdiocesan officials and members of the lesbian and gay communities in Baltimore.  The homosexual communities had requested the establishment of a special ministry which would work with them and serve their needs as Catholics.

“A task force created by Archbishop Borders, consisting of local clergy and religious studied the issues involved recommended that he appoint a coordinator for a team ministry to gay and lesbian Catholics.  Father Hughes is expected to establish such a team in coming weeks.”

The article explained that Hughes had been working with gay and lesbian Catholics in the archdiocese for eight years by that point.

To establish this ministry, the Archdiocese of Baltimore issued a pastoral plan for ministry to lesbian and gay Catholics.  Entitled “A Ministry to Lesbian and Gay Catholic Persons:  Rationale for Ministry,” and dated October 5, 1981, the document explained:

“…[T]he Church finds it necessary at times to formalize and make public its ministry to certain groups within society.  Whenever a particular group of people are denied their basic human rights and suffer violence to their human dignity because of prejudice or misunderstanding, there is injustice.  IN the face of that injustice, the Church cannot remain silent and still be true to its mission…Such is the situation of people in our society known as ‘homosexual.’ …

“Because of prejudice and misunderstanding, men and women with a homosexual orientation (more properly spoken of as gays and lesbians) have suffered public ridicule, social exclusion and economic hardship, thereby denigrating their human dignity by denying them respect, equality and full participation in society.  Therefore, the Roman Catholic Church of Baltimore is setting up a formal and public ministry to gay and lesbian people to bear witness to its opposition to the injustice they have suffered and are suffering. “

While sympathetic to social pressures gay and lesbian people experienced, the document acknowledged the archdiocese’s support of the magisterial disapproval of sexual expression, stating:

“…[T]he homosexual orientation is in no way held to be a sinful condition.  Like heterosexuality, it represents the situation in which one finds oneself, and so the starting point for one’s response to Christ’s call to perfection.  Responding to this call does not mean that one must change this orientation.  Rather it entails living out the demands of chastity with that orientation.”

But the document did not end there.  Immediately following that section is an amazing description of the role and dynamics of conscience, one of the best I have ever read:

“In setting before gays and lesbians Christ’s call to perfection the Church also reminds them that they are to respond personally to this call, that central to this response is conscience:  i.e., a properly formed conscience.  Such a response involves more than merely the learning or internalization of moral rules.  Proper formation of conscience requires that an individual make an integral part of himself or herself the ‘Christian principles inherent in the truths that Christ revealed,’ Archbishop [William] Borders [the then archbishop of Baltimore] wrote. As such, they are part of who one is and what one stands for when an individual confronts a concrete situation within which a moral decision must be made.  In making such a decision, ‘the role of the conscience is that of a judge, not a teacher,…conscience does not teach what is good or evil, nor does it create good or evil.  It weighs accumulated data, makes a judgement in very concrete, not theoretical, situations, the concrete situations’ one one’s life, Archbishop Borders continued.

“The ministry of the Roman Catholic Church to gays and lesbians which finds expression in the call to perfection and in the challenge to respond out of a properly formed conscience is always a pastoral ministry.  It is a ministry which is not content merely to repeat the challenge Christ sets before each generation:  it seeks to work with each individual, taking into account that person’s particular strengths and weaknesses, and helping that person make the fullest response possible at this moment in his or her life.”

I’d like to offer a few reflections on these passages.  First,  while I recognize the sympathy and understanding about the social pressures that gay and lesbian people experienced back then, I’ve noticed that such an approach, 35 years later, now seems condescending.  While no doubt gay and lesbian people still experience oppression and marginalization, their consciousness also recognizes and values the gifts they have to offer.  The do not need to be the objects of pity.

Second, I think it is remarkable that an archdiocese was promoting such a realistic view of conscience as an important element of pastoral ministry.  It is a theme that I see emerging in some of the ways that Pope Francis is now talking about pastoral ministry, most recently last week when he encouraged pastoral ministers working with LGBT people to take each situation on a case by case basis.

The Archdiocese of Baltimore’s document went on to suggest additional approaches to gay and lesbian ministry:  treating gay and lesbian people “in a way that communicates a respect for and a valuing of them as persons;”

While it is sad to see that during the pontificates of Pope John Paul II and Benedict XVI, approaches such as the ones that the Archdiocese of Baltimore proposed were quashed and silenced, it is hopeful that perhaps we are seeing a resurrection of these values in some of the methods of pastoral ministry which Pope Francis is proposing for all ministries, not just those to LGBT people.

It’s refreshing to know that, 35 years later, parishes in the Archdiocese of Baltimore are still carrying out the vision of this 1981 document.  Your can find some of these parishes on New Ways Ministry’s “Gay-Friendly Parish List.”