Two women in Italy who had formerly been in religious life celebrated their civil union last week,  just about a year after a priest working in the Vatican  publicly came out as gay.

Federica and Isabel celebrated their civil union in the city hall of Pinerolo, where they live, reported The Guardian. The ceremony was held a day early because “the media were alerted to the story and the couple wanted to avoid a media frenzy.” Mayor Luca Salvai, who officiated for the couple, said the town respected the couples’ desire for discretion and a simple ceremony. Theirs is only the second civil union in Pinerolo, a town near Turin in the north of the country.

The couple met while they were Franciscan sisters working at a rehabilitation center with people suffering from addiction. They left religious life, critical of the church’s teaching on homosexuality, and have entered not only a legal partnership, but will make their marriage vows in an unofficial religious ceremony. Franco Barbero, a resigned priest and friend of Frederica and Isabel, will preside at a religious service for the couple. He commented, reported The Irish Times:

“They are two lovely people, of intense faith and with serious studies behind them. . .They prayed a lot about this and they reflected at length during a difficult process.  In the end, they took their decision knowing that not many would approve….

“Mind you not everyone in the church disapproves…. They were criticised but also understood by their fellow nuns. Just like there are many decent priests who do not condemn this type of choice. I can also tell you too that this is not the first time that I have married two nuns.”

Having exercised their civil rights, the couple affirmed that they remain faithful believers and called publicly for greater respect from the Catholic Church, according to The Telegraph. Isabel said, “God wants people happy, to live the love in the light of the sun,” and Federica added, “We call upon our church to welcome all people who love each other.”

A year ago yesterday, former priest Krzysztof Charamsa came out as a gay man with a similar message. He has offered thoughts on the church in a new book, The First Rock. A Vanity Fair report on the book says the former priest criticizes a culture at the Vatican which “built the perception that homosexuals are sick and pedophiles” as a “move that serves to maintain homophobia within the Church.” Charamsa claimed further that allegations of a gay lobby were false, but propped up by ranking church leaders who “favored a corrupt system that allowed them to hide any suspicion of sexual abuse.” 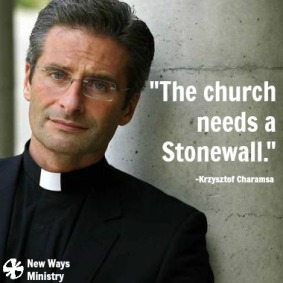 A former Vatican theologian and professor in Rome, Charamsa announced his coming out just days before the 2015 Synod on the Family, a moment that was a “big step for himself and the Church” according to New Ways Ministry. He has since moved to Barcelona with his partner, having been suspended from priestly duties.

In the interim, Charamsa has lectured and written widely, including an appeal to Pope Francis to end the “immeasurable suffering” the Catholic Church inflicts on LGBT people. He has said, “Today, I am a better priest. . .The paradox is that today, I cannot exercise my being a priest,” and that, “The church needs a Stonewall.” To read Bondings 2.0’s full coverage of Krzystof Charamsa’s journey, click here.

Charamsa said in October 2015 that he hoped to be “free, happy, out of the closet, and serving the same ideals and the same values for which I became a priest” in a year. As he celebrates today the anniversary of his coming out, and as Federica and Isabel celebrate their love, may we echo their joy, the joy which comes from living as one’s authentic self, as one is created by God to be.