LGBT Catholics, their families, and their allies are gathering in New York City today for a “Pilgrimage of Mercy.” And around the world every day, LGBT Catholics perform works of mercy for the needy in their communities.  These works sometimes get overlooked by church leaders who don’t take notice of the good that LGBT people do. #LGBTmercy, a new campaign by New Ways Ministry, highlights the many ways by which LGBT Catholics and those who support them act mercifully.

Today’s Bondings 2.0 post invites readers to participate in this campaign, while also highlighting one lesbian woman whose Catholic roots have propelled her to do good.

Building on the Vatican’s #BeMercy initiative in early September, which asked Catholics to share information about the works of mercy they perform, #LGBTmercy recognizes the many gifts and contributions which LGBT Catholics, their families, and their allies offer to the church and to the world.

You are invited to participate in this campaign in three ways:

New Ways Ministry will begin posting photos, videos, and text submissions in early November, leading up to  Christ the King Sunday, November 20th,  when the Year of Mercy concludes.

Covenant House, a leading non-profit with Catholic roots that aids youth experiencing homelessness, has named a lesbian woman as interim director of its newest shelter, which is located in Chicago, reported the Windy City Times. 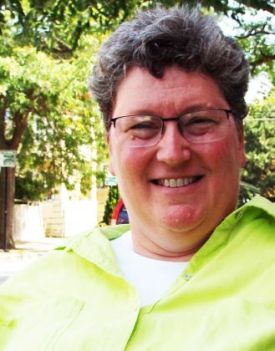 Teresa Cortas, who herself has Catholic roots, began working with Covenant House after graduating college. She spent a year in Anchorage, Alaska, and then Los Angeles, before eventually ending up in Chicago. There, she worked with homeless populations and with HIV-positive women and children for nearly two decades.

Early on, Cortas worked with youth around her age who were questioning their sexual identity and some who had suffered for coming out. She had journeyed herself, and explained that in adolescence church teachings had “essentially ‘shut down’ the exploration of her own sexuality.” Cortas grappled with questions of faith and sexuality while attending The Catholic University of America, Washington, DC,saying:

” I was sorting out what my attachment was to the faith. . .as opposed to ‘is there a faith separate from the church and, if so, what does that look like?’ I lived a lot in my head. It wasn’t until my early 20s that I really began to realize who I was. Prior to that, even though I was approached by many women, it never really occurred to me.

“Then it was conversations of ‘God punishing drug addicts and homosexual men’. . .At the time, I was confused because you could have said the same thing about God giving a person cancer to punish who they were. I was also intrigued to find out more about the [HIV/AIDS] epidemic.”

Cortas eventually came out to her traditionally Catholic family, her parents expressing concern she would get HIV/AIDS or be damned for leaving the church. While she no longer identifies as a practicing Catholic, Cortas still struggles with being forced to leave because “the church has asked me not to be” a member.

Years later, Cortas’ connections with the church have made possible a Covenant House shelter in Chicago. She knew President Kevin Ryan from college and had connected with former president Sr. Mary Rose McGeady. DC, in her earlier work. Cortas pushed them to bring a shelter to Chicago, and now that it has finally happened, she expressed hope and readiness about this new venture:

“Is it going to be an easy process? Not at all. . .I think Chicago has extraordinary youth agencies. My experience with them has been phenomenal. The problem is there is not enough. There is not enough space. The number of homeless kids . . . is astonishing and unacceptable and we have to do something about that.”

Cortas added that it “takes a lot of courage for us to be something other than our families. . .I don’t think enough LGBT [people] realize that. But when you do, you can really begin to fight.”

QUOTE TO NOTE: Remembering Fr. Henry Rodriguez Is a Reminder of Fr. Warren... Pope Francis Says Accompanying LGBT People is “What Jesus Would Do To...
%d bloggers like this:
Scroll to top