While much attention has focused on the mass shooting in Orlando this past week, today’s post features other Catholic LGBT news happening around the world.

Masalles organized a protest outside the OAS meeting which was held in the Dominican Republic, the latest anti-LGBT action from a Dominican hierarchy that has aggressively attacked gay U.S. Ambassador James “Wally” Brewster and his husband, and used anti-gay slurs in the past.

Diego Neria Lejárraga, a transgender man from Spain who had a private audience with Pope Francis in 2015, has published a book. Titled The Cluelessness of God: Travelogues of a Man Who Was Born a Woman, the book details the man’s journey as a transgender Catholic, according to El Periódico. He writes in one part that he did not want to stop being Christian because he transitioned, but simply wanted respect and love, as everyone does.

Pope Francis invited Neria to the Vatican after the man wrote to the pontiff about being rejected by his faith community following his gender transition, including a local priest who called Neria “the devil’s daughter.”

Marilena Grassadonia with wife, Laura, and their children

A recent court ruling has allowed a same-gender couple in Italy to adopt one another’s children. Gay Star News reported:

“The [juvenile court in Rome] said on Friday that Marilena Grassadonia, president of the Rainbow Families association, could adopt her wife’s twin boys; her partner was also allowed to adopt Grassadonia’s son. It marks a legal first for Italy, where strong opposition to same-sex marriage and same-sex adoption from the Catholic Church has slowed legislation on LGBT rights.”

Unfortunately, this ruling does not set a legal precedent. Grassadonia pointed out that families still “depend on individual decisions” when it comes to adoption. Other legal challenges by lesbian parents are already in in the appeals phase. Italy passed a civil unions law earlier this year, but political compromises by Prime Minister Mateo Renzi meant adoption rights for same-gender couples were dropped from the legislation 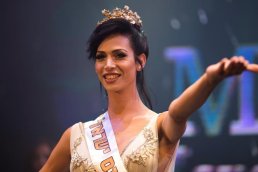 Ta’alin Abu Hanna, who described herself as a “proud Catholic Arab” won the first ever Miss Trans Star pageant held in Israel, reported PinkNews. Hanna, who is from Nazareth, said the win was “historic” and will compete in the Miss Trans Star International pageant later this summer.

Vigil for Orlando Victims Displaces Gay-Negative Lecture at Catholic School If You Love Discussing Catholic LGBT Issues, Come and Meet Others Like You!
%d bloggers like this:
Scroll to top