Note: Bondings 2.0 writer Bob Shine is a 2008 graduate of Saint John’s High School, Shrewsbury, Massachusetts. This open letter is based on correspondence he sent to several school administrators this spring.

Earlier this spring, junior Matthew Barrett asked Saint John’s High School to allow same-gender prom dates. His petition garnered nearly 1,400 signatures, and the effort was widely supported in my conversations with fellow alumni. You can imagine my disappointment, then, when no positive response appeared from school administrators.

It was at Saint John’s that I came to know firsthand the deep harm caused when students are forced to hide and mitigate their authentic selves. These were the experiences of my best friends. Organizing in college and working in LGBT ministry since then has only affirmed this truth. And it has convinced me that, overwhelmingly, the church’s pastoral care for, and inclusion of, LGBTQ people is tragically deficient, despite magisterial statements of welcome and acceptance. Rates of self-harm, substance abuse, and suicide among LGBTQ youth remain sinfully high due to realities such as 84% of LGBTQ youth reporting harassment and 90% hearing prejudiced comments at school, according to the Gay, Lesbian, and Straight Educators Network (GLSEN).

Acknowledging these realities, Catholic education should employ every means available to let LGBTQ students know they are good, as they are created in God’s image, and they can expect full inclusion as members of the community. Many of my close friends from Saint John’s have come out since we graduated in 2008. I cannot speak to the school’s environment today, but I know from their experiences that the high school years can be a traumatizing experience for gay, bisexual, and questioning students, even in schools offering the highest quality education.

Allowing same-gender prom dates would contribute positively to creating a safer space at Saint John’s, and it would also advance the school’s mission “to bring Christ to life in young men.” There is an evangelical aspect to becoming more inclusive, which invites your students to know the church we love as a place of mercy and of inclusion, rather than hostility and exclusion. These ideas are very much in keeping with the  mission of the Xaverian Brothers who sponsor the school.

For your consideration as you weigh this request from students, I highlight two instances where Catholic education allowed same-gender prom dates. Archbishop Denis Hart of Melbourne, Australia, approved such a policy this past January, saying “These are quite often emotional situations and it’s very important that we always have respect for the dignity of the human being involved.” McQuaid Jesuit High School in Rochester, New York approved same-gender dates in 2013. Fr. Edward Salmon, the president, cited Pope Francis when explaining his decision and wrote:

“[Gay people] as is true of every human being, need to be nourished at many different levels simultaneously. This includes friendship, [brotherhood] which is a way of loving and is essential to healthy human development. It is one of the richest possible human experiences. Friendship can and does thrive outside of sexual involvement.”

Allowing same-gender prom dates and recognizing the Gay-Straight Alliance students have organized for St. John’s would be big steps towards greater pastoral care. It may not seem much, but in this instance welcoming a diversity of prom dates could be considered pastoral care if it actively helps students experience further the inclusion, acceptance, and love that God offers us. I pray that you may hear the voices of your students with God’s ears and respond as Christ would with mercy and with understanding. 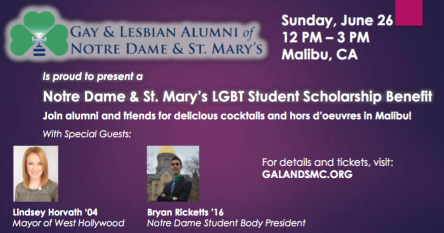 For those interested in the betterment of life for LGBT students in Catholic education, the Gay & Lesbian Alumni of Notre Dame & St. Mary’s will be hosting a fundraiser for LGBT student scholarships in California. It will be Sunday, June 26, 12:00pm to 3:00pm in Malibu, CA. For more information and to register (requested before June 17th), please visit www.galandsmc.org.