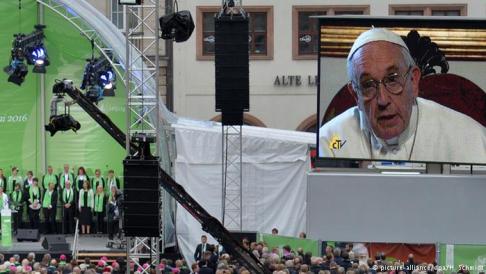 LGBT organizations were welcomed for the first time to a major Catholic gathering in Germany, an historic step by which Catholics are living into the church’s more inclusive and justice-oriented future.

Katholikentag, or Catholic Day, is a high-profile, biennial conference organized by the lay-led and LGBT-supportive Central Committee of German Catholics (ZdK). Catholic Day, which celebrated its 100th anniversary this year, was attended by 30,000 people and featured more than 1,000 exhibitors and events, according to Terence Weldon of Queering the Church. He reported:

The Catholic Lesbian Network’s Manuela Sabozin said this welcome is more than toleration because they have been “able to push our themes to the fore.”

Those themes became programming events, including a forum on marriage equality, a workshop called “Cross and Queer” on gay communities in the church, and spirituality events. The organizations worked from a Rainbow Center hosted at a Protestant church. Other LGBT events included concerts by Leipzig’s gay choir and an LGBT Christian musical group called “Queerubim.” Church reform organizations that advocate for other progressive issues exhibited at the meeting as well.

Catholic Day’s influence and that of ZdK generally are evident in the number of church and political officials who participate, including an official message from Pope Francis. Notable ecclesial attendees included Cardinal Reinhard Marx of Munich and Freising who also is the President of the German Catholic Bishops Conference, and Archbishop Heiner Koch of Berlin. Public officials included German President Joachim Gauch, who offered a keynote address, and openly gay legislator Stefan Kaufmann who spoke about marriage equality.

Weldon observed that inviting LGBT organizations to Catholic Day is “of major importance” because of the central role ZdK plays in the German church despite its formal independence from ecclesial structures. Weldon quoted a conservative news outlet which said this year’s Catholic Day gives “witness to the revolutionary power of the Central Committee of German Catholics.” Deutsche Welle also commented on the significance of welcoming LGBT groups:

“In fact, the presence of Kaufmann with three of the most important gay and lesbian Catholic advocacy groups in the country shows that the ZdK is willing to take an openly progressive position, and controversial in equal measure, with regards to the type of church it wants to promote.”

It is important to note that the three organizations invited by ZdK were not simply pastoral ministries seeking greater welcome. These organizations are truly radical on LGBT inclusion and demand the fullness of justice from the church. ZdK itself took the bold step last year of calling on the Catholic Church to bless same-gender unions in church. Issues concerning LGBT people and their families were openly and freely discussed at Catholic Day.

Deutsche Welle concluded its coverage of this year’s Catholic Day by noting a strong progressive movement among the laity:

“. . . [I]t is possible to make out the sketch of the church that German Catholics envision. . .[one that is] already diverse, complex and lively.”

Catholic Day’s theme this year was, “People First: What should we want and do for people of today to live together in the future?” This marvelous question is one the church universal should reflect upon.