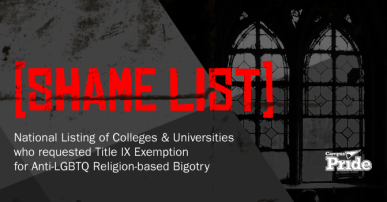 The National Collegiate Athletic Association (NCAA) will not disassociate from religiously-affiliated colleges, including some Catholic ones, that have requested Title IX waivers. Such waivers would allow schools to discriminate against someone based on the person’s sexual orientation, gender identity, and/or gender expression.

LGBT organizations Campus Pride and Soulforce requested, in a letter to NCAA officials, that the NCAA disqualify schools which fail to protect LGBT students by seeking such exemptions. NCAA Chief Inclusion Officer Bernard Franklin responded in his own letter, defending the Association’s record on LGBT issues and deferring the matter of Title IX waivers to the U.S. Department of Education’s Office of Civil Rights.

Title IX of the Education Amendments of 1972, which prohibits sex-based discrimination, has been interpreted recently to include LGBT protections. While religious exemptions are not new, application of these provisions has risen sharply as civil rights based on sexual and gender identity have expanded. 43 colleges requested exemptions in 2015 compared to just one college in 2013.

At least five Catholic colleges are among those who have requested such exemptions, according to a report from the Human Rights Campaign. These include Belmont Abbey College in North Carolina, Franciscan University of Steubenville in Ohio, John Paul the Great University in Wyoming, St. Gregory’s University in Oklahoma, and the University of Dallas in Texas.

Schools which receive exemptions are essentially enabled to discriminate at will on the basis of sexual and gender identity. Jocelyn Sun of Soulforce, writing at Believe Out Loud, explained further why such exemptions are so deeply problematic:

“Title IX isn’t just about LGBTQI students in faith-based institutions. . .It’s about debunking the myth that you have to choose between being a Christian and all the other identities God gave you. It’s about educators not having to pick between investing in and building trust with students and making a living. It’s about holding our universities accountable to be the community we’ve dreamed of and are working hard to create.”

The NCAA’s decision not to sanction colleges which have sought Title IX exemptions is puzzling because it seems wrong to include schools in its athletics programs that institutionally advance prejudice. These exemptions also highlight the difference between the many Catholic colleges supportive of LGBT students and the five schools seeking exemptions. While there is a lot of progress to celebrate, there is much work to be done in college athletics and in Catholic higher education.