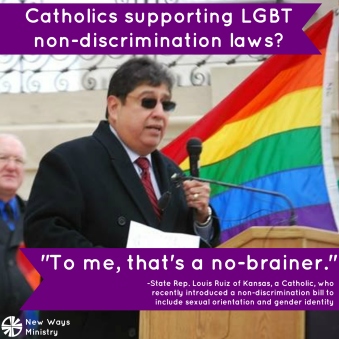 This widespread Catholic support for civil rights is driven by strong support from the lay faithful. For instance, James Rowe, a Catholic who is and the executive director of Believe Out Loud, said it is the mission of LGBTQ Christians and allies to “mobilize love” when anti-LGBT religious groups seek to institutionalize their discriminatory theologies. Rowe reflected on his own Catholic faith in view of South Dakota’s HB 1008 which would have mandated students use restrooms and locker rooms according to their assigned at birth sex:

“My Catholic teachings tell me that Jesus stood in solidarity with those who are most often bullied and ostracized by others—and I believe today, Jesus would have been in Pierre, South Dakota, standing at the steps of the Capitol building demanding that Governor Daugaard veto this harmful bill.”

Believe Out Loud joined LGBT, educational, and civil liberties organizations in delivering 80,000 signatures opposing the bill, which was thankfully vetoed by the governor earlier this week.

Buzzfeed reported at least 105 similar pieces of legislation at the state level which seek to curtail civil rights rooted in sexual and/or gender identity, or allow the denial of services to LGBT people. None have yet passed, but there is momentum in at least eight states.

Unfortunately, the church’s leadership differs from the faithful, despite Catholic teachings which say every sign of unjust discrimination must be opposed. South Dakota’s bishops, Robert Gruss of Rapid City and Paul Swain of Sioux Falls, released a letter expressing their support for HB 1008. Religious leaders’ opposition and legislators’ questionable coupling of Church and State can create a belief that LGBT and religious belief are at odds with one another in these debates. It is a frequent refrain here at Bondings 2.0 that Catholics support LGBT justice because of their faith and not in spite of it.

Mychal Copeland, who co-edited Struggling in Good Faith, an interfaith anthology about LGBTQI inclusion, challenges the idea that LGBT justice and religious belief are at odds.  In Copeland suggested that currently “every American religious tradition is engaged in a struggle about LGBT inclusion” and there are changes happening, even if quite slowly. He continued:

“[T]here is a prevailing assumption that individuals will hold anti-LGBT religious doctrine above other religious ideals. More and more religious leaders and lay people are prizing overarching principles of faith, such as compassion, love, dignity, and welcome over negative religious legislation. . .Americans are more likely to see that [LGBT] individual as someone who should be able to rent an apartment, keep a job, and even marry the one they love.”

Church teaching does not allow for discrimination, meaning it should be unthinkable that Catholics would support any “right to discriminate” bills or oppose nondiscrimination protections. Sadly, this is not the case. If church teaching does not suffice, then perhaps we need to appeal to the deeper love expected of Christians by Jesus. It is Jesus’ kind of love which led early Christian writer Tertullian to note how his pagan contemporaries said, “See how those Christians love one another.” Catholics are certainly supportive of LGBT communities because of this love, but we must keep working to ensure that our church and our Christian faith are not used any further to deny the civil rights due to LGBT communities.