There’s a feeling you get when you’re in the presence of someone holy. It’s different than when you meet a celebrity. With a celebrity, you feel awe because of their reputation, and tend to feel a little diminished in yourself. When you meet someone holy, you feel a mixture of awe and ease.  You are astonished at the goodness that radiates from that person, and at the same time, the person’s humble presence makes you completely relaxed.

Awe and ease are what I felt when I met Colleen Simon two weekends ago.  If you are a regular reader of Bondings 2.0, you will recall that Simon had been fired from her job as social justice director at St. Francis Xavier parish in Kansas City a few years ago, when a newspaper story inadvertently mentioned that she was married to another woman. 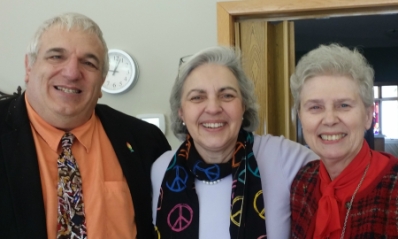 New Ways Ministry’s Francis DeBernardo (left) and Sister Jeannine Gramick (right) pose with Colleen Simon (center) on the day after the diocese settled out of court with her.

I was in Kansas City with my colleague Sister Jeannine Gramick for a couple of events focused on Catholic LGBT ministry.  It turned out to be the day after news had broke that the Diocese of Kansas City, Missouri, had settled a lawsuit that Simon had brought against them and former Bishop Robert Finn, concerning her unjust firing.  I would have expected a person in her situation to be beaming victoriously, but instead, she was humbly matter-of-fact about the case.

According to The Kansas City Star, neither party would discuss the amount of the settled suit, in which Simon had been asking for “unpaid wages, fringe benefits, compensation for emotional distress, punitive damages and attorney fees.”  The newspaper reported that Jackson County Judge Kenneth R. Garrett dismissed one of Simon’s allegations in the case because it would have crossed into areas of canonical law, which the secular court is unable to adjudicate. Simon charged that the priests who hired her had committed fraud when they told her she would not be fired because of her sexual orientation and relationship status.  However, the other parts of the suit were able to advance towards trial, the judge said.  The Kansas City Star reported this possibility motivated the diocese to settle:

“Garrett declined to dismiss questions regarding whether the diocese had failed to issue a service letter detailing Simon’s employment that met requirements called for under Missouri law and whether Simon’s employment status qualified her for overtime pay when she worked more than 40 hours a week.

“ ‘These unsettled … issues are the province of the jury,’ Garrett wrote in his ruling.

“The diocese did not want those matters discussed in court, said E.E. Keenan, a Kansas City lawyer representing Simon.

“ ‘For over a year and a half, the diocese fought hard to prevent Ms. Simon’s case from going to a jury,’ Keenan said. ‘We feel good that this judgment affirms the ability of church employees who are wronged to seek justice in our courts.’ “

“E.E. Keenan, one of Simon’s attorneys, told NCR that the court’s determination that the First Amendment prevented it from ruling on the fraud claim did not indicate how it viewed the merits of the claim.

“ ‘We continued and continue to contend, according to the amended petition, that she was not told the truth going into her employment,’ he said.”

My praise for Simon, with which I began this blog post, is not just my opinion alone.  Kansas City Star columnist Mary Sanchez had similar high praise for her:

“In the end, the person dismissed under a religious dictate proved to be the one behaving the most godly.

“Colleen Simon never intended to throw down an ultimatum to Catholic doctrine or to challenge the faith’s constitutional religious freedoms.

“She simply wanted to serve the poor. She wanted employer commitments upheld.”

Sanchez discussed a quality I observed immediately in Simon:  her humility.  Sanchez wrote that Simon shunned publicity, and tried not to cause division at the parish where she had worked. But she went ahead with her suit because of her concern for justice in the Church:

“Simon averted embarrassment to St. Francis Xavier and lessened pressure on the diocese by discouraging several planned protests. She seemed to dodge the outrage that some wanted to exhibit on her behalf. An online petition gathered more than 20,000 signatures.

“She seemed conflicted about being a public symbol as national press began calling. Repeatedly, she’d cite her desire to work with people on the margins of society as her primary calling, not a lawsuit.

“But the fact that other gay and lesbian people are in similarly precarious predicaments also weighed on her. They serve as teachers in parish schools, lead choirs and fill non-clergy roles. Some of them likely fear that one false step, one disgruntled person with connections, could threaten their employment.”

Simon is only one of a handful of fired LGBT employees to have some sort of victory in a court challenge. Matthew Barrett, whose contract as food service director at a Massachusetts Catholic high school was rescinded when the administration learned he was married to a man, won a discrimination ruling against the school from a state court earlier this year.  The National Catholic Reporter also mentioned the following cases:

Simon has moved on in her career.  She now works for Journey to New Life, a non-profit which helps ex-inmates adjust to their new lives outside prison.  It is life-giving work both for them and for her.  Obviously, God is still using her as an agent for justice and reconciliation in the world even if the Diocese of Kansas City won’t allow her to do so professionally.  Her gifts are still being used to help make God’s Reign real on earth, as it is in heaven.

Sanchez let Simon have the last words in her column, and I will do the same, quoting the concluding paragraphs of Sanchez’ essay.   These are words which remind us to reflect not just on what we should do in the world, but on how we should do it:

“Perhaps Simon’s story caused many people to mull their consciences, to examine their beliefs more deeply.

“That is one of the greatest rewards and challenges of any faith.

“As Simon wrote in her farewell address to parishioners: Life is not so black and white, so “us against them.” … I think that life is about how we are in relationship with each other and that has many nuances and complexities.’ “

For Bondings 2.0‘s full coverage of this story, and other LGBT-related church worker disputes, click the ‘Employment Issues‘ category to the right or here. You can click here to find a full listing of the more than 60 incidents since 2008 where church workers have lost their jobs over LGBT identity, same-sex marriages, or public support for equality.