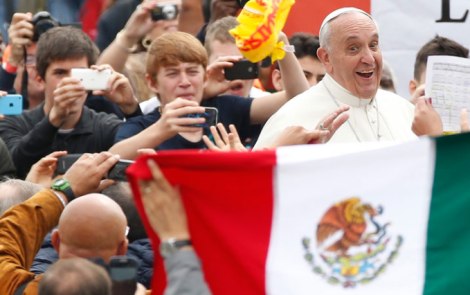 Pope Francis with crowds in Mexico

Preceding Pope Francis’ visit to the Mexico-U.S. border on Wednesday, an outlet called Borderzine published an article in which they interviewed gay Catholics living near the border about their excitement in getting to see the pontiff in their region.

Benjamin Alire Sáenz, a former priest and gay Catholic, said of the pontiff:

” ‘I love that he is coming here. . .[He] represents Catholicism, but in all of its diversity. . .He doesn’t condemn people just for being gay, so that certainly makes me feel like at least he is thinking about us. He is not just dismissing gay people and I think that says a lot.’ “

Gilbert Lopez, a Catholic student at the University of Texas, El Paso, said Pope Francis’ compassionate words, especially his famous “Who am I to judge?” remark, helped him come out as gay. He told Borderzine:

” ‘When I was not accepting of my sexuality, when I would come in contact with homosexuals, it was either you’re religious or you’re not. . .A lot of homosexuals get discouraged and it is really sad how they turn against God and against religion because of how rough people can act.”

Lopez expressed hope that with Pope Francis’ attitude of “Who am I to judge?”, the Catholic Church will expand its acceptance of LGBT people. And he reiterated his excitement about the border visit, stating he would attend “as a Latino, as a Catholic and as a gay man” and the experience will “bring all of these me’s together.”

Given Pope Francis’ recent and repeated condemnations of marriage equality, as in his meeting with Russian Patriarch Kirill or while addressing the Roman Rota in January, why do some LGBT Catholics and their allies remain excited by or hopeful about this pope? I believe the answer, at least partially, is evident in examples from his apostolic visit to Mexico.

1. Pope Francis is demanding better bishops. He comprehends that, in a world where many are skeptical of religious institutions, only authentically pastoral leadership that prioritizes mercy will suffice. Addressing Mexico’s bishops, the pope said the present moment “requires pastoral attention to persons and groups who hope to encounter the living Jesus.” He added, “Only a Church able to shelter the faces of men and women who knock on her doors will be able to speak to them of God. If we do not know how to decipher their sufferings, if we do not come to understand their needs, then we can offer them nothing.” In LGBT communities and among their loved ones and friends, many seek God but are stymied by the church’s ministers and structures. Because for decades they failed to listen or show a spirit of encounter, many in the hierarchy are woefully inept at expressing compassion for LGBT people’s sufferings or knowing their needs. This problem leaves the church incapable of receiving LGBT people’s gifts in their fullness. Pope Francis’ bishop appointments are helping renew the church’s leadership and so too are his exhortations to his brother bishops.

2. Pope Francis sees family in a wider context. He clearly disapproves of same-gender marriage and says so, but Pope Francis diverges from other church leaders by refusing to focus on this opposition when discussing family. Addressing families at a stadium in Tuxtla-Gutierrez,  he said the family was “on different fronts. . .weakened and questioned” and again referenced ideological colonization in ambiguous terms. But Pope Francis did not include marriage equality as a threat, instead highlighting contemporary tendencies towards fear of love, social isolationism, and an obsession with wealth as three major detriments to family life. Before his speech, a divorced and civilly remarried Catholic couple and a single mother spoke to the crowd. Their remarks were then referenced positively by the pope. Pope Francis and I may not agree on precisely what constitutes family or what threatens marriage, but we do agree on the importance of family and the church’s mandate to provide pastoral care for all families. I believe that is the essential common ground from which new conversations about family life, already underway in the synodal process, can really flourish.

3. Pope Francis opposes the violence of exclusion. He acknowledges what Protestant theologian Miroslav Volf calls the “violence of exclusion.” Addressing workers, he rejected modern economies which exclude people and promote a throwaway culture. He said, “We all have to struggle to make sure that work is a humanizing moment which looks to the future; that it is a space for building up society and each person’s participation in it. . . [to] transform society into a culture capable of promoting a dignified space for everyone.” More than 60 church workers since 2008 have been “thrown away” by the church, having their jobs because of LGBT issues. These injustices deprive them of work which is humanizing and deprive the church of these workers’ transformative labor. Pope Francis may not yet fully comprehend the ways in which the church itself harms people, but it would not be a stretch to flip his concern for exclusion by the church back onto the church. Indeed, the thousands of Catholics who oppose church worker injustices testify to this.

4. Pope Francis rejects parameters on God’s love. LGBT Catholics and their loved ones have too frequently experienced fellow Catholics explaining God’s love in ways that are restrictive. Denying sacraments to people or refusing to recognize the existence of divine love in one’s relationship or the holiness of one’s identity are all ways parameters are falsely imposed on God’s love. Pope Francis rejects this attitude forcefully. Addressing prisoners, the pope again said God’s love is expansive, ever present, and exists for all people, saying:

“United to you and with you today, I want to reiterate once more the confidence that Jesus urges us to have: the mercy that embraces everyone and is found in every corner of the world. There is no place beyond the reach of [God’s] mercy, no space or person it cannot touch.

During his many apostolic trips since 2013, Pope Francis routinely prioritized visits to places and with communities which exist on the world’s margins, such as Ciudad Juárez and U.S.-Mexico border. By his own admission, the pope seeks to bring God’s love and the world’s attention to these places. He does not yet pay enough attention to those existing at the church’s margins, such as LGBT people, but by leading the church to be a “poor church for the poor,” he is creating space for Catholics to go to the margins of our church and to then center the experiences of those marginalized. That is where we come in and why I share in the hopes of Lopez and Sáenz described at the beginning of this post.

For those concerned with building up a just and inclusive Catholic Church, there are reasons to hope in the era of Pope Francis. There remain deep problems, too, found in unhealed wounds and newly imposed sufferings. But each time Pope Francis travels and I follow his visits, watching videos and reading texts, I find myself uplifted. He is not the pope who will suddenly perform a same-gender wedding ceremony on the high altar of St. Peter’s. He will not be ordaining a woman. But he is the pope saying, “Go out into the world and minister in the reality of life!” And once that happens, the fact is the church, led by the Spirit, cannot be unchanged by encountering the beauty of God’s people in all our diversity.

Church renewal is always acknowledged after it already has happened.  For instance, the recent approval of washing female feet on Holy Thursday reflected a changet that was already a living reality for many Catholics. Right now, the church is changing even if we cannot see it or church leaders refuse to acknowledge the transformation. Now, more than ever, is the time for us to step into this freer space created by Pope Francis and carry out our work for justice in the church. As a group of migrant women, who walked 100 miles to see the pope, chanted: “Francisco, escucha! Estamos en la lucha!” Yes, Pope Francis, listen. We are in the fight indeed.