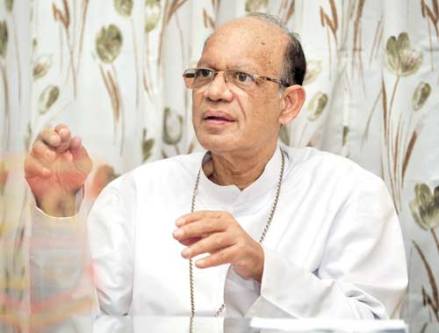 India’s top bishop supports the legalization of homosexuality in his country, which may now be possible that the nation’s Supreme Court is reviewing the issue. His acceptance is hopefully leading more Catholics to their own acceptance of LGBT people, too.

” ‘I have met some groups and associations of LGBTs and I had an understanding for them. I don’t want them to feel ostracised. . .I feel that homosexuality should not be criminalised. For me it’s a question of understanding that it’s an orientation.’ “

The cardinal, who heads the Catholic Bishops Conference of India as well, said, given the choice, “why would you be harsh” and reject people from society instead of loving them. Though he does not accept the validity of same-gender marriages, Gracias said this “does not mean you throw out these people as bad.” He explained, too:

” ‘I believe maybe people have this orientation that God has given them and for this reason they should not be ostracised from society. The Church is concerned, and if you’re Christian or Catholic and if you’re part of the Church you have to have compassion, sympathy and understanding toward them.’ “

These are not Cardinal Gracias’ first compassionate words for marginalized communities. Interviewed by Bondings 2.0’s Francis DeBernardo at last year’s Synod on the Family, the cardinal told LGBT people that the church “wants you, needs you, embraces you.” When India’s Supreme Court recriminalized homosexuality in 2013, Gracias was the only religious leader in India to oppose this controversial move publicly . He has also instructed priests in his archdiocese to exercise greater sensitivity and compassion when discussing sexuality and gender.

The Supreme Court of India said earlier this week it would reconsider whether homosexuality should be criminalized. This rare “curative petition” will subject the Court’s 2013 ruling to a five-judge constitutional bench. Though it is an uphill battle, that the court took this case at all could lead to expanded justice for lesbian, gay, and bi Indians, reported Buzzfeed.

There is and will be resistance from some Catholics, which represent Indian society overall, because many hold sharp prejudices.  For LGBT people, invisibility is the preferred form of social acceptance. But there are others who, like Cardinal Gracias, wish to see LGB people more welcomed in society and even in the church. An article from Open Democracy cited one example which revealed a more accepting, though because of all its complexities, a far from perfect approach:

“Geof, a traditionalist Catholic male confessed, ‘After watching LGBT guests on Aamir’s show [a popular television talk show],  I was reduced to tears. These are real people, making the best of traumatic circumstances they were born into. For long I’ve judged them because I didn’t ‘know’ them. May I add that I’m a straight male who won’t turn gay because of the show. I also support Pope Francis all the way!”

Another Catholic, a retired teacher named Edith, said that before there was no language for LGBT students who suffered intense bullying. She now calls for acceptance:

” ‘They are mocked by other children who are products of a hate-filled heteronormative society. I know for sure that these kids were born this way and not deviants who chose a sinful, promiscuous lifestyle. Their lives are difficult enough. Let’s stop condemning.’ “

These perspectives from Indian Catholics reveal an emerging consciousness that Cardinal Gracias represents about the need to defend LGBT people’s human rights.

For many U.S. and European advocates, the notion that simply advocating for the legalization of homosexuality, while not approving of marriage, could be difficult to understand. Yet in other contexts, like Indian society or the current political debates in some African nations, Cardinal Gracias’ appeal for loving acceptance is radical. To come out as LGBT in hostile areas could mean discrimination, violence, even death at much higher rates.

Cardinal Gracias is a Catholic official who is saying simply that we must accept people’s identities rather than punish them.  In his cultural context, that certainly is prophetic.