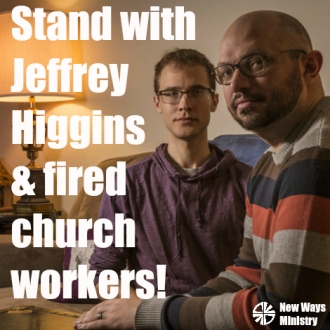 Catholics near Washington, D.C. will rally this weekend in support of fired church worker Jeffrey Higgins, whose dismissal has stimulated reflections from Cardinal Donald Wuerl and others on the crisis with LGBT church workers. Michael O’Loughlin of Crux reported:

“For nearly two years, Jeffrey Higgins led parishioners in song at Mother Seton Catholic Church in Germantown, Maryland, at three or four Masses each weekend. But this Sunday, he’ll find himself outside, joining protesters upset about his firing as a part-time cantor following an anonymous complaint that he married his longtime partner.”

You can read about Higgins’ firing by clicking here. The fired cantor is strong in his Catholic identity. He told Crux:

” ‘I was baptized Catholic, I was confirmed Catholic, and I’m still Catholic. I don’t think this will affect my relationship with the Church. . .I’m hoping the Church will someday be a more welcoming and accepting place.’ “

The rally, scheduled for Sunday, January 10, 2016, 8:30 a.m. to 12:15 p.m,, across the street from Mother Seton Catholic Church, where Higgins worked, located at 19951 Father Hurley Boulevard Germantown, Maryland, is organized by DignityUSA and Dignity/Washington,  You can get more information by clicking here.

Cardinal Wuerl, recently called “The Pope’s Man in Washington” by Religion News Services’ David Gibson, defended Higgins firing in a recent blog post. Wuerl said that while the “outcome is unfortunate,” it is not discrimination and explained:

“However, if one persists or effectively insists that they are right and the Church is wrong, in the face of such irreconcilable differences it is not discrimination or punishment to say that continued ministerial service is not possible. It is not a question of personal private activity, but the social consequences of conduct which undermines the Church’s ability to fulfill her mission. When there is the potential for scandal that might lead people astray regarding the Catholic faith, continued service becomes untenable.”

Citing his own pastoral letter, “Being Catholic Today,” he added that “when we give bad witness, we can lead people away from Christ.” Absent is any pastoral concern for Jeffrey Higgins, his husband, the affected parish community, or Catholics generally who are hurt by discrimination in our church.

Michael Sean Winters of the National Catholic Reporter commented on Wuerl’s post and, more broadly, the firing of LGBT church workers. Winters’ comments are not quite positive for LGBT church workers, but there are some notable points. First, he questioned the scope of what constitutes “bad witness,” to quote Cardinal Wuerl, and concluded:

“If we are going to require all ministers to be upstanding Catholics, it would be good to know that this requirement applies to those who dissent on non-pelvic issues too.”

Second, Winters also picked up on why Higgins was fired, namely stalking by anti-gay parishioners who researched the cantor online after seeing Higgins and his husband at a movie together. Winters wrote:

“This is important because the Church does not want to give a heckler’s veto to anti-gay vigilantes who might comb through court records at the marriage bureau and crosscheck them with parish rolls. . .We are the Catholic Church in 2016 not Salem, Massachusetts circa 1692.”

Winters cited the case of Rick Estridge, a former vice president at Catholic Relief Services who resigned after a right wing activist outed by posting Estridge’s marriage license online. These cases are not isolated incidents, and many of the firings that have happened over the past seven years have been because of “vigilante” snooping. (For all known cases of firings and other employment disputes because of LGBT issues since 2008, you can click here to find New Ways Ministry’s resource page on the issues.)

Third, Winters commented on the ministerial exemption by stating the church leaders should not simply call all employees ministers “in hopes of increasing legal wiggle room to terminate employees as needed.”  Catholics can expect that the church expands its theological and pastoral understandings of ministry without demanding expansions in unrelated legal matters.

Where Winters falls most short is his belief that a case-by-case handling of church worker issues is the right solution to respecting their dignity. Nondiscrimination policies applicable to LGBT and Ally church workers should become standard, so space for discretionary discrimination by a particularly zealous pastor or principal is eliminated.

These firings are now a “major scandal” in the words of Loretto Sr. Maureen Fiedler, who included a condemnation of them from Pope Francis as one of her “Catholic Dreams in 2016,” writing:

“[W]hile 2016 may be a bit early for him to change his views on same-sex marriage, he could make clear that he does not agree with firing personnel in Catholic institutions because of their orientation, or because they married someone of the same sex. These discriminatory firings have become a major scandal.”

Cardinal Wuerl did get one truth (mostly) correct, writing in his conclusion:

“The Church we serve is not ours, but Christ’s. The greatest mercy of the Church is to be faithful witnesses of his truth and love.”

Jeffrey Higgins and other fired LGBT church workers served the church in their positions and they serve the church in protest, as well. The Catholics standing outside Mother Seton Church on Sunday are demanding that the church be a faithful witness to Christ’s truth and love, rather than ceding our institutions to discrimination and prejudice.