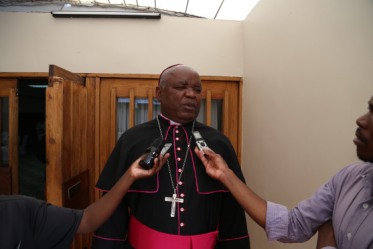 LGBT communities in a number of African nations face some of the world’s most oppressive contexts. Worse yet, socially-sanctioned discrimination and violence are supported and even encouraged by religious leadership. Two recent incidents in Malawi, which is 20% Catholic, reveal how church officials contribute to homophobia and transphobia.

Bishop Mathews Mtumbuka of Karonga told a women’s gathering that lesbian and gay people are “sinners who need to repent,” adding that Scripture’s condemnation of homosexuality is clear. These comments come just as the nation’s government dropped charges against Cuthert Kulemeka and Kelvin Gonani for homosexual activity, both of whom were forced to undergo invasive physical examinations while in custody reported All Africa.

In a separate incident, Bishop Montfort Sitima of Mangochi addressed homosexuality negatively in a homily last Sunday, according to All Africa. Despite saying the church “does not hate” gay people, the bishop applauded a Catholic musician, Lucius Banda, who cancelled a concert on Christmas Day after observing two male audience members kissing each other. A human rights advocate noted that it would very unlikely for a gay couple to kiss publicly in Malawi, and suggested that the whole event was staged to stir up anti-gay sentiments, according to Nyasa Times.  Banda is a member of Malawi’s Parliament.

Sitima also said Malawi’s government “should not sell out our culture and our religion in exchange for money,” referencing the generally false but popular notion that Western foreign aid is tied to LGBT human rights. This connection between LGBT human rights and international aid was explicitly included in the Synod on the Family’s Final Report, presumably at the insistence of African bishops who present it as a new form of colonialism.

This reality of LGBT oppression, Catholic leaders’ complicity, and the colonial history of unjust Western interventions in Africa raise questions about how LGBT advocates in the U.S. can justly respond.

A recent article in The New York Times claimed that U.S support for LGBT human rights is backfiring in Africa, where the federal government has spent more than $350 million since 2012. Private support is increasing, too, as U.S. advocates seek to work internationally, following major victories at home. This work seeks, in part, to counter influential U.S.-funded Evangelical groups promoting anti-gay laws abroad.

Increased visibility is actually leading to more anti-LGBT discrimination and violence in the estimation of some advocates. Rev. Kapya Kaoma of the U.S.-based Political Research Associates suggested that “African L.G.B.T. persons are just collateral damage to U.S. politics on both ends.”

But not all agree, including Frank Mugisha of Sexual Minorities Uganda, who is Catholic and wrote in The New York Times:

“There will always be backlash to activism. That is not news.

“Instead of elevating the significance of American influence, it would have been better if the article had focused on African politicians who employ any narrative at their disposal — including ‘neocolonial’ ones — to maintain their power at the expense of scapegoated minorities like L.G.B.T.I. people, regardless of what the United States may, or may not, do.

“Is there more violence now that L.G.B.T.I. people are more visible in Nigeria and elsewhere? Maybe, but it is homophobia, not funding, that is at fault.”

Catholic officials could easily be added to the African politicians Mugisha labeled as those who use anti-LGBT sentiments for their own purposes. In conveying church teachings on homosexuality, church leaders like Bishop Mtumbuka too often rely on a biblical fundamentalism at odds with Catholic principles for scriptural interpretation. They ignore, almost entirely, relevant Catholic teachings about LGBT people related to social justice. Bishops like Bishop Sitima employ false narratives, like homosexuality being a Western import or Western governments denying aid to nations without marriage equality, with dangerous repercussions. Neither one of the Malawian bishops condemned the human rights abuses enacted against Cuthert Kulemeka and Kelvin Gonani, even though their treatment was contradictory to Catholic teaching.

Why do Catholic bishops in Africa behave in this fashion? There are likely many as many reasons as bishops. Perhaps the expansion of Evangelical churches in Africa has something to do with their statements. Christianity is exponentially exploding among Africans, and denominations are fighting for adherents. Established Catholic and Protestant churches are struggling to retain adherents against successful Evangelical and Pentecostal efforts. Similar to politicians scapegoating LGBT people for electoral victories, Catholic officials may fear being seen as ‘weak’ on homosexuality.

These complex situations leave U.S. and other Western LGBT advocates puzzled when it comes to human rights work in Malawi, Uganda, and other nations which criminalize and stigmatize minority sexual and gender identities. Frank Mugisha makes clear, though, that, ultimately, we are united in the fight against homophobia and transphobia wherever we live.

For Catholics, as members of the universal church, we cannot abandon this work as long as oppression exists. Moving forward, we must ensure that not only the ends we seek, but the means  with which we seek them, are just on all accounts. Catholic Social Teaching is one of the richest sources for figuring out how to do just that, and the Year of Mercy is the perfect time to recommit to seeking justice for LGBT people around the world.

Bishop Paprocki Responds to Newspaper Letter on Communion DistributionCatholics Should Not Wait for Courts on LGBT Church Workers' Rights
Scroll to top
Loading Comments...
%d bloggers like this: