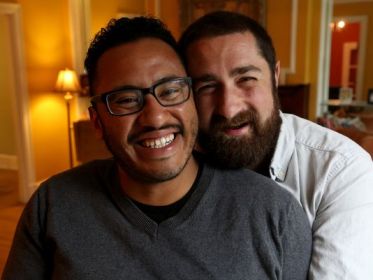 News headlines tend to focus on what bishops say and how they act regarding LGBT issues in the church, but focusing only on the hierarchy can distort the reality of the Catholic faith as it is lived locally. A recent piece in the Detroit Free Press helps correct this distortion, sharing the story of a same-sex couple and their experience of being warmly welcomed in the church.

Bryan Victor and Thomas Molina-Duarte are faithful Catholics and, since moving to Detroit in 2012, they’ve been parishioners of St. Charles Borromeo Church. Described as an “integrated and active” place, this parish  welcomes all “the real-lived experience of people,” said Victor including him and his husband.

Both expressed that being Catholic is central to their lives, though relating to the church has not been without challenges. Victor and Molina-Duarte each said they stepped back from the church for a time, but they began attending Mass together after meeting each other in 2010.

Now, Victor explained, they “remain in the church rather than leaving” and are open about their sexual identities and marriage. Molina-Duarte, who said the challenges are now an “afterthought,” expressed why the couple remains but refuses to be closeted:

” ‘You’re called to be in community and seek justice and how can you do that in a closet?’ “

Victor, a social worker, said further that faith both guides him and provides community:

” ‘I carry that Gospel message out to the secular world, and my work is reflective of the church. . .I am sustained and nourished by the church. I’m sharing my gifts and talents within the church.’ “

On the question of Communion, about which Detroit has experienced controversy because of Archbishop Allen Vigneron’s previous suggestion that marriage equality supporters should refrain, Victor added:

It is worth noting that this informed conscience decision is precisely what Chicago’s Archbishop Blase Cupich called for the church to respect in a recent interview.

Victor and Molina-Duarte married earlier this fall, saying they were “driven to our marriage by our faith” and not simply marriage equality’s legalization. Though their ceremony was held at a nearby Protestant church, the couple is welcomed together by their Catholic parish. The Free Press reported a recent example of this welcome. Capuchin Fr. Ray Stadmeyer, the pastor, calls forward those who had birthdays and anniversaries for a blessing at the end of Mass each week. When Molina-Duarte came to the front on his birthday, Stadmeyer said the following:

” ‘Bless our brother Thomas. Bless him in his relationship. . .We thank him and Bryan for all the goodness they bring to us. May they know God’s tender graces.’ “

Molina-Duarte and Victor are warmly accepted by another priest, Fr. Ronald Victor, who is the latter partner’s uncle. Of the couple, Fr. Victor said:

“They are two very holy guys. . .I do see their union as being sacred and sacramental, in the sense that it reflects God’s love.

Victor said his perspective changed when his nephew, with whom he was quite close, came out. The priest is now public about his willingness to bless same-sex unions and added that, at the couples’ wedding, he was “a little angry and a little disappointed that we couldn’t do it in a church where I could have officiated.” Fr. Victor suggested many priests believe as he does but remain quiet out of fear.

Their wider families have been quite supportive, too. Only one person refused to attend their wedding. Victor’s dad, Lennie, summing up the families’ response:

” ‘If the church makes you choose between your family and your faith. . .I guess we voted for family.’ “

In a related note, Bishop Thomas Gumbleton, who is a former auxiliary in Detroit, recently offered a day of reflection with Fortunate Families. He, too, was changed by a family member’s coming out when his brother announced he was gay. Gumbleton told those gathered:

” ‘It’s clear the movement is there. . .but it takes a long time for the teaching to permeate the whole church, and people will fight it.’ “

Pope Francis is creating space for LGBT Catholics, their families, allies, and pastoral ministers to move the church closer to a church that is “home for all.” When church leaders make exclusionary and even homophobic or transphobic remarks, it can be helpful to remember local stories like this Detroit gay couple and their parish. Truly, it is in these spaces within the Church where that movement Bishop Gumbleton identified is happening, and it is in this movement that we must place our hope.