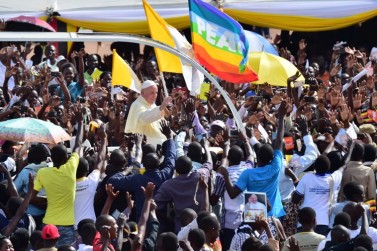 LGBT advocates are saying Pope Francis missed an opportunity to preach tolerance and save LGBT lives because he remained silent during his Apostolic Voyage to Kenya, Uganda, and the Central African Republic which ended just over a week ago.

“. . . I feel he missed an opportunity to be specific about his stand on the issue, by publicly discussing the continued persecution of LGBT people in Uganda. . .If he’s not done it publicly in Uganda, I don’t see him doing so anywhere else.”

Onziema added he had not had much hope for positive statements because the pontiff, in his estimation, is “wishy washy” on LGBT rights.

“Yes, I am disappointed. It would have been a very good gesture and the start of a conversation with the Catholic Church on accepting LGBTI Catholics in the Church.

“I would have told the pope that Ugandans love him so much, and so do LGBTI Ugandans, and we – all Ugandans – want the same things: to live with each other in peace. So, the churches that discriminate against us the most should preach tolerance and acceptance.”

“Pope Francis usually is much more courageous and direct in confronting controversial issues, especially when bishops have acted poorly, as the Ugandan bishops have done in regard to ignoring the human rights of LGBT people.”

Marianne Duddy-Burke, executive director of Dignity USA, said Pope Francis speaking out “would have made a huge difference globally.”

Mugisha, who is Catholic (and was featured in Bondings 2.0‘s first Advent reflection this year for his courageous witness), explained the situation in his country which is more than 40% Catholic. He told Al Jazeera:

“Church is a place for love, for refuge and for peace and support, but that support is not given to them. They feel they have been let down by the Church a lot. . .

“The Catholic Church in Uganda has been in alliance with all the other churches in condemning and discriminating against LGBTI persons. The language that preachers use and the anti-gay statements make people who are even in the closet feel discriminated against.”

Thes discrimination and violence, fueled by Catholic and U.S.-based Evangelical churches includes “hate crimes, arrest, blackmail and extortion, public humiliation” and being outed in the media. Additionally, in Uganda, a highly religious nation, lacking affiliation with a church can exclude one from society at large. Mugisha revealed discrimination he faces specifically in the Catholic Church, saying priests will preach against homosexuality if they know he is attending Mass.

But this high religiosity also means that Ugandans listen closely to Pope Francis’ words. If he had spoken out, they would have taken a message of tolerance towards LGBT people “seriously,” said Mugisha To not have spoken out “will go down in history,” he told Citizen.

LGBT advocates in Uganda and Kenya repeatedly sought words of tolerance from the pope. The Rainbow Catholic Network of Africa appealed to Francis for mercy and inclusion. People of faith worldwide had asked Pope Francis to condemn anti-LGBT laws through New Ways Ministry’s #PopeSpeakOut campaign. The pope’s decision not to respond, covered in more detail here, is troubling despite an otherwise remarkable papal visit.

Pope Francis’ silence is especially problematic because that same week Uganda’s Parliament passed the Non-Governmental Organizations Bill in the middle of the night.  Since the bill allows the government to dissolve community groups at will, critics fear it will be used to curtail LGBT advocacy, reported PinkNews.

Though Pope Francis missed an opportunity to save LGBT people’s lives and promote their dignity, some Catholic bishops are speaking out. Cardinal Gracias’ opposition to LGBT criminalization in India is quite notable, as he is the subcontinent’s only religious leader to preach tolerance. Maltese Bishop Mario Grech gave a positive interview in recent days, too.

Most hopeful are the many and varied good works of the People of God happening locally. Some make headlines, but most are quietly planted and lovingly cultivated in communities. Pope Francis should consider how he can help water these seeds during the Year of Mercy. It is always the right time to speak out for LGBT people’s lives and dignity.