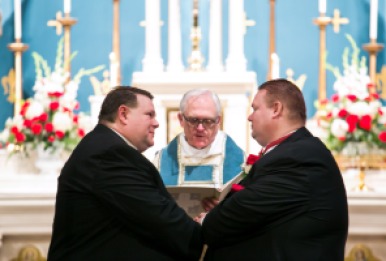 Sandor Demkovich (left) and Frank Hattula at their wedding ceremony in an Episcopal Church.

A second church worker in Chicago has claimed he was fired for being gay, according to a legal complaint filed against the archdiocese. This firing challenges the Pope Francis-like record of Archbishop Blase Cupich, but presents an opportunity for Cupich to respond well, and lead a new way of being church.

Sandor Demkovich claims he was terminated as St. Andrew the Apostle parish’s music director in 2014 after marrying his male partner, reported The Chicago Tribune. According to Demkovich’s lawyer, Kerry Lavelle, the pastor, Fr. Jacek Dada, was initially accepting of the relationship though mindful that any “union” opposed church teaching.

Four days after the wedding, described by husband Frank Hattula as a “very spiritual event. . .filled with love and music,” Dada’s thinking shifted and Demkovich was fired during a meeting with the pastor. The music director explained his reaction to the Chicago Sun-Times:

” ‘It’s hurts so deeply. . .I can’t tell you how difficult getting through Christmas and Lent and Easter this past year has been. It’s just been horrible. . .I love the church. I love the music. I love the spirituality.”

” ‘We once again see a pattern of acceptance and inclusion by the parish pastor, and the parish congregation in general, of an openly gay qualified employee suddenly reversed as soon as he enters into a legal marriage.’ “

Demkovich is now appealing to the Equal Employment Opportunity Commission (EEOC) and the Illinois Department of Human Rights, in the hopes of regaining his job even with the Archdiocese. The Tribune explained:

“Demkovich alleges in his complaint that the church’s pastor said his ‘union’ was against the teachings of the Catholic Church and also told a choir member that he thought Demkovich and his partner ‘were going to keep this quiet and not make it public.’ In addition, Demkovich said he was harassed about his weight, obesity and diabetic condition to the point that it created a ‘hostile and intimidating work environment.’ “

Another Chicago church worker, Colin Collette, who is also represented by Lavelle, has filed with the EEOC as well. Collette was fired in 2014 as Holy Family Church’s music director (in suburban Inverness) after seventeen years because he became engaged to a male partner. His discrimination filing with the EEOC will proceed to an administrative investigation because the Archdiocese of Chicago has refused mediation and is also refusing to comment on the matters. Collette previously met with former Chicago Cardinal Francis George and received a standing ovation during a parish town hall held to discuss his termination.

Demkovich joins more than 50 church workers who have lost their job since 2008 over LGBT issues, a tragic trend which Boston’s Cardinal Sean O’Malley “needs to be rectified.” You can access a full listing of these church workers here.

O’Malley is the only U.S. prelate to question the discrimination against LGBT church workers, but the two firings in Chicago provide an opportunity to Archbishop Cupich to practice the mercy and inclusion he preaches.

At the recent Synod on the Family, the archbishop spoke forcefully in favor of respecting people’s consciences, saying in part:

“The conscience is inviolable. And we have to respect that when they make decisions and I’ve always done that. . .We can’t just refer to doctrines as though they’re syllogisms that we deduce a conclusion to. . .There has to be that integration of a person’s circumstances, case by case in their life.”

Cupich’s record affirms that his actions often match these beliefs. While on CBS’ Face the Nation last year, he affirmed the need for same-sex couples and their families to be legally protected , and he called for a tempered response to the U.S. Supreme Court’s June 2015 decision to legalize marriage equality across the nation. Most recently, Cupich sought “new avenues and creativity” in the church’s pastoral care of non-traditional families.

Archbishop Cupich should weigh carefully his response to the firings. Admitting the injustice of these firings and apologizing is a first step, which would reveal a respect for the men’s consciences and the need for tempered responses now that marriage equality is the law. Seeking ways to welcome them back as church workers, if either so desired (Demkovich has expressed interest), would allow him to model new avenues of being church and pursuing healing in the parish communities so deeply wounded by discriminatory acts allows for Spirit-driven creativity drawn from all.

Archbishop Cupich’s vision for the church and his nuanced approach to controversial pastoral issues has been impressive and refreshing. Talk is good, but insufficient unless it translates into real change. Responding to the firings of Sandor Demkovich and Colin Collette are prime opportunities for Archbishop Cupich to lead with his actions, too.

For Bondings 2.0‘s full coverage of this story, and other LGBT-related church worker disputes, click the ‘Employment Issues‘ category to the right or here. You can click here to find a full listing of the more than 50 incidents since 2008 where church workers have lost their jobs over LGBT identity, same-sex marriages, or public support for equality.