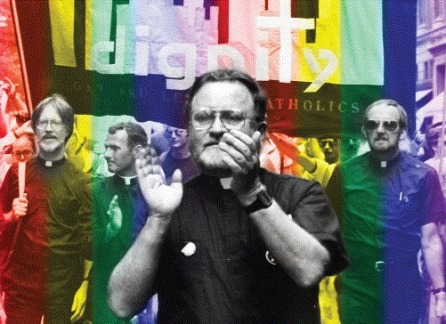 Rev. John J. McNeill‘s canonization may be years away, but as Catholics mark today’s Solemnity of All Saints, we celebrate certain he is among the saints in heaven. McNeill’s passing into new life comes in a fall where the church itself is gradually dying to prejudice and misunderstanding and passing into a more inclusive life.

Yet, busy though these last weeks have been, we must not forget a person the National Catholic Reporter (NCR) called the “patron saint of LGBT Catholics.” The following are reflections on McNeill’s passing with full obituaries linked at the bottom. Thomas Fox of NCR wrote:

“McNeill is widely revered among gay, lesbian, bisexual and transgender rights Catholics as well as others who looked to his scholarly writings to help them accept their own sexuality and defend themselves against what they view to be misguided church teachings. . .

“He did not mince words when speaking of the pain he had felt at the hands of his church. . .His radical and provocative views on sexuality were never successfully muzzled by church authorities. . .His pastoral approach toward healing the pain gay and lesbian Catholics were experiencing seemed boundless. . .He believed that individual conscience needs to be the final arbiter when deciding on sexual matters.”

” ‘I learned so much from his research and writing, but I learned even more from personal interactions with him by witnessing the passion and human concern he had for every LGBT person he encountered.’ “

New Ways Ministry’s Executive Director, Francis DeBernardo, said McNeill had a “rare mixture of both a great heart and a great mind” and continued:

” ‘It is not an overstatement to say that any of the pastoral, political, theological, and practical advances that LGBT Catholics have made in recent years could only have been brought about because of John’s ground-breaking work.’ “

DignityUSA’s statement called McNeill a “seminal figure” in that organization’s history, stating that he was:

“A powerful presence at nearly every Dignity convention and in many Dignity communities until recent years, McNeill was presented with DignityUSA’s Lifetime Achievement Award in 1997.”

Executive Director Marianne Duddy-Burke added that McNeill was “the first major prophet of the Catholic LGBT movement” who exhibited “groundbreaking bravery in daring to question official Church doctrine” that was “truly liberating to so many people.” You can read more testimonials from Dignity leadership here.

“He was without doubt a prophet of his time, one who challenged the Roman Catholic hierarchy and cultural homophobia through his steadfast affirmation and celebration of the goodness of the human body, relationships and sexuality.”

Theologian Mary Hunt, after wondering why neither Pope Francis, a Jesuit, nor the Jesuit weekly America made note of McNeill’s passing, wrote movingly in Religion Dispatches about a fellow theologian whose ministry was “legendary”:

“He always encouraged people to practice their faith insofar as their conscience allowed. For this, the institutional church scandalously silenced him. He accepted their sanctions for years until he could not longer reconcile his conscience with the cowardice of ecclesial officials.

“People were dying of AIDS and the Vatican, under the pen of Joseph Cardinal Ratzinger, later Pope Benedict XVI, was prattling on about the “intrinsic moral evil” of homosexual orientation. John had enough guts and good sense to stop colluding with such nonsense and got on with the ministry to which he was committed. The Society of Jesus eventually dismissed him. Many friends like myself noticed that while they may have taken the man out of the Jesuits, they never took the Jesuit out of the man. He maintained a deep faith and a critical consciousness to the end of his distinguished life.”

Jesuit Fr. James Martin tweeted that though he did not always agree McNeill he praised him as “a pioneer in ministering to the LGBT community. . .he was a kind and courageous man.”

Rev. Nancy Wilson, the Global Moderator of the Metropolitan Community Church, said it was not an accident that this former Jesuit died just as Pope Francis visited the U.S. Wilson, in a statement, spoke of McNeill’s marriage as a “profound witness [that] changed the church and the world.”

Brendan Fay, a Dignity member whose documentary Taking a Chance on God is about McNeill’s life, described him on Facebook as: “gay priest, prophetic witness, healer, warm friend, teacher, bearer of hope and tenderness.”

We can add to those identifiers saint, for if we believe today’s Gospel which says, “Blessed are they who are persecuted for the sake of righteousness, for theirs is the Kingdom of heaven,” we know certainly John McNeill has been welcomed into communion with God with the words, “Well done, my good and faithful servant.”

Fired Vatican Gay Priest Is Now Suspended; Calls on Pope to 'Leave Us in...Bishops at Synod on the Family React to Final Report, Speculate on Next Steps...
Scroll to top
%d bloggers like this: