Below is the next installment of Bondings 2.0’s reports from the Synod on Marriage and Family in Rome. New Ways Ministry’s Executive Director Francis DeBernardo will continue to send news and commentary from this meeting. Previous posts can be reached by clicking here.

As we come to the last day of the synod’s meetings,  all the observers here in Rome–and around the world–are waiting anxiously for the final synod report, which will be voted on today, paragraph by paragraph, by the 270 bishop participants.  Bishops have already seen the first draft of the document and discussed amendments to it.

Yesterday, we got a small peek into what the synod report might have in store for LGBT issues.  The three Belgian bishops attending the meeting held a press conference at the Belgian College in Rome, where they spoke about their synod experiences, as well as hinting at what might and might be in the final document. 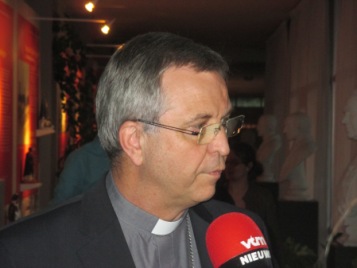 I was able to ask Bishop Johan Bonny of Antwerp a question about LGBT issues at the press conference:

“Bishop Bonny, in December 2014, you became perhaps the only Catholic bishop to call for a blessing for lesbian and gay couples in the Church. I’m wondering if after these three weeks, and the recognition that the synod has opted for marriage as only between a man and a woman, if you have been discouraged from that request , and if you haven’t been, then how do you think the Church can proceed to make that request a reality?”

The bishop answered candidly and pastorally:

“That is a question I will take up [how to go forward with his proposal] many times at home.  First of all, I didn’t really ask for the blessing.  That was what the headlines said. I asked for recognition of the valuesthat are present in that kind of relationship.  I hopefully will return to that request.

“It is true that in the synod this question was not really discussed.  It was at the end of the Instrumentum Laboris.  In most groups, very short time was left for the last chapter.  But that’s not the main reason.  The main reason is that in this synod, bishops did not really need or have the attitude to discuss the question.  It is true that most bishops of Western Europe and the Western world, we speak more or less the same language and feeling. But the readiness and the atmosphere was not there.

“The synod was not prepared to discuss the question. You need more input from human sciences, Biblical theology, moral theology, for discussing it in a good and complete way.   I think it is better that there was no paragraph or no extensive paragraph than a bad one. I think the feeling was  better leave the question open for further study than having a bad text. Something will be said on this issue [in the final document], but that is a point for next time.  I say it in a positive way. Let them leave it for the next time and a good time instead of discussing now in a bad way.
“In the small group I participated in, there was no way for bringing that forward.  As soon as it was mentioned, bad feelings were mentioned.  There was no way of discussing it. It was better to avoid it than push it and arriving that is something wrong.  More time will be needed.”

In a one-to-one conversation I had with Bonny after the press conference, he repeated his though:  “It is better that the synod said nothing on this issue than if they said something harmful.”  My sense as he was talking–and I stress that this is only my impression–is that he was saying that perhaps if the bishops did make a statement that it would have made the state of the discussion of LGBT issues much worse, set it back a bit, perhaps.

Bonny’s evaluation of the sense of the synod is probably colored by the fact that he participated in the French B small group, which was moderated by Cardinal Robert Sarah, who made probably the most homophobic remark of the synod.

In response to another question about whether lesbian and gay people might be disappointed by the final report, Bonny said:

“The synod is a moment.  We are in a process.  If you see what has happened since Pope Francis was elected, we see a process.    People do not expect us to resolve all questions in one moment.  They want the church to travel with them.  And that is the way we intend to go.”

Bishop Bonny was joined at the press conference by Cardinal Godfried Daneels, Archbishop Emeritus of Mechelen-Brussels,  and Bishop Lucas Van Looy of Ghent.
Van Looy said that what he learned at the synod is that tenderness will change the Church.  The Tablet quoted part of his statement:

“Life is stronger than theory about marriage and the family. One learned in this synod not to judge. We have accepted what people have said. We are an example of listening and accompanying. We have done this in the last three weeks.”

Van Looy summed up the lesson  of the synod rather poignantly:

“We learned in this synod not to judge.  Who are we to judge?”

Vatican's Cardinal Turkson: 'Homosexuals Should Not Be Criminali... Synod Final Report: Not Much Is Said, But A Lot Has Changed
%d bloggers like this:
Scroll to top