Below is the next installment of Bondings 2.0’s reports from the Synod on Marriage and Family in Rome. New Ways Ministry’s Executive Director Francis DeBernardo will continue to send news and commentary from this meeting. Previous posts can be reached by clicking here.

We’ve passed the midway point here at the synod in Rome, and I have to say that trying to navigate through all the information coming out of it has been like trying to drive in a hurricane!  So much happens here everyday, followed by so much analysis, that it is barely possible to report even a small slice of it.

While I am trying to write about LGBT and related issues, I must acknowledge that these are not the big news items, at the synod–at least not so far. The exception this week was the intervention made by Cardinal Robert Sarah of Guinea. His speech to the synod, by any standard, bordered on the extreme.  Religion News Service reported:

“. . . [I]n one particularly eye-opening speech to the assembly last week, a leading African cardinal blasted the ‘idolatry of Western freedom’ as equivalent to ‘Islamic fundamentalism’ and compared both to ‘apocalyptic beasts.’

“Cardinal Robert Sarah of Guinea, a top official in the Roman Curia, also said that divorce, abortion and same-sex marriage in the West, and Islamic fundamentalism in Africa and elsewhere, both had a ‘demonic origin’ that the synod had to combat.

” ‘What Nazi-fascism and communism were in the 20th century, Western homosexual and abortion ideologies and Islamic fanaticism are today,’ Sarah said.” 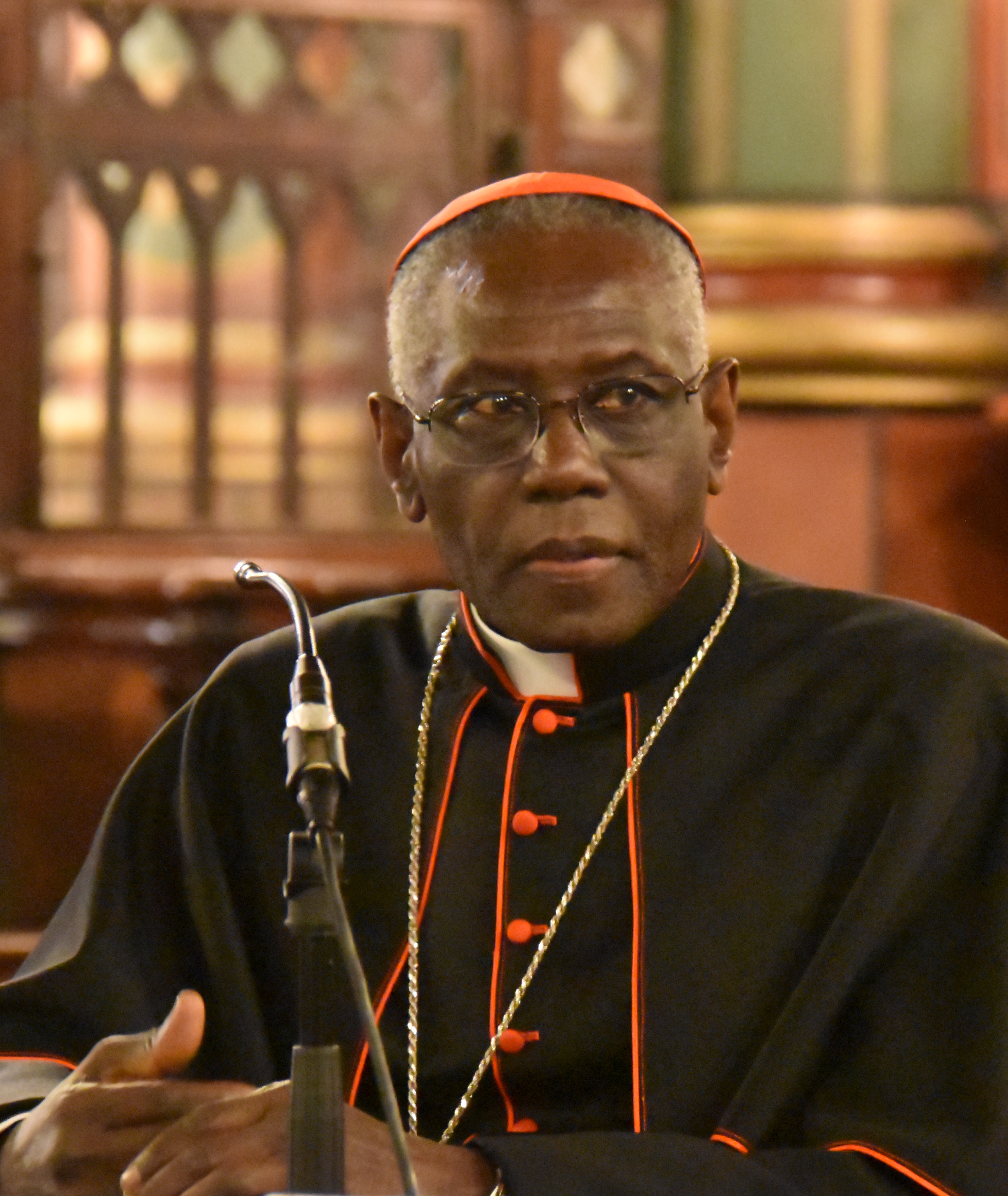 I mean, how does one rationally respond to such statements?  I fear that even reporting it gives it a a modicum of respectability which it clearly doesn’t deserve.   His statement is an example of how homophobia distorts a person’s thinking.  Fortunately, I have not heard that anyone else in the synod has voiced agreement with him, so I doubt his words have had much influence.  Having spoken them, though, Sarah provided ammunition (and, yes, the weaponry metaphor is correct here) to other homophobic people to physically and psychologically harm LGBT people.  His statements are irresponsible and un-Christian.

The much bigger news this week, though, was the leaked letter to Pope Francis organized by Australia’s Cardinal George Pell, and signed by about eight bishops (hard to say for sure because the original number of signatories was 13 but now four have disavowed signing it).  The letter criticized the new process of the synod which Pope Francis has instituted.  While Pell said it was not meant to be a public letter, it somehow found its way to an Italian daily newspaper.  If you are interested, more information can be found by clicking here.

And then there was the mysterious apology offered by Pope Francis at the general audience in St. Peter’s Square this week.   Pope Francis began his talk by saying, “I would like to ask forgiveness in the name of the church for the scandals that have happened in this last period both in Rome and at the Vatican. I ask forgiveness.” The Vatican Press Office declined to identify or speculate about what the pope’s reference was to.   Click here for more information on this topic.

Many guesses were made about what Pope Francis meant.  My guess, and it is one that I have not seen elsewhere, is that Francis may have been apologizing for Sarah’s speech, which was made in the synod last week, and which were made public two days before Francis’ audience.

The biggest part of my reluctance in posting information about these stories sooner is that it is hard for me to gauge how important these items are to the rest of the world outside of Rome.  Since I live in Washington, D.C., I am very aware that what is big news “inside the Beltway” is not always big news to the rest of the world.  When both of these stories broke this week, they both had the feel of being  “inside St. Peter’s Square” stories, but after the searching the web, I realized that they were being circulated more broadly than I originally perceived.

So I am learning a lesson here that is also germane to one of the main discussion topics of the synod.   At Wednesday’s press briefing, London’s Cardinal Vincent Nichols was discussing the proposed idea of whether to allow bishops more local decision-making in pastoral outreach on issues related to marriage and family.  Nichols offered the following analogy of how a broader perspective can help correct myopic vision.  The following is from The National Catholic Reporter’s story on the briefing.

“Nichols also praised the universality of the church in his remarks, saying that the local church has to ‘strive for is a kind of critical distance from its local setting, its particular culture.’

I totally agree.  But only if we also recognize that sometimes the universal Church can also learn something from the particular cultures in which it is embedded.  The checks and balances should go both ways.

Another part of the challenge of keeping up with everything is that there are so many channels of information dispersing news and documents, and it seems that new ones emerge every day.   For instance, while neither journalists nor the public have access to the synod hall to hear the discussions,  many bishops have made their presentations and other thoughts public in a variety of different ways.

Here are a few sources that I have found helpful. I offer these to those of you whose appetite for synod news just can’t seem to be sated.  Just click on the links below to get to the named source.

The Vatican Press Office is maintaining a blog about the synod, which includes links to press briefings’ summaries and interviews with bishops.  You can read it in any one of six languages, including English.

Vatican Radio publishes a report on the press briefings daily, as well as other stories about the synod.  Additionally, the video of the daily press briefings are available each day on the Vatican’s YouTube channel.

You can read the Vatican’s Daily Bulletin (available in five languages;  click “EN” in the upper right-hand corner of the Bulletin page for English), which contains links to all press releases of the particular day, some are synod-related and some are not.

Washington, D.C’s Cardinal Donald Wuerl made his synod intervention available on his blog.

Australian Archbishop Mark Coleridge is maintaining a blog about his synod experiences and reflections.

Chicago Archbishop Blase Cupich is offering video reflections about the synod on the archdiocese’s YouTube channel.

Crux posted a news story on various ways that bishops are using the web and social media to get their messages directly to people.

I’ve found the following news sources to be invaluable in interpreting the sometimes Byzantine language of the Vatican:

Salt and Light TV, a Canadian Catholic outfit, is offering expanded synod coverage on their website and also on their blog.

Dispatches, a blog of America magazine, has synod reports from Gerald O’Connell

For a British take on the synod, check out the blog reports by Christopher Lamb on The Tablet’s website.

Terence Weldon’s posts at Queering The Church always offer intelligent commentary on Catholic LGBT issues, and his posts about the synod are no exception.

I’ve previously mentioned, and it’s definitely worth repeating, that FutureChurch’s Debra Rose-Milavec has been blogging at SynodWatch, providing great reports and commentaries. Though other travel obligations have caused to be absent from Rome this week, she will be returning by the time the third and final week of the synod opens on October 18th.

So, while being here does have some advantages in terms of covering the news of the synod, I have to acknowledge that even if you are not present here,  the Internet has provided many ways to keep in touch with information that is being made public.

Have you found other internet sources of information about the synod that you find useful?  If so, please share your sources with other Bondings 2.0 readers by providing the web addresses for the sites you found in the “Comments” section of this post.