The news that Pope Francis met privately in Washington, DC with Kim Davis throws a wet blanket on the good will that the pontiff had garnered during his U.S. visit last week.  Davis is the Protestant Kentucky county clerk who defied a court order to issue licenses to lesbian and gay couples after she refused to do so, citing moral reason. Though some commentators are downplaying the significance of the meeting, the fact that it happened at all raises a red flag about where he stands on LGBT issues. The pope’s decision to meet Davis with  is a puzzling one for many reasons. 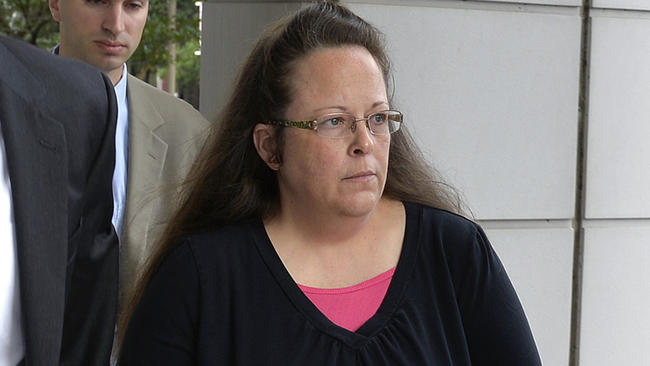 First of all, Pope Francis had steered clear of getting involved in any particular political situation while visiting the U.S.  Though he spoke twice to audiences on the topic of religious liberty, he carefully avoided mentioning any individual case or example.  Indeed, as was noted earlier this week, some of his comments on religious liberty were easily interpreted as supporting LGBT people.

Second, there had been numerous calls for the pope to meet with LGBT Catholics and families while in the U.S., and the Vatican ignored them all.  Indeed, many other Catholics supporting other social justice issues also requested a chance to speak with the pope.  What was special about Kim Davis’ case that the pope decided to meet only with her? Moreover,  why did he do so secretly? In his remarks during the airplane interview on his way back to Rome, Francis was asked about exactly the type of case that Davis represents, and he refused to comment on any specific case.

Third, and even stranger is the fact that few Catholic bishops or organizations here in the U.S. have publicly supported Kim Davis’ cause.   Only Bishop Joseph Strickland of Tyler, Texas, and Bishop Thomas Tobin of Providence, Rhode Island, are on the record suggesting that clerks who oppose marriage equality should refuse to issue licenses.

Fifth, in his remarks during the airplane interview on his way back to Rome, Francis was asked about exactly the type of case that Davis represents, and he refused to comment on any specific case.  Why did he not tell reporters then that he had met with her? After those remarks became public, New Ways Ministry had commented that the pope was incorrect in labeling the refusal to issue marriage licenses as conscientious objection.

Though LGBT and ally Catholics have welcomed Pope Francis’ affirming remarks,  many, including myself, have also remarked that he sometimes talks out of both sides of his mouth.  Moreover, while he is LGBT-positive in general ways, his remarks on specific moral and political issues are often at odds with his welcoming stance.   The time for vagueness, ambiguity, and secret meetings is over.   Pope Francis needs to state clearly where he stands in regard to the inclusion of LGBT people in the church and society.