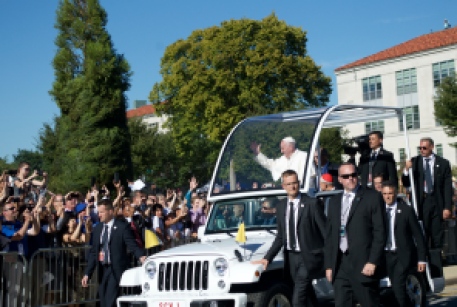 Pope Francis’ visit to the United States is well underway, as he finished up in Washington, D.C. and headed to the United Nations in New York City. Before he addresses the World Meeting of Families in Philadelphia this weekend, Bondings 2.0 is taking stock of what he has said thus far as it relates to LGBT issues.

Welcomed at the White House

Francis began with remarks at the White House, affirming in the first paragraph of his public statements that this visit was to be “days of encounter and dialogue” but also nodding to the fact that his visit revolves around the Eighth World Meeting of Families, which has been meeting in Philadelphia all week. However, the comment drawing many observers’ attention was the pope’s use of the phrase “unjust discrimination” in his address to President Obama and the crowd at the executive mansion:

“American Catholics are committed to building a society which is truly tolerant and inclusive, to safeguarding the rights of individuals and communities, and to rejecting every form of unjust discrimination.”

This term, found in the Catechism of the Catholic Church in its section on homosexuality, has a dubious history. Buzzfeed contacted Francis DeBernardo, executive director of New Way Ministry, who commented:

” ‘We haven’t heard that term in a long time — in the three years since Francis has been in — and it is disturbing to hear him resurrect it. I think the record shows that sometimes he speaks out of both sides of his mouth’ . . .

” ‘I would be fearful that right now the U.S. bishops think that just discrimination would be being able to discriminate against gay and lesbian people who choose to marry.’ “

In the same article, Marianne Duddy-Burke, executive director of DignityUSA said the phrase has “dangerous ramifications for LGBT people” and “sets off warning bells” because:

” ‘. . .it is support for a position many U.S. Catholic bishops have taken — which is against same-sex marriage, the right to fire married gay employees or transgender employees, the right to exclude LGBT people from adoption, and to deny LGBT people foster-care services.’ “

The Vatican, via spokesperson Fr. Federico Lombardi, is refusing to clarify what “unjust discrimination” would constitute or what the pope was referencing. Interestingly, an editorial from L’Osservatore Romano quoted Pope Francis as using the phrase “every form of discrimination,” not “unjust discrimination, which is included in the official text of his speech and how many major news organizations reported it.

Later on Wednesday, Pope Francis addressed a gathering of U.S. bishops at Washington’s Cathedral of St. Matthew the Apostle and gave, as is becoming customary when he holds episcopal meetings, a rather lengthy reflection. While not directly addressing LGBT issues, several statements challenged the often caustic and condemnatory tone used by U.S. bishops when addressing “culture war” issues.

Pope Francis spoke “as a brother among brothers,” emphasizing that bishops are foremost pastors concerned with caring for people. Noting bishops’ tendencies to be defensive, the pope said:

” ‘And yet we are promoters of the culture of encounter. . .Dialogue is our method, not as a shrewd strategy but out of fidelity to the One who never wears of visiting the marketplace, even at the eleventh hour, to propose his offer of love (Mt 20:1-16)’. . .

” ‘Harsh and divisive language does not befit the tongue of a pastor, it has no place in his heart; although it may momentarily seem to win the day, only the enduring allure of goodness and love remains truly convincing.’ “

Whether intentional or not, Pope Francis’ suggestion to use pastoral dialogue instead of harsh language could rebut the manner in which many U.S. church officials have dealt with LGBT issues. Michael Sean Winters of the National Catholic Reporter called the speech a “masterpiece” and wrote:

“The man [Francis] just radiates the joy that comes from trust in the Lord. . .I did not hear him blame secularism or anything else for what ails the Church. Quite the contrary. . .How many culture warriors in the U.S. can say the same? The pope challenged the culture warrior model today, and it did it with extraordinary gentleness, reminding me of the biblical injunction that we shall reap what we have sown.”

Yesterday, Pope Francis addressed a joint meeting of the U.S. Congress in a historic first for a pontiff.  It was one of the most anticipated events of his visit. His speech is winning broad praise across the political spectrum. He touched only briefly on marriage and family issues towards the end of his talk:

“How essential the family has been to the building of this country! And how worthy it remains of our support and encouragement! Yet I cannot hide my concern for the family, which is threatened, perhaps as never before, from within and without. Fundamental relationships are being called into question, as is the very basis of marriage and the family. I can only reiterate the importance and, above all, the richness and the beauty of family life.”

The pope then pivoted to speak about the struggles young people face, described as “the most vulnerable” of all people,  and he acknowledged the competing pressures they face today.

Were Francis’ remarks on threats to the family an allusion to marriage equality?  It’s hard to say.  Families do, in fact, face enormous pressures today from many quarters:  economic, psychological, cultural, and political.  Is his language choice a way of not wanting to be offensive, or is it a way to use coded language to get his message across?

Also worth noting is Pope Francis’ citation of two U.S. Catholics who faced criticism, even censure, for their views: Dorothy Day tried to integrate socialist and anarchist ideas into a church which was fiercely anti-leftist; Thomas Merton was silenced by religious superiors for his prophetic writings on peace and eastern spirituality. Both figures are now being rehabilitated in the church, and McElwee wrote in the National Catholic Reporter (NCR) that “both citations are certainly extraordinary.”  NCR Publisher Thomas Fox provided brief profiles on these saintly models, which you can find here.

Lest I seem naive, I acknowledge Pope Francis still holds to views which fail to acknowledge the goodness of LGBT people and their relationships. He is opposed to marriage equality and we cannot obfuscate these realities even when his words about dialogue and encounter are good and true. LGBT people and their families still face exclusion and spiritual and psychological violence inflicted by church officials in many parts of the world.

Pope Francis also glaringly avoids paying any attention specifically to women, whose oppression within the church is tied to similar views on gender and sexuality so often employed against LGBT people. New York Magazine rightly wrote, “Pope Francis’ Revolution Has Left Out Women.”

I also know that Pope Francis’ new way of being church will be tenuous at first and, in some places, won’t take root. Also noteworthy is that, despite repeated requests, Francis has chosen so far to not intentionally encounter LGBT Catholics during his U.S. visit.

What remains an open question is how Pope Francis will approach LGBT issues when he directly speaks about marriage and family life this weekend at the World Meeting of Families in Philadelphia. If only he would actually act on his reported desire to meet with gay and lesbian people, perhaps his insights would be more grounded in reality. If Francis’ remarks at the World Meeting of Families are negative about LGBT people, that would be a major challenge to his reputation as a more merciful and inclusive pontiff.

Stay tuned to Bondings 2.0 through the weekend (and in the weeks to come for the Synod on the Family) for ongoing Catholic LGBT news and analysis. To receive regular updates, subscribe to the blog (for free) by typing your email address in the “Follow” box in the upper right-hand corner of this page, and then click the “Follow” button.

Reflecting on the Life and Ministry of John McNeill, Gay Theology PioneerAt Philly's World Meeting of Families: Not Much Time Given to Homosexuality,...
Scroll to top
Loading Comments...
%d bloggers like this: