An important location update about the eviction from a Philadelphia Catholic parish of New Ways Ministry’s gender identity workshop and Equally Blessed’s World Meeting of Families programs, which we reported on last week, is included in the middle of this blog post.

News of the evictions of New Ways Ministry’s gender identity workshop and Equally Blessed’s World Meeting of Families programs being evicted from a Philadelphia Catholic parish spread around the country last week. (You can see a selection of links to various news outlets reporting on the issue at the end of this post.) During all the conversations that I had about the evictions with various people, three thoughts came to mind that put these actions into various ironic perspectives. 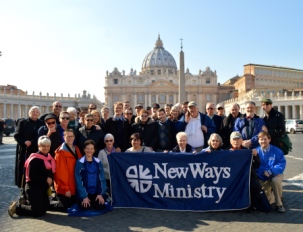 The first occurred when I was sending a reporter a photograph of New Ways Ministry that she saw on our Facebook page and wanted to use.  It was a photo of New Ways Ministry pilgrims proudly holding our organization’s banner in front of St. Peter’s Basilica in Vatican City (see photo at right).  The occasion was Ash Wednesday, 2015, the day that our pilgrimage group was seated in VIP seats we received from the Vatican for the papal audience in St. Peter’s Square.

As I looked at the photograph, a thought dawned on me:  “The Vatican gave us VIP seats for a papal audience and yet now we are being evicted from a Catholic parish in Philadelphia. Something is wrong here.”

Was the Vatican’s example of welcome not enough for the Archdiocese of Philadelphia to follow?

The second irony came when I was talking to a reporter and explaining that Sister Jeannine Gramick, New Ways Ministry’s co-founder, was born and raised in Philadelphia, and that it was in that city where here ministry to the LGBT community began back in 1971, over 44 years ago.

I thought: “How sad that our church has changed so radically in the past 44 years!  How sad that someone with such strong roots in the Catholic world of this city can now have her ministry so unceremoniously evicted.”

A third irony is that these events, which had not been well-known beforehand, have now received national attention and very strong local attention in the Philadelphia area.  More people now know about these programs than we would have been able to reach with our limited advertising means.  God certainly does work in mysterious ways.

In a column in The National Catholic Reporter,  Kelly Stewart commented about the idea behind this third irony.  She stated:

“[T]here is a danger in talking about the ‘opportunities’ afforded by exclusion. I do not mean to minimize the seriousness of institutional homophobia or to suggest that progressive Catholics search for ‘silver linings’ in the grim picture that is the WMOF 2015 event agenda. My point is that, even when they have been barred from participation in the meeting or forced to relocate from Catholic to Protestant churches, LGBT Catholic groups have still helped shape conversations about family, sexuality, and gender identity in valuable ways.”

“To the extent that the WMOF [World Meeting of Families] is a forum for discussing the lives of Catholic families, LGBT families should, of course, be able to participate fully. But to the extent that the WMOF is a rally to defend the patriarchal ideal of family against the specters of feminism and homosexuality, LGBT Catholics might want to consider embracing their outsider status. . . .

“The WMOF is . . .dedicated to defending the privileged status of a narrow, patriarchal ideal of family against the outside ‘threats’ of feminist and LGBT theology and politics. LGBT Catholics and the people who care about them should consider embracing their position as outsiders — and the possibilities that position holds for building more just, respectful, and equitable models of relationships.” 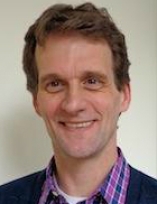 In a blog post on Believe Out Loud, James Rowe takes a different perspective on the World Meeting of Families and the recent eviction of LGBT groups from a Catholic parish.  He stated:

“And when we arrive in Philly, we will continue to place value on the entire Catholic family, whether Archbishop Chaput wishes to recognize us as his Catholic brothers and sisters or not. 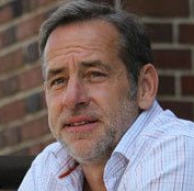 Jim Smith, Associate Director of DignityUSA, wrote a blog post for the National Catholic Reporter commented on the value of having LGBT families at the WMF.  Writing as a representative of the Equally Blessed coalition, Smith compared these families to the woman in Scripture (Luke 7:36-50) who washes Jesus’ feet with her tears and hair, while religious leaders look on and condemn her:

“In just a few weeks, throngs of Catholics will enter the Vatican-sponsored World Meeting of Families in Philadelphia. These people will bring the same tears of love and faith brought to Jesus so many years ago. Fourteen families from our Equally Blessed coalition will be among them: parents of transgender or gay children who have been challenged over thousands of days and nights to love those kids unconditionally, who know viscerally what it means, in the words of the prophet Micah, ‘to act justly, love tenderly and walk humbly’ in their parental roles; gay couples with children who live by the promise to raise those children ‘according to the love of Christ’; transgender, intersex and gay persons themselves who are coming through a fire of marginalized existence into the freedom of God’s beloved, finally knowing their ;sin; is not who they are and whom they love, but what chases us all — greed, fear, hate, hubris.”

One thing is for sure:  the World Meeting of Families is going to be an important moment in U.S. Catholic history and in the discussion of LGBT issues in the Catholic Church.

You can read more information and register for New Ways Ministry’s workshop, “Transforming Love:  Gender Identity from Catholic Perspectives,”  by clicking here and downloading a PDF of the brochure.

Chicago Archbishop: 'We Must Be Open to New Avenues & Creativity When... Dismissed Lesbian Educator Refuses Catholic School's Monetary Offer
%d bloggers like this:
Scroll to top