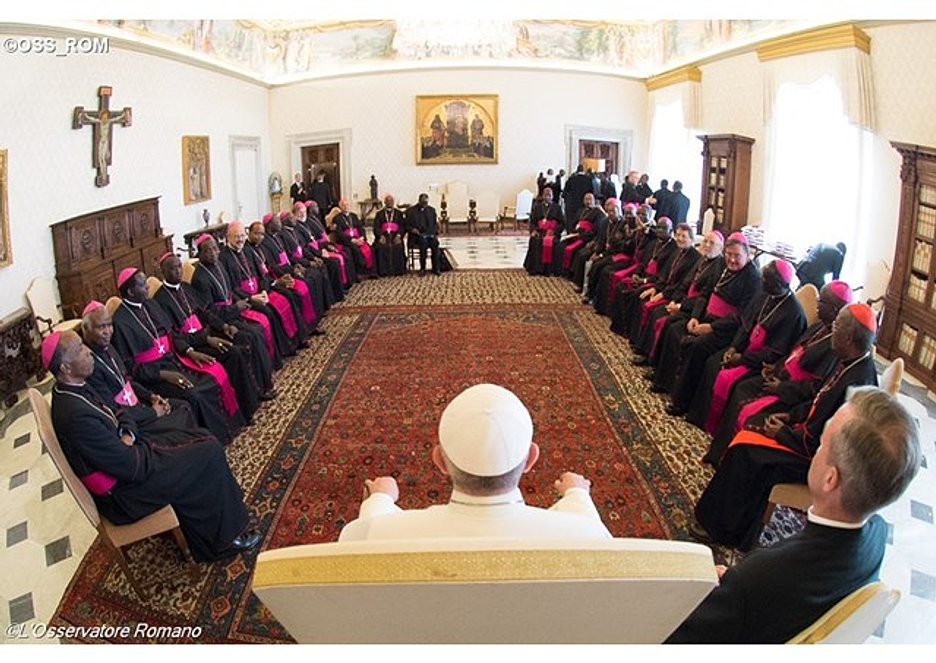 Kenya’s bishops during their ad limina visit with Pope Francis

Keep silent on LGBT rights. This is the message Kenyan Catholic bishops have sent to U.S. President Barack Obama in the days before his planned July visit, a belief shared by their continental colleagues, and a belief increasingly at odds with Pope Francis’ vision for the church.

Bishop Philip Anyolo of Homa Bay, the Kenya Conference of Catholic Bishops’ president, said the bishops “are not going to allow same-sex marriage” and debate should end.

Presenting a different reason for not focusing on the marriage topic was Fr. Russell Pollitt, SJ, director of the Jesuit Institute in South Africa, told the Catholic Sentinel:

Such concerns about the topic have arisen largely due to the Supreme Court’s June decision to enact equal marriage rights nationwide, celebrated by President Obama by lighting up the White House in rainbow colors on the night of the ruling.

Bishops in Nigeria weighed in on the Court’s marriage decision, which allegedly threatens Africa because of Western cultures massive influence on nations there. They called marriage equality’s global expansion:

“a sad, unjust and lamentable situation based largely upon a distorted perception of natural law, the will of God and human nature.”

Catholic Bishops’ Conference of Nigeria president, Archbishop Ignatius Kaigama, added that decriminalizing homosexuality leads to the “festering of the homosexual culture/sub-culture” as he claims is happening in Mozambique, reported Leadership. Nigerian legislators recently passed a law, supported by 87% of citizens according to GLAAD, that sentences couples to fourteen years in prison for marrying.

This resistance to Obama’s visit and the advancement of LGBT equality is a stark reminder post-Obergefell that much work remains in ensuring justice for all people. The Guardian’s Observer column writes:

“[The bishops’ warnings] serve as a chilling reminder that, globally, the war for LGBTI rights is being fought on two fronts. . .across much of the Middle East, Africa and Russia, the fight takes a crueller [sic] form: for the right not to suffer criminal punishment for exercising the right to love whomever one wishes.

“Across most of Africa, same-sex relationships remain illegal and public attitudes towards homosexuality are the most negative in the world.”

Indeed, as some countries advance, others regress. At least 34 African nations criminalize homosexuality and in places like Uganda, there has been much debate over enhancing such laws to even include the death penalty.

African bishops should better inform themselves about the realities of LGBT existence in their communities before speaking any further on the topic. While nations there face issues related to poverty, climate change, and other papal themes, they must also address as entirely inconsistent with the Gospel the violence and discrimination instigated because of victims’ sexual orientation or gender identity. All of these are “pressing” issues.

Endorsing same-gender marriage may be too much to ask, but preserving the life and the dignity of all people, especially those most marginalized, must become a core part of these bishops’ response to LGBT communities.

Kenya’s bishops were not alone in telling Obama to stay silent on LGBT rights, having been joined by other religious and political leaders. But Catholic bishops in Africa should do better. They could start by looking to Pope Francis in moderating their opposition and striking a different, indeed prophetic tone of inclusion, mercy, dialogue, encounter, and welcome instead.

Now's the Time to Reflect on "What Makes a Family?"Church 'Fully Supportive' of Trans People Who Transition, Says Top...
Scroll to top
%d bloggers like this: