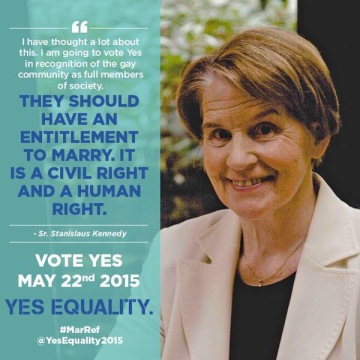 In under ten days, Irish voters will decide on approving marriage equality in one of the world’s most historically Catholic nations. If approved, this will be the first popular vote to legalize same-gender marriages in the world — but what is also remarkable about Ireland’s story, regardless of the outcome, is how many Catholics are publicly endorsing LGBT rights.

Religious Sister of Charity Sr. Stanislaus Kennedy announced she will be voting “Yes” for marriage equality. Speaking at an unrelated conference on austerity policies, Kennedy said of the vote:

” ‘I have thought a lot about this…I am going to vote Yes in recognition of the gay community as full members of society. They should have an entitlement to marry. It is a civil right and a human right’…

Sr. Kennedy works closely with those in Ireland experiencing homelessness, reports The Irish Times, and spoke against austerity measures because of the devastating impact they actually have had on families and will continue to have for years to come. 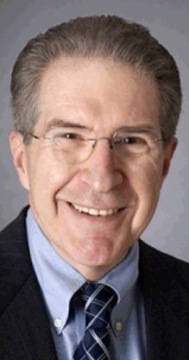 Top theologian Fr. Gabriel Daly also urged Catholics to vote “Yes,” in an article published by Doctrine and Life, a publication of the Dominicans. Daly, a former theology professor at several universities, said the matter is “an issue for the State, not for the church.” He continued, as reported in The Irish Times:

” ‘Marriage as a sacrament is the proper concern of the church. If the Yes vote succeeds in Ireland, it will be for the church to decide whether to co-operate or not…[I am] unimpressed by the claim that allowing gay men and lesbian women to marry members of their own sex necessarily has an effect on the Christian idea of marriage…Christians are perfectly free to carry on without any threat to their customary understanding of marriage.’ “

Fr. Daly said Catholics could vote for marriage equality “with good conscience,” but did add that adoption of children by same-gender parents is a separate issue.

These endorsement are only the latest in a series of Catholic voices over the last year. 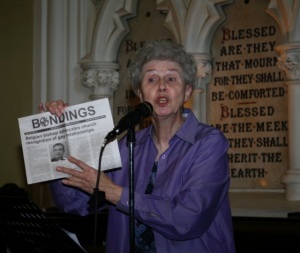 Sr. Jeannine Gramick, co-founder of New Ways Ministry, spoke in Ireland about supporting marriage equality several weeks ago saying “You can be Catholic and support civil marriage marriage for lesbian and gay people.“

Former Irish president Mary McAleese, an outspoken critic of the church’s anti-LGBT policies and mother of a gay son, also promised to vote “Yes” for the good of Ireland’s children. Equality campaigners are appealing to Irish voters’ Catholic roots by emphasizing the good this will do for their loved ones, asking them to bring your family with you to the voting booth on May 22.

Fr. Martin Dolan of Dublin came out to parishioners during Mass in January, saying “I’m gay myself” as he called upon the church community to support LGBT rights. He was widely supported by his parish, which applauded him, while facing no public consequences from the archbishop as many feared he would.

Augustinian Fr. Iggy O’Donovan wrote a pro-marriage equality article, saying “respect for the freedom of others who differ from us is part and parcel of the faith we profess” and he knows more priests will vote “Yes” than many believe. Meanwhile, Irish parishioners have walked out of a Mass when the pastor preached an anti-gay homily. 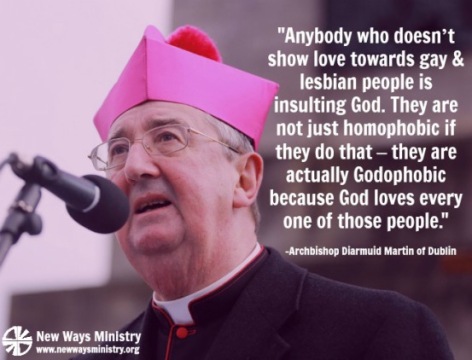 Ireland’s bishops have been less friendly, threatening at one point to stop performing civil marriages altogether if the referendum is approved. However, in a rare display of humility, Dublin’s Archbishop Diarmuid Martin admitted he is no expert on family life today. He also called anti-equality activists’ language “obnoxious,” said an “ethics of equality” was needed in the debate over LGBT rights, and, in the rarest of moves, joined Archbishop Eamon Martin of Armagh in publicly critiquing a fellow bishop who compared homosexuality to Down’s Syndrome.

New polling reported by Buzzfeed shows 78% of voters planning to vote “Yes” on May 22, but pro-equality campaigners are redoubling their efforts over fears support could drop in the final weeks due to confusion being sown by anti-LGBT activists. Regardless of the outcome, this movement in Ireland is revealing the best of Catholicism when it comes to LGBT justice and shows a way to dialogue publicly about divergent views while upholding the dignity of sexual and gender diverse persons.