Ireland’s upcoming referendum on marriage equality has evoked the expected opposition from the Catholic hierarchy in that nation, sometimes approaching an extremist tone, such as publicly considering that Catholic priests would not be allowed to perform any wedding ceremony–heterosexual or homosexual–if the electorate approves legal marriage for lesbian and gay couples.

Yet, recently, the archbishop of Dublin has offered a more reconciliatory tone.  While he still opposes the marriage equality law, Archbishop Diarmuid Martin has also called for “an ethic of equality” which would include legal protections for gay and lesbian committed couples.

London’s Tablet reported on the archbishop’s comments, made at All Hallows’ College, Dublin, during an address to diocesan communications specialists. You can read the entire text of his talk on the Archdiocese of Dublin website. I will excerpt some of the main points in this blog post.

The main point of Martin’s talk is to defend the issue of complementarity as essential to marriage and social and human stability.  For most of his talk, he explains his reasons for this defense.  He also argues for the importance of theological input into social and political debates.  If one were to read only this section of the talk, one might think that this was his only point, but towards the end of his talk, his subject he considers the situation of lesbian and gay people.

After discussing Pope Francis’ example of openness to lesbian and gay issues, he examines the idea of equality:

“An ethics of equality does not require uniformity. There can be an ethic of equality which is an ethic of recognising and respecting difference. A pluralist society can be creative in finding ways in which people of same-sex orientation have their rights and their loving and caring relationships recognised and cherished in a culture of difference, while respecting the uniqueness of the male-female relationship.”

Martin also critiqued people who cite Pope Francis in a positive way when they discuss Catholic support for marriage equality, saying that the pontiff has clearly expressed his defense of heterosexual marriage and complementarity. Of these Catholics, Martin said:

“I find it interesting that many of those supporting the yes campaign object to the use of religious language, but they are not shy in quoting Pope Francis in support of their arguments, although I feel that their knowledge of Pope Francis’ repertoire is somewhat restricted.”

He presented the pontiff’s view of same-gender marriage and LGBT people, noting that neither conservatives nor progressives are completely happy with the nuanced position:

“In the debates around same-sex marriage in Argentina, Pope Francis was unequivocal in his judgment about its non-admissibility, yet he consistently told people not to judge any individual. Many find that a position of that kind is untenable: certain things, they will say, are simply wrong and to be condemned and there is no way in which we can countenance any response except repentance and change of life style. Others will say that the only way in which the Church can show mercy is by changing its teaching. Pope Francis espouses neither of these positions in isolation.” 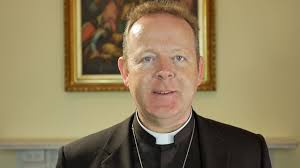 More important than the content about same-gender relationships, however, is the Dublin archbishop’s discussion of traditional hierarchical discourse about marriage equality. In the same week that Archbishop Eamon Martin of Armagh, the Primate of Ireland warned that religious freedom would be endangered by passage of marriage equality, Archbishop Diarmuid Martin took a more reconciliatory approach.

Diarmuid Martin, who in the past has acknowledged that church leaders and others have too often spoken negatively to and about LGBT people, admitted that he may not been as credible by some:

“I know that the harshness with which the Irish Church treated gay and lesbian people in the past – and in some cases still today – may make it hard for LGBT people to accept that I am sincere in what I am proposing.”

Noting that hierarchical language has often been “insensitive and overly judgemental,” Martin advised:

“The Church has to learn to voice its criticism clearly and without fear, but it must always do so in language which respects her Master.”

He recognized that the harsh language has been one of the biggest ways that bishops have failed in getting across their view of marriage:

“The problem in many ways is that the Church has often in the past presented its message poorly. What is a message of love was presented in language that was harsh. What was rational argument was presented as a dogma which all should accept. The truth about Jesus Christ can only be proclaimed in love.”

Martin has made the case for a more civil debate about LGBT people before and has called on church leaders to be more courteous and respectful in their discussions.

Ireland’s referendum will be held on May 22nd.

Irish Times: “Churchgoers give their views on marriage referendum”

The Independent: “Voting No to same-sex marriage is not homophobic, say bishops”

Irish Times: “Interfering with definition of marriage not a ‘trivial matter’ “