As New Ways Ministry’s pilgrims to Italy were flying across the Atlantic a few weeks ago, a story broke about Pope Francis and gender theory which, due to our being on the road (or, more accurately, in the air), did not quite get our attention.  The substance of the story was that the pope, in an interview published in a a new Italian book, likened gender theory to nuclear arms.  In The National Catholic Reporter, Joshua McElwee reported:

“Gender theory is a broad term for an academic school of thought that considers how people learn to identify themselves sexually and how they may become typed into certain roles based on societal expectations.

“Asked in the book about how important it is for Christians to recover a sense of safeguarding of creation and sustainable growth, the pope first speaks of the duty of all people to respect and care for the environment.

But he then says that every historical period has ‘Herods’ that ‘destroy, that plot designs of death, that disfigure the face of man and woman, destroying creation.’

” ‘Let’s think of the nuclear arms, of the possibility to annihilate in a few instants a very high number of human beings,’ he continues. ‘Let’s think also of genetic manipulation, of the manipulation of life, or of the gender theory, that does not recognize the order of creation.’

” ‘With this attitude, man commits a new sin, that against God the Creator,’ the pope says. ‘The true custody of creation does not have anything to do with the ideologies that consider man like an accident, like a problem to eliminate.’ “ 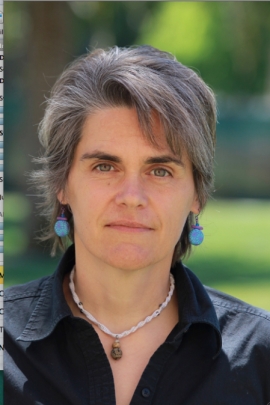 Part of the reason that this story slipped our attention was that there was very little commentary in the Catholic press about this interview.  One great exception has been Professor Lisa Fullam, of the Jesuit School of Theology, California, who examined the pope’s misconceptions about gender in a a blog post she wrote for DotCommonweal.

Fullam’s post is a great introduction to the contemporary understanding of gender from both scientific and social scientific perspectives.  She begins by offering comparative definitions of some key words, which are sometimes wrongly used interchangeably:  sex, gender, gender identity, gender expression, transgender, and queer.

She then examines some of Pope Francis’ (and Benedict’s and John Paul II’s, too) misconceptions about these terms.  For instance, she notes the lack of historicity in their definitions of masculine and feminine:

“That the definition of what counts as appropriate to women varies between and within cultures and across time is not accounted for in this view. Oddly, John Paul cites fierce transvestite warrior Joan of Arc (who was killed as a relapsed heretic for wearing men’s clothing, and can certainly, if anachronistically, be thought of as queer,) as a model of the feminine genius, thus calling into question the descriptive (and certainly the normative) value of many, if not most, of the ‘feminine’ traits he inferred.”

Fullam examines the social construction of gender, and also helps to dispel some myths which have formed the basis of some of our culture’s most foundational ideas about gender:

“Isn’t human nature fundamentally a duality of male and female? This can only be upheld by ignoring the existence of millions of human beings whose sex and/or gender identity do not fit the ‘rule’ of male AND masculine (according to which illusory single set of standards for masculinity?) or female AND feminine, (according to other illusory standards of such.) The spectrum of gender can be seen every time a woman relishes some more ‘masculine’ endeavor–like, say leading a French army against the British, like Joan of Arc. It can also be seen when men embrace more ‘feminine’ aspects of their character, yet remain ‘masculine’ in their gender identity. Anyone paying attention to the numerous ways people describe and express their masculinty and feminity would have to recognize that to assert a strict duality would be a facile caricature of humankind. I can only hope that Francis’ meeting with a trans man late last month will lead him to change his mind and heart. “

She concludes with a call for Christians to be more open-minded about gender:

Recognizing the degree to which social conventions define and delimit gender expression, I’d suggest that we leave a lot of room for people to speak to what it means to them to be men or women, or other, and not to force a lovely array of human be-ing into a false duality which fails to adequately reflect biology, much less the richer experience of human life in its totality. That has to do with gender roles, but also gender identity. And aren’t Christians especially called to uphold the human dignity of all children of God, male and female, masculine and feminine, transgender and cisgender alike? That attitude doesn’t ‘destroy’ nature, as Pope Francis fears, but rather recognizes the beautiful panoply of humankind that God has created.”

I’ve only given a brief taste of Fullam’s arguments.  If you are at all interested in the topic of gender, I recommend that you read her post in its entirety by clicking here.    If you like Fullam’s work, you may want to read an article that she wrote last year on “Civil Same-Sex Marriage: A Catholic Affirmation.”

Pope Francis’ comments on gender reveal that, while he has shown a refreshing openness to LGBT issues, he–and most likely, many others in the Catholic hierarchy–need a better education on the questions of gender which the rest of the world has been engaged in for decades now.  Perhaps such an education would not only help his approach to LGBT issues, but, equally important, on issues concerning women, for which he has a famous and dangerous blind spot.

On Being Able to Say "Here I Am!" Irish Arguments About Marriage Equality Go From the Ridiculous to the Subli...
Loading Comments...
%d bloggers like this:
Scroll to top