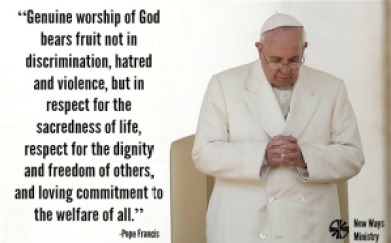 Today is Religious Freedom Day, a time set aside to honor one of the United States’  most cherished value: the right to worship God as one sees fit.   January 16th was selected for this commemoration because it it is the anniversary of the Virginia General Assembly’s adoption of the Virginia Statute for Religious Freedom in 1786, which became the basis for the U.S. Constitution’s freedom of religion clause in the first amendment.

For Catholics who support LGBT equality, religious freedom is an important issue because it is often used by Church leaders to oppose marriage equality and other laws that would require that LGBT people be treated as everyone else.  Conservative church leaders use religious freedom as a way to try to shield themselves from being required to comply with laws that they say their faith says they cannot obey.

I am a strong supporter of religious freedom.  I believe government should not force churches to act against their principles.  I believe that individuals should be able to live out their faith as they see fit.  However, I don’t believe that this freedom should be allowed to harm other people in the wider society, or worse, to deny others the opportunity to freely practice their faith. There is also a grave danger that the misuse of religious freedom can do serious harm to the concept itself.

For example, in a New York Times column, Frank Bruni points out that religious freedom is currently being used as an excuse to discriminate against LGBT people–the same way that it has been used against racial minorities:

“As these lamentations about religious liberty get tossed around, it’s worth remembering that racists have used the same argument to try to perpetuate segregation. [A.C.L.U. lawyer James] Esseks noted that even after the Civil Rights Act, the owner of the Piggie Park restaurant chain in South Carolina maintained that he could refuse to serve black people because his religion forbade the mixing of races. The courts were unimpressed.”

Yet, last year’s Supreme Court decision in the Hobby Lobby case paved the way for non-religious institutions like the Piggie Park restaurant chain to claim a religious exemption if those who run the institution have deeply held religious beliefs.

Bruni points out what is wrong with that kind of thinking:

“. . . [I]n a country that’s not supposed to promote any one religion over others, we do precisely that.

“Would we be content to let a Muslim store owner who believes that a woman should always cover her hair refuse service to women who do not? Or a Mormon hairdresser who spurns coffee to turn away clients who saunter in with frappuccinos?

“I doubt it. So why should a merchant whose version of Christianity condemns homosexuality get to exile gays and lesbians?

“Baking a cake, arranging roses, running an inn: These aren’t religious acts, certainly not if the establishments aren’t religious enclaves and are doing business with (and even dependent on) the general public.

“Their owners are routinely interacting with customers who behave in ways they deem sinful. They don’t get to single out one group of supposed sinners. If they’re allowed to, who’s to say they’ll stop at that group?”

While the expansion of religious freedom to non-religious institutions and activities is one danger, another similar danger is the expansion of the “ministerial exception.”  While this provision allows churches the freedom for clergy to be exempted from certain laws, there has been a movement to expand the idea of who is “ministerial.”  One only has to think of the tragic case of a gay food service director denied employment at a Catholic school because he was married to a man to see the problem with this type of expansion.

A main problem with the way that conservatives are playing the concept of religious freedom is not only the damage it can do to LGBT people and other minorities, but that those who truly face persecution because of religious belief are overlooked.  Religion News Service recently described  a report by an organization called Open Doors USA which monitors persecution of Christians around the world.  They cited 50 nations around the globe which are categorized into places of “Extreme Persecution,” “Severe Persecution,” “Moderate Persecution,” “Sparse Persecution.”  The United States is not even on the list.  No European nation is either.  Or any Latin American country.  In short, the places on the globe where marriage equality has been established do not even register on the Christian persecution scale.

Bruni illustrated how claims to Christian persecution here in the U.S. are deceptive and false:

“Christian fundamentalists in this country are practiced at claiming marginalization and oppression. ‘They’re always saying they’re kept out of the public square, and that’s baloney,’ said Marci Hamilton, a constitutional law expert and the author of  ‘God vs. the Gavel.’ ‘They’re all over the public square.’

“They and their churches inject themselves into political debates while enjoying tax-exempt status. They get public support in questionable circumstances. After a student Christian magazine insisted on its right to funds from the University of Virginia, the Supreme Court decided in 1995 that if a nonreligious publication got financial help from a public school, so must a religious publication, even if it’s proselytizing.”

Pope Francis, in his recent visit to Sri Lanka, made an impassioned call for religious freedom during one of his homilies.  The National Catholic Reporter quoted him:

“Religious freedom is a fundamental human right. Each individual must be free, alone or in association with others, to seek the truth, and to openly express his or her religious convictions, free from intimidation and external compulsion.”

Francis continued on the theme with a message that I think sums up my own views of religious freedom, and which challenges those who try to use religious freedom as a weapon to discriminate:

“Genuine worship of God bears fruit not in discrimination, hatred and violence, but in respect for the sacredness of life, respect for the dignity and freedom of others, and loving commitment to the welfare of all.”

New Ways Ministry is a member of the Coalition for Liberty and Justice, a group of religious, political, and legal organizations which work together to make sure that religious freedom is enacted in a way which honors all people.