A priest in Ireland recently came out as gay, telling Catholics to vote for civil marriage equality in Ireland’s upcoming referendum on the issue.

“Calling on his Dublin city congregation to support same sex marriage in the upcoming Irish referendum, set for the end May, Dolan said ‘I’m gay myself.’ “

Parishioners applauded him and said they were “very proud” of Dolan. Congregant Liz O’Connor told the Irish Sun that the priest consistently witnesses for the rights of all people, even speaking up for victims of clergy abuse during the Irish church’s ongoing scandals. She continued:

” ‘There’s not many of them (priests) that would come out because they’re afraid of the bishops and that, but Martin is his own man. He is a man of real conviction and he doesn’t back down…He is right to advocate gay rights. The Church should back the priest.’

” ‘He should not be condemned by the hierarchy of the Church; he should be supported.’ “

The Irish bishops have vocally opposed equal marriage rights, yet the Archdiocese of Dublin is refusing to comment on Dolan. However, The Sun quotes one church official as affirming the priest’s remarks:

” ‘It was very brave. He said he was gay. That was it…no bones about it…He was just doing his service, it was part of his homily, and that’s it. If he feels strongly about something, Martin just says it.’

“He’s happy with himself. There is no fear of him running away, he wouldn’t be one of them people…There’s a lot of gay priests but nobody will actually get up and say it.’ “ 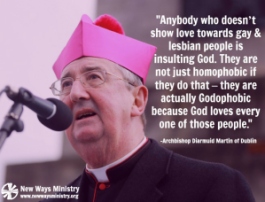 Dublin’s Archbishop Diarmuid Martin has a positive record on LGBT issues, previously criticizing the homophobic tone of the same-gender marriage debate in Ireland and saying church teaching on sexuality is “disconnected from real life experiences of families.” It will be interesting to see how the archbishop handles Dolan’s coming out and endorsement of same-gender marriage.

Ireland, one of the most Catholic of nations, has recently shown that its citizens are strongly supportive of LGBT equality, despite opposition from the nation’s hierarchy. The referendum is schedule for May, with a recent poll showing 71% of Irish citizens supporting equal marriage rights.

Parishioners, however, are clear that their support lies with Fr. Dolan. Liz O’Connor concludes:

” ‘I wouldn’t like to see him being moved for the statement he made. That would be horrendous. He should be supported. He has done nothing wrong. If he’s moved, there would be uproar in this parish. He’s still the same man today.’ “

New Ways Ministry applauds Fr. Dolan for his tremendous integrity and for having the courage to speak forcefully for LGBT rights. When Belgian Bishop Johan Bonny called for the church to formally recognize gay couples, this blog said “courage breeds courage.” Let’s pray that in 2015 more clergy find the courage to speak their truth and promote an inclusive Gospel.

ALL ARE WELCOME: Parish Discussions Keep Synod on Family's Efforts Goi... Picking Between LGBT Children and a Family's Faith is a False Choice, Says...
Loading Comments...
%d bloggers like this:
Scroll to top