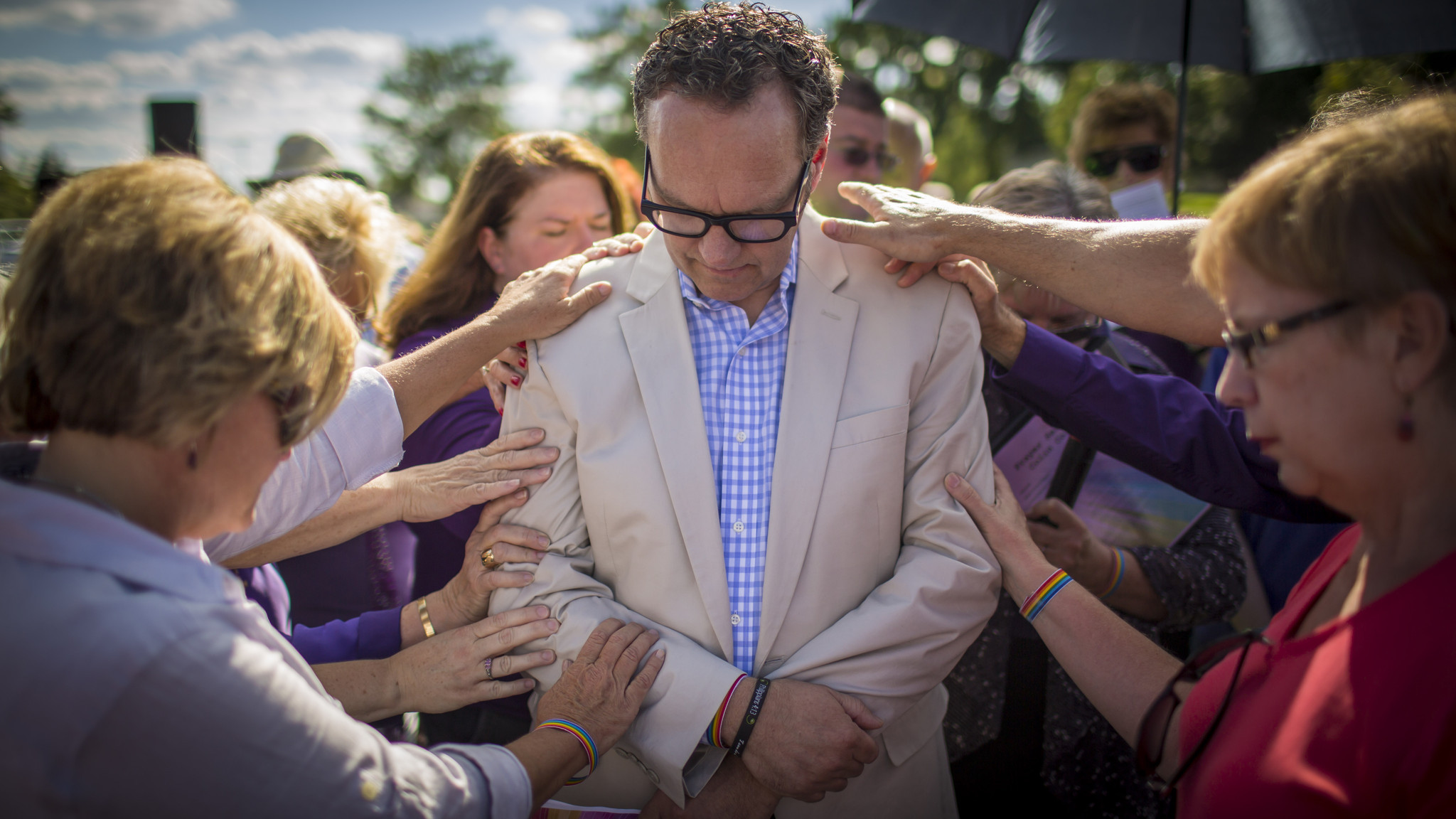 Supporters pray over Colin Collette during a vigil

Fired church worker Colin Collette will not be returning to his job, even after meeting with Cardinal Francis George of Chicago this week and ongoing protests from parishioners demand that he be rehired.

A subplot to this story, however, is how fractured the American bishops can often be when it comes to LGBT issues.

Collette asked for the meeting to discuss his dismissal as Holy Family Church’s choir director, which came about after Collette posted on social media about his engagement to William Nifong. Collette has previously expressed his desire to return to the staff of Holy Family, where he had worked for more than seventeen years and was loved by the community. A statement on the Cardinal George meeting from the former church employee reported by the Chicago Tribune was positive and quotes him as saying:

” ‘I was incredibly grateful to the cardinal for meeting with me. This is an incredibly difficult time for him [as George is undergoing cancer treatment]…I was moved beyond words that he would meet with me.We prayed together. He was wonderful. He was very pastoral.’ “

Though the cardinal willingly met with Collette, Michael O’Loughlin of Crux reports George placed blame for the “crisis” on the employee and said Collette’s choice to marry now makes working in a Catholic parish “impossible.”

Meanwhile, parishioners at Holy Family continue to demand justice for Collette. The Sunday before Collette’s meeting with the cardinal, supporters held a prayer vigil outside the church. In August, more than 700 people attended an August town hall called by the pastor, Fr. Terry Keehan, and support for Collette was overwhelming. Additionally, music ministers like Kevin Keane have resigned in protest and parishioners like Bill Leece have written to the media demanding an apology from Catholic leadership. One parishioner framed the new reality as, “Everybody was welcome…That’s become a lie.”

While Collette described the meeting with Cardinal George as pastoral, Chicago Catholics saw a different side to the prelate in his weekly column which viciously attacked marriage equality’s progress.

Highlighting the real, but bygone reality of anti-Catholicism in US history, George identifies LGBT advocates as imposing their views on society and anyone who objects “places their citizenship in danger.” Those who consider themselves “progressive” are, for George, the inheritors of the anti-Catholic of the nativists, the Know-Nothings, or the Ku Klux Klan. All of this results in a “crisis of belief” for Catholics, says the cardinal when American society becomes intolerant of those cannot continue discriminating. He sees the situation as comparable to Islam’s Sharia law.

Cardinal George’s arguments are flawed because there is neither a persecution of Catholics in the US nor does he seem to understand Sharia or LGBT issues.

What is notable is the contrast between Cardinal George’s interpersonal behavior, for I do not doubt Collette’s account that he was pastoral, and Cardinal George’s public persona which is harsh and embittered. How does this split develop and why can the cardinal not see that writing the column is pastorally damaging? Doesn’t he see thatLGBT people and their allies are indeed human persons worthy of his respect and compassion?

This fractured behavior, of personally being pastoral while publicly being partisan, is not unique to Cardinal George and by many accounts a few of the most anti-gay bishops are indeed quite compassionate people during personal encounters. As civil marriage equality progresses, church leaders need to address this dissonance that leads to so much damage, including the firing of LGBT church workers.

A new integrated approach is necessary when speaking with and about people who are in same-gender marriages. New Orleans Archbishop Gregory Aymond’s pastorally-inclined response to a Louisiana court’s ruling that the state’s ban on same-sex marriage rights could be one model of moving forward. Francis DeBernardo noted that the archbishop used minimalist language when discussing the marriage case, and shifted the emphasis to his renewed commitment to help LGBT Catholics and their families through pastoral outreach. While not perfect, Aymond’s example could be a way forward in rediscovering the “respect, compassion, and sensitivity” due to the LGBT community by church officials.

At the very least, leaning toward the pastoral could mean an end to the firing of LGBT church workers, many of whom could repeat Colin Collette’s words that “my whole life has been the church. It’s my love. It’s my passion, and I pray for the opportunity to [minister again].”

For Bondings 2.0‘s full coverage of ‘Employment Issues,’ click the category to the right. For a full listing of LGBT-related firings, with links for further information, click here. And if you are interested in helping protect LGBT and ally church workers by implementing an inclusive non-discrimination policy at your local parish or Catholic school, more information on how to do this is available by clicking here.

How LGBT-Friendly Are the Appointees to the Synod on Marriage and Family?St. Patrick's Day Parade's LGBT Decision Irks Church Traditionali...
Scroll to top
%d bloggers like this: