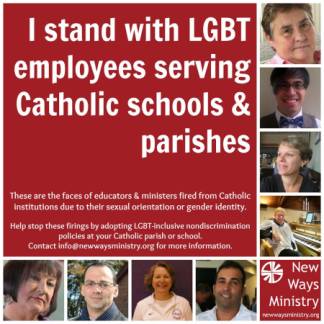 Last Saturday, Bondings 2.0 reported on the coming out of Nate Alfson, coach at a South Dakota Catholic high school, and raised the question of whether the school administrators would allow him to remain employed. Now it is clear that St. Mary’s High School will welcome the newly-out Alfson with open arms.

After coming out in an article for OutSports, Alfson, who coaches volleyball and baseball, met Tuesday with administrators. It was in this meeting Alfson was told he could keep his job, of which the Argus Leader reports the coach saying:

” ‘We talked about being on the same page as each other and that they were willing to walk through this with me and support me…They want me to be their volleyball coach again and that I was a great role model to the athletes.’ …

” ‘I couldn’t be happier that they are supportive and want me to be a part of the coaching team…It’s a sense of relief to be able to move forward and focus on volleyball and the girls. This season is about them and the hard work they put in. The support has been amazing and I can’t wait to live a free life.’ “

School administrators did not comment, though the Diocese of Sioux Falls released a statement saying gay church workers are welcome to work as long as their lifestyles were deemed chaste, the same expectations made of heterosexual workers.  (Though the definitions of chastity are different for these two groups.)

Alfson’s decision to come out publicly was a courageous one, especially with so many recent instances of LGBT church workers being fired for telling the truth about their lives. New Ways Ministry tracks the firing and resignations of LGBT and ally church workers. Fourteen people have been forced out this year alone. I was worried that after writing about Alfson’s deeply personal and wise article, I would shortly be writing the story about his firing too. That St. Mary’s administrators are willing to stand by Alfson and foremost follow Catholic teachings on the dignity of each person and social justice, especially relating to labor issues, is a hopeful sign.

This development comes in the same week that news broke that a high school run by the Sisters of Mercy dedicated their athletic field to alumna Abby Wamback, an internationally famous athlete who is also a married lesbian.

Now, it is essential for Catholic schools to keep this momentum going. The last two weeks, staff members from New Ways Ministry have attended annual meetings for the Conference of Major Superiors of Men and the Leadership Conference of Women Religious, the two separate organizations of the leaders of men’s and women’s religious communities in the U.S. While at these meetings, New Ways Ministry is asking these leaders  to implement LGBT-inclusive non-discrimination policies at their schools and institutions.   At our exhibit table, we are distributing a brochure explaining how such policies can be adopted.  While non-committal, the leaders’ responses have been positive to this idea.

Additionally, you can advocate for LGBT and ally church workers by raising the issue of non-discrimination policies within their your local parish or Catholic school. Below are suggestions for how you can make a difference:

1. Educate Yourself. Learn more about the current challenges LGBT church workers face, including firings, by reading Francis DeBernardo’s essay in Conscience magazine. You can find that by clicking here. Bondings 2.0 also lists every LGBT-related public firing at a Catholic institution since 2008 on our “Catholicism, Employment, and LGBT Issues” page. There you will find further information about each case. Finally, you can read Bondings 2.0‘s full coverage by checking out the ‘Employment Issues‘ category to the right and to receive the latest updates enter your email in the “Subscribe” box in the upper right hand of this page.”

2. Take Action. Adding a sufficient non-discrimination policy at your local Catholic institution could be as simple as adding the following: “(Name of parish, school, or institution) will not discriminate in employment practices on the basis of marital status, sexual orientation, gender identity, and personal support for marriage equality.” For more tips on establishing LGBT-inclusive policies, click here.

3. Connect. If you want help with adopting a non-discrimination policy or anything related to Catholic LGBT employment issues, you can contact New Ways Ministry by emailing info@newwaysministry.org or calling (301) 277-5674 for further resources and information.

Now that Nate Alfson is proudly out and ready to return to coaching, he told reporters: “I can breath, I can smile, and I’m not afraid to cry, and I’m not afraid to feel what I’m feeling.” It is past time to make this sense of freedom and authenticity normative for every teacher, student, administrator, parent, and alumni involved with Catholic education. What difference will you make this fall?