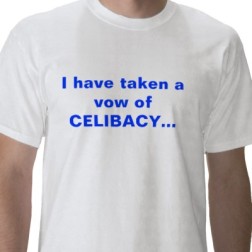 Religion News Service published an article this week entitled “Gay, Christian and … celibate: The changing face of the homosexuality debate,” which examines how the concept of celibacy is re-shaping the conservative religious establishment’s approach to lesbian and gay issues.   That is a shame for gay and lesbian people, religion, and, most of all, celibacy.

“When Exodus shut down in 2013, some said it spelled the end of ex-gay ministries that encourage reparative or conversion therapy for gays to become straight. Ex-gay groups such as Restored Hope Network stepped in to the gap, but many religious leaders are now encouraging those with same-sex orientation or attraction to consider a life of celibacy. . . .

“Earlier this year, the 50,000-member American Association of Christian Counselors amended its code of ethics to eliminate the promotion of reparative therapy, and encouraged celibacy instead.”

Not surprisingly, these conservative religious groups have looked to Catholicism, which has a long tradition of celibacy, for support in this endeavor.  The article states:

“Some evangelicals mine Catholicism’s centuries-old tradition of celibacy, said Wesley Hill, a professor of New Testament at Trinity School for Ministry, who wrote Washed and Waiting, a 2010 book on being gay and celibate.

“‘They already have a rich history of celibacy that I had to discover as an evangelical,’ Hill said. ‘Twenty years ago, being gay would be considered irredeemably bad, something to be delivered from or be changed. (Celibacy) leads me to form close bonds with friends, to have self-denial and sacrifice.’ ”

There is no doubt that celibacy can be a beautiful, satisfying, and enriching way to live.   And Catholicism’s history is filled with many holy and virtuous celibates.   But these conservative Christians will be making the same mistake that Catholic leaders have made for decades by saying that celibacy is the only moral option for lesbian and gay people.

Catholicism, and perhaps more accurately, early Christianity viewed celibacy as a gift and a calling.  It was something that grew out of a personal relationship with God and also seen as a way of responding to this relationship.  It was never something that was required of a whole class of people.  It was seen as a calling, a vocation, which arose out of one’s spiritual longings and experiences.

In the Middle Ages church officials eventually did make it a discipline and requirement for ordination to priesthood, but it was something that, in most of the ordinary circumstances, no one was morally required to adopt because of an outside moral obligation.

Most importantly, for the most part celibacy was seen as something that grew in the context of community.  Religious celibates enacted their calling with the mutual support of others who shared a similar call in a monastery, convent, and eventually in religious life that stressed apostolic ministry.

So, when Catholic leaders make the case that celibacy is the moral requirement of all lesbian and gay people, they are actually re-imagining a totally different understanding of what celibacy is.  Instead of a calling, it seems to be imagined as a punishment or a remedy.  Celibacy of this kind cannot be life-giving to individuals or to the community of the Church.

I have met many lesbian and gay Catholics who are called to celibacy.  They live their lives as priests, in religious communities, and as lay people active in the world.  Their celibacy is a calling, a response, and a choice.  For them, it is a joy.

I have also met a number of celibate people, both homosexual and heterosexual, who experienced this life practice as a burden and an unwanted cross.  For some, it is viewed as an endurance test rather than as a spiritual aid.  They are not happy people, and I cannot imagine that God wants them to live so unhappily.

For conservative Christians to turn to celibacy as a way to deal with an unwanted homosexual orientation, they are not experiencing the gift of this practice in the way that God intended.  If they are turning to Catholicism for a model in how to live celibacy, they should also pay attention to the way that Catholics have abused and mistreated this potentially beautiful gift.

Slate.com: “Thou Shalt Not Forsake Thy Celibate Christian LGBTQ Brethren”