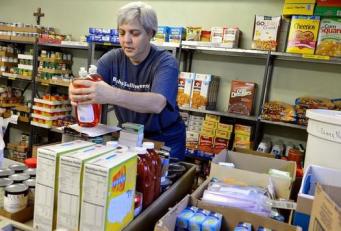 Colleen Simon at work in the food pantry

Colleen Simon was “shell-shocked” when her Catholic employer fired her for being a married lesbian woman. Now, Simon is firing back in a lawsuit against the Diocese of Kansas City-St. Joseph filed last Thursday.

The lawsuit also includes Bishop Robert Finn, who in 2012 was the first U.S. bishop convicted of a crime relating to clergy sexual abuse of children, and it alleges civil fraud because Catholic administrators told Simon her marital status would not be a problem.

Simon coordinated the St. Francis Xavier Church food pantry in Kansas City, Missouri, before being fired for her marriage to Lutheran pastor Donna Simon. Rachel Zoll of the Associated Press details how the firing came about:

“In each step of the hiring process, she said she told administrators she had married a woman a year earlier in Iowa, where gay marriage is recognized, and diocesan and parish representatives said her marital status would not be a problem…

“When a new priest was assigned to the church, Simon said she told the new pastor she was in a same-sex marriage. Then, the Simons were mentioned in a news article about the redevelopment of their neighborhood, accompanied by a photo of Colleen Simon working at the food pantry.

“Soon after, the priest told Simon he had to fire her over the article. The dismissal letter sent last month from the diocese human resources director said she was fired because of the ‘irreconcilable conflict between the laws, discipline and teaching of the Catholic Church, and your relationship — formalized by an act of marriage in Iowa — to a person of the same sex.’ “

Brian Roewe of the National Catholic Reporter provides further details about what led up to the firing, and notes that the news article was a lengthy magazine piece featuring a dozen people alongside Simon who are involved with community development near the Jesuit-run St. Francis Xavier Parish. Roewe continues:

“Buried in the 79th paragraph, the story mentions Colleen’s and Donna’s marriage; so does a caption for a photo of Colleen Simon in the food pantry.”

Simon recalls that when she told Jesuit Fr. John Vowells about the firing of an LGBT employee from another Jesuit institution, he said “he couldn’t imagine that happening at St. Francis.” The new priest, Jesuit Fr. Rafael Garcia, also informed Simon the marriage was okay and even met her wife. Roewe explains how events turned:

“After the Star story ran, Garcia emailed Simon expressing his displeasure about the revelation of her marriage. According to the lawsuit, Garcia also contacted the reporter of the story to ask what Simon said about her marriage. He asked the reporter if she was Catholic, and when she replied she was not, he ‘stated to her that she didn’t know what she had done,’ the suit said.”

It appears Simon sought reconciliation before filing the lawsuit, but was rebuffed by the diocese. Simon’s lawyer said there had been no contact from Church officials for several weeks. Jack Smith, who is communications director for the Diocese of Kansas City-St. Joseph, said he had not seen the lawsuit but “as a Church we have the right to live and operate according to our faith and Church teachings.”

Currently, Colleen Simon is searching for work pursuant with her passion for upending social injustices. She has said the firing was a mix-up and would love to return serving the St. Francis Xavier community if it could be sorted out appropriately, saying further:

Bondings 2.0 reported on Simon’s firing in May, which you can read here. At that time, we questioned why Catholic officials continued to fire LGBT employees when the negative impacts on the Church’s charitable efforts and pastoral work were so clear. Simon now joins the ranks of several dozen LGBT musicians, pastoral associates, teachers, and volunteers who have been forced out of their jobs since 2008 (a full listing and accompanying information is available here).

Sadly, the Church is diminished when compassionate workers like Colleen Simon are fired for whom they love, or when justice organizations like the Voz Workers’ Rights Education Project are defunded by the bishops for refusing to agree to anti-LGBT views.

Yet, Colleen Simon also provides a hopeful way forward for church workers and all struggling with unjust Catholic structures: the twin goals of justice and reconciliation. She demands accountability through the lawsuit as a mandate of justice for the wrongs committed against her, but she remains open to healing relationships and reconciling so that the Gospel work to which she feels called may proceed. May we all learn from her example as we build up a Catholic community that is just, forgiving, and inclusive!