The ALL ARE WELCOME series is an occasional feature on this blog which highlights Catholic parishes and faith communities that support and affirm LGBT people.

Toronto was the site for WorldPride this year. All Inclusive Ministries (AIM), based at Our Lady of Lourdes Church in that city, brought “its message of faith and love to this celebration” by welcoming Catholics from around the world to their monthly Mass and gathering. AIM began with support of the Archdiocese of Toronto in 2012 after the Jesuit parish ended its affiliation with Dignity Toronto Dignité, which now meets elsewhere. Another church, St. Joseph’s Church in Ottawa, sent a delegation to join AIM’s liturgy and march in the WorldPride parade, having witnessed in their local parade for many years. 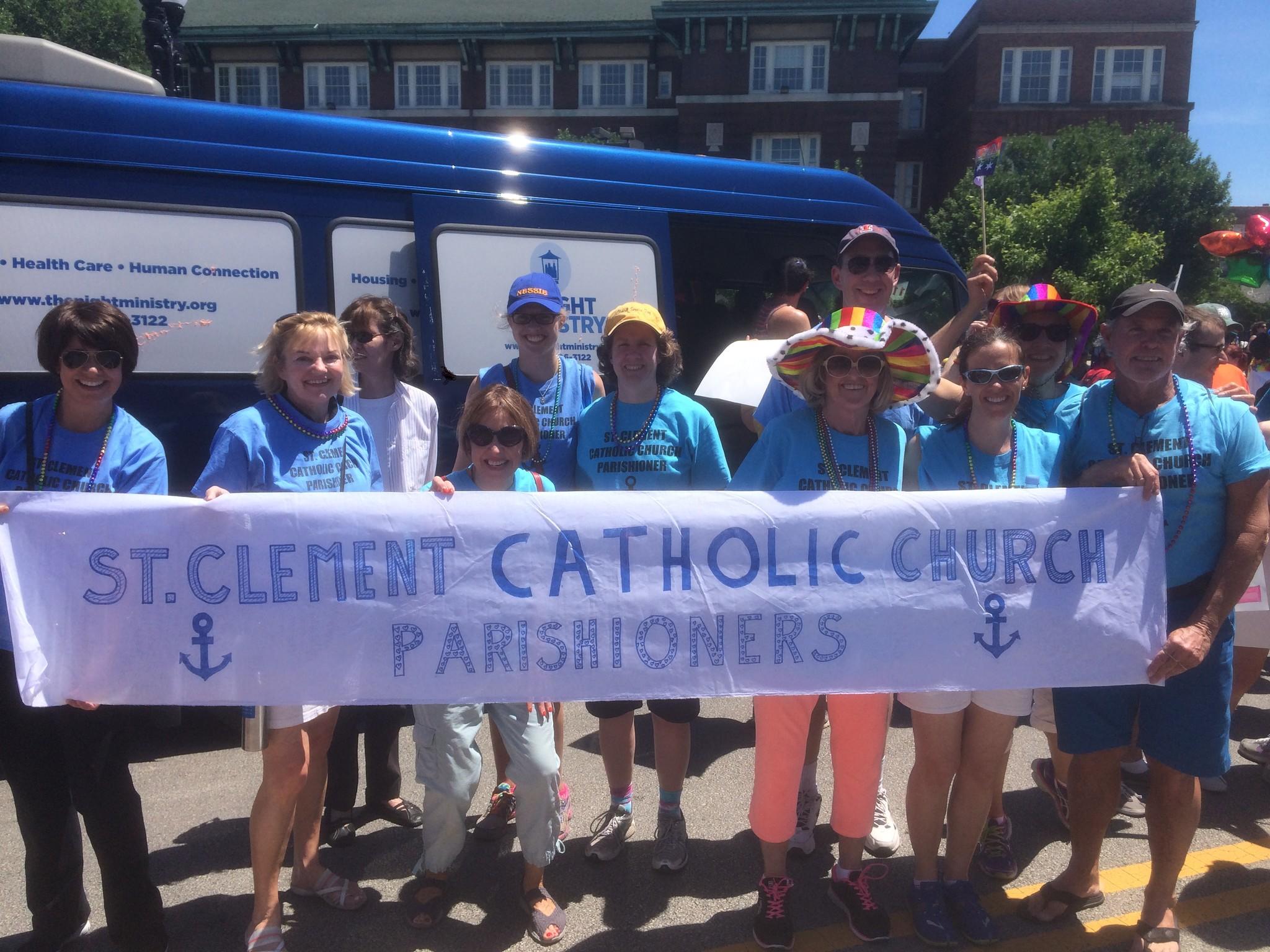 Members of St. Clement Church in Chicago march during Pride

The Ontario English Catholic Teachers Association (OECTA) also marched in WorldPride’s parade following several months of criticism from Toronto’s cardinal and others who opposed the teachers union’s decision to march. OECTA President James Ryan told the National Post the teachers’ participation was an “internal union matter” made through a democratic process. The paper reports further:

“In March, the OECTA voted to send a contingent of more than 100 to the parade as a visible and vocal message that Catholic-school teachers in the province want students to feel supported and free from discrimination.

“OECTA is just aligning with other public unions and teachers’ unions Canada-wide, said Mr. Ryan, whether Catholic or not.

” ‘Coast to coast in Canada, pretty much every teachers’ union I know of does support LGBT rights without exception,’ [Ryan] said. ‘The Canadian Teachers Federation has been very forward with its support for LGBT rights.’ “

You can read Bondings 2.0‘s ongoing coverage of OECTA’s decision this spring by clicking here.

Catholic parishes in the U.S. marched in Pride parades in their citis, as well. In Chicago, St. Clement Church parishioners marched alongside Dignity/Chicago members for the second year in a row. The Chicago Tribune reported on the marchers:

” ‘We don’t want to be dictated to anymore,’ said Rob Svendsen, 41, a parishioner at St. Clement for nine years. ‘With the new pope, we’ve all been given a new ray of hope.’…

” ‘What St. Clement demonstrates is there are Catholics in the pews out there who think this is a time to be united and give witness to what the church’s true mission is,’ [former Dignity president Chris] Pett said. ‘We are here to advance justice. We should be a church united in justice, love and respect for one another. What’s exciting about it is they come from a very affirming community.’ “

In Boston, contingents from both Boston College and St. Anthony Shrine were present during the city’s June 14th Pride festival. For their part, the Franciscan friars from St. Anthony’s in Boston hoisted a banner with the pope’s famous “Who am I to judge?” quote in rainbow lettering.

Franciscans from St. Anthony’s staff their Pride booth in Boston.

In San Francisco, St. Agnes, Most Holy Redeemer, and other Bay Area parishes joined together to ‘show their Catholic pride‘ at the city’s parade.

Parishioners from St. Francis Xavier in Manhattan in the city’s Pride parade.

In New York City, parishioners from St. Francis Xavier Church marched, as did a collaborative contingent from various metro NYC area gay-friendly parieshes,  marching behind the banner of “LGBT Catholics and Friends.”

In London, England, members of the Archdiocese of Westminster’s pastoral outreach to LGBT people (called “Soho Masses” because of the neighborhood in which they originated) took part in that city’s pride march, complete with a giant street puppet of Jesus draped in a rainbow flag.  More photos can be found here.

Repeatedly, Pride participants cited Pope Francis as a reason for their witness this month and also tied their actions to the Church’s standing commitment to social justice that has resulted in American Catholics’ overwhelming support for LGBT equality. Earlier this month, Bondings 2.0 suggested that marching for Pride was a key way to show solidarity for church workers under increased scrutiny for their support and involvement with marriage equality or because of their gender identity.

Additionally, many of the parishes mentioned above are on New Ways Ministry’s listing of gay-friendly Catholic parishes and communities. To find a parish near you, or to suggest a new parish for the list, please click here.

Did your parish or Catholic school participate in a Pride celebration? Let us know in the ‘Comments’ section below, so we can continue spreading the good news of an inclusive Church in the era of Pope Francis.