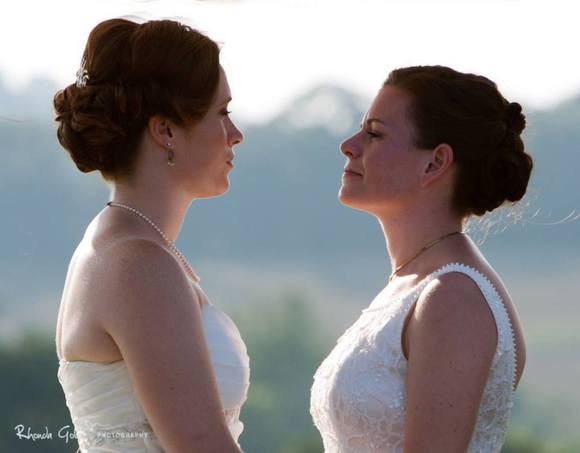 Proving that Catholic religious and lay people have  the power to effect change in our Church, a Maryland high school has reversed its decision to deny same-gender couples recognition in the alumnae newsletter.

In January, news broke that Notre Dame Preparatory School, Baltimore, had rejected 2003 alumna Sarah Rupert-Sullivan’s announcement about her marriage to wife, Molly, from the school’s “Class Chatter” notes in the alumnae newsletter. The administrators of Notre Dame Preparatory, which is run by the School Sisters of Notre Dame, cited a conflict with Church teaching as the reason for the decision, but over 1,600 people signed a petition in support of Rupert-Sullivan and her wife. You can read Bondings 2.0‘s original coverage of the event by clicking here.

Having learned of the news, alumna Pat Montley, a former School Sister of Notre Dame herself, wrote to the administrators about her own negative experience with the same situation. A decade ago, her own same-gender wedding announcement was rejected, and each class note submitted since has had any reference to her partner expunged. Writing to the Schoo Sisters of Notre Dame’s Mid-Atlantic provincial team, Montley statd, in part:

“I am sending the letter to you now in the hope that that you will find it persuasive in reversing this policy.  You would not be alone among local Catholic schools in having a more open policy…

“My teachers at Notre Dame Prep played an immeasurably important role in my life–not just in helping me develop and pursue a life of the mind but in the formation of my conscience and habits of the heart.  I will always be grateful for that training and feel an immense affection for many of those teachers.  Though most are no longer living, I am still in touch with and have visited most who are…and am happy to say they have embraced Sally as my partner/spouse and rejoice in our marriage.  I hope that you can do the same, and that this embrace can be reflected in SSND schools’ publication policy…

“Over the years, I have repeatedly submitted entries to class notes that included a mention of Sally, as schoolmates have done with their spouses…Sadly, each time, her name and any references to her were expunged.  I implore you to try to understand how hurtful this is, what it feels like to have the primary, sustaining relationship in my life rejected and unacknowledged by my alma mater–which, ironically, provided the spiritual values that have made me capable of and desirous of having such a loving and long-lasting relationship in the first place.  It breaks my heart.”

Sr. Jeannine Gramick, co-founder of New Ways Ministry, who was a School Sister of Notre Dame before transferring to the Loretto Community, wrote her own letter to the provincial leadership. In it, she stated:

“This unfair policy makes me feel sad because SSND supported me in lesbian/gay ministry from the early 1970s to the late 1990s. Three SSND General Superiors and three SSND provincial leaders supported this ministry for many decades—at a time when lesbian/gay issues were very unpopular. These leaders believed in the human rights of lesbian and gay people, despite the opposition of some church leaders.

“It is distressing that SSND is now maintaining a reactionary stance in its schools when the tide of public opinion has shifted dramatically. According to a number of recent polls, most U.S. Catholics today now support same-sex marriaege (53% according to the 2014 survey from the Public Religion Research Institute)…

“The basic principle of the Church’s social teaching is that all human beings have dignity and worth and should be treated fairly and equally. In school publications, administrators would not treat males and females differently by publishing information about males, but not females, or vice versa. Administrators would not treat people of color differently by publishing information about white students, but not about Black students. Similarly, administrators need to treat people uniformly, whatever their sexual orientation.

“I urge you to change all SSND policies that discriminate against sexual minorities. To do otherwise is not worthy of us as women religious who profess to follow Jesus’ Gospel of love, service, and care for all God’s people.”

These two missives accompanied letters from many alumnae and community members, who have now been notified of a new policy regarding class notes that respects LGBT people and their relationships. In an email, Sister Patricia McCarron, headmistress, writes:

“After much thoughtful and prayerful discernment regarding concerns expressed about the content of ‘Class Chatter,’ Notre Dame Preparatory School has arrived at a policy which we believe respects individuals and upholds the school’s Catholic identity.

” ‘Class Chatter,’ or information submitted by alumnae of Notre Dame Preparatory School, exists for the purpose of alumnae-to-alumnae communication.

This incident, and the positive outcome that emerged from a poor decision against a lesbian couple, is proof that Catholics, lay and religious united, can indeed respond to school and parish level actions which do not reflect a more inclusive and welcoming tone which even Pope Francis demonstrates. Through sharing personal stories and wisdom with Church officials decisions can be reversed.  This kind of dialogue can help to  build up policies more in keeping with the Catholic tradition of justice and mercy.

Religious and Political Leaders Ask Archbishop to Stay Away from NOMBritish Cardinal Offers New Perspective on Context of Sexuality
Scroll to top
Loading Comments...
%d bloggers like this: