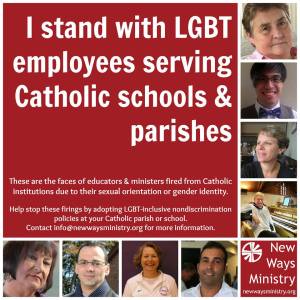 Employment disputes for LGBT and ally Catholic Church workers are making headlines nationwide. Below, Bondings 2.0 provides updates on several incidents in cases we have been tracking. You can find out more information by clicking the provided links.

Band teacher Flint Dollar was fired from a Sisters of Mercy school in Macon, Georgia recently, after plans to marry his partner became known. Students, parents, and local supporters have been resisting the firing, organizing a petition with more than 3,600 signatures, a Facebook group, and the Twitter hashtag #SaveDollar. The Telegraph reports three school board members–Kay Gerhardt, Vickie Hertwig, and Joe Claxton– resigned in support of Dollar.  Catholics United has called on Mount de Sales Academy to reverse the decision.

The Save Flint Dollar Facebook group is also reporting that Stacey Eubanks Herrara, the nursery director at St. Joseph’s Church,Macon, resigned rather than remove postings on Facebook that support Dollar when asked to do so by the church’s pastor.

Three teachers at Bishop O’Dowd High School,Oakland, California have resigned over the diocese’s new contract that includes anti-LGBT language. Kathleen Purcell’s contract, which she submitted with the two morality paragraphs crossed out, was not accepted by the school. She said of this development:

” ‘I could have taken back what I did and said I could go along, but I can’t do that…My life is about advancing civil rights.’ “

” ‘[The contract is] an unworkable dilemma forced upon us: the moral dilemma between our loyalty to a wonderful (and wonderfully diverse) school community and the demands of our personal sense of integrity and our dedication to social justice and civil rights.’ “

Diocesan spokesperson Mike Brown encouraged teachers to hold off from resigning, as there is a meeting for educators with Bishop Michael Barber being planned. According to NBC Bay Area, Barber has promised to clarify language for future contracts and insists there will be no changes for the 2014-15 school year. This response is inadequate for many, including Bishop O’Dowd parent Christina McKenna who said:

” ‘It is distressing to see the impact the words of this contract amendment have had on our school’s community…It’s a giant step backward, especially as we strive to teach our children inclusion, tolerance, and respect.’ “

“Some bishops are responding to this behavior [of same-gender marriages being public], Reese said, by ‘arguing that these people are not observing Catholic teachings and therefore shouldn’t be working for us.’

” ‘I don’t think their argument holds water…If they were consistent, they’d fire anyone who got divorced and remarried, or who lived together.’ “

More than 21,000 people have signed Faithful America’s petition in support of Colleen Simon, the lesbian woman fired from her position as social ministries coordinator at a Kansas City, Missouri parish. The petition states:

“Colleen has devoted her life to helping the hungry. She’s in a loving, committed relationship. Even now, she bears no ill will toward her church, instead praying for ‘the day when we are all loved and embraced by our churches.’…

“At a time when Pope Francis and leading bishops are calling for a new tone, it is cruel and discriminatory to fire a dedicated Christian servant because she is in a loving, committed relationship with another woman. We call on you [Bishop Robert Finn] to apologize to Colleen Simon and allow her to resume her work helping the needy in Kansas City.”

You can sign the petition by clicking here, and read full coverage about Simon’s firing here.

Cincinnati is in turmoil over the archdiocese’s new contracts for teachers. At least five educators have been fired or resigned in recent years over LGBT issues. These include Molly Shumate, whose son is gay, Richard Miller, a partnered gay man, and Richard Hague, who refused to sign because he did not believe “that Jesus would require me to condemn my friends.”

The contract dispute was on center stage during this year’s Pride Parade, reports Cincinnati.com, and several Cincinnati teachers were included in the Human Rights Campaign’s letter to Pope Francis, asking that he meet with fired teachers.