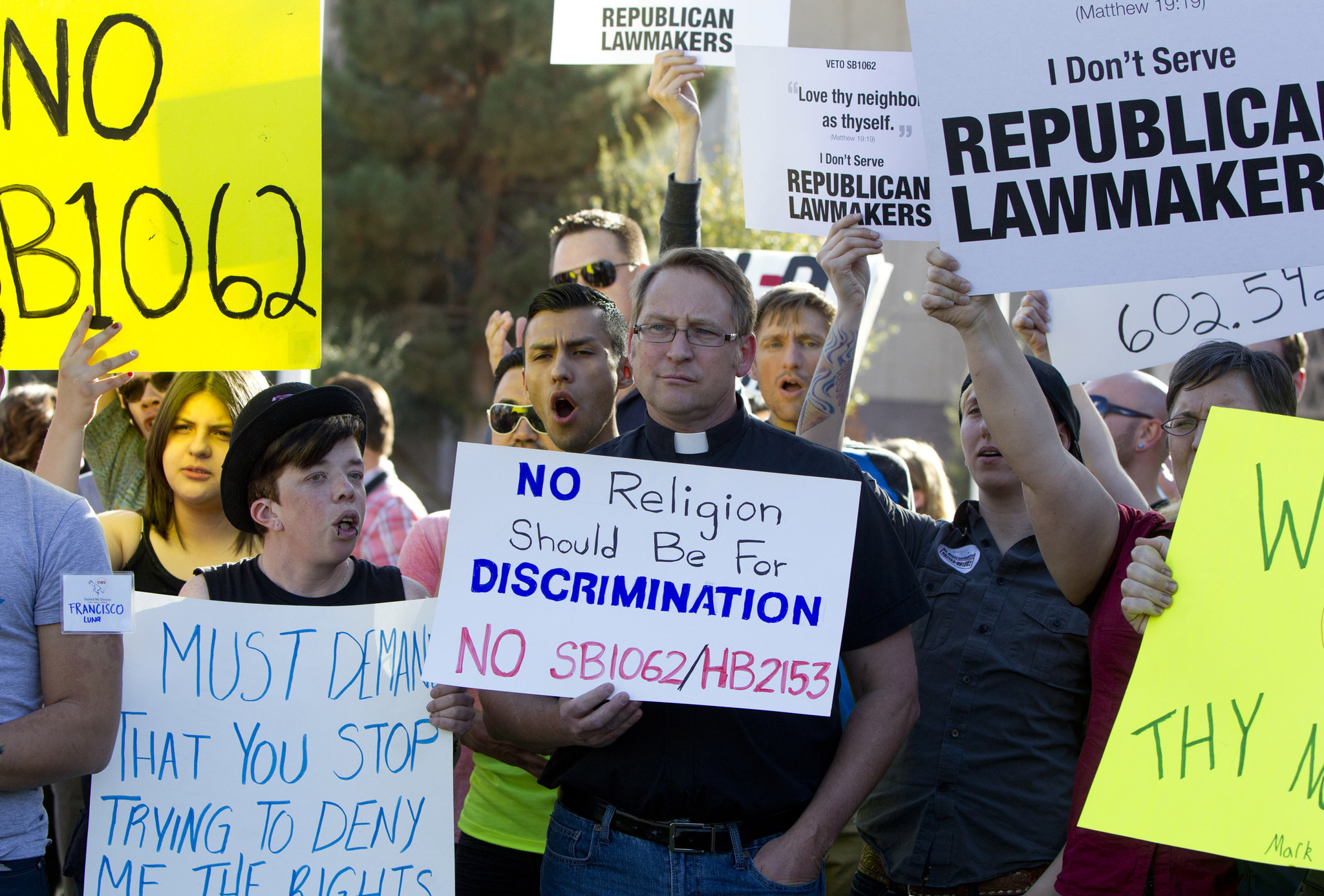 Arizona Governor Jan Brewer’s veto of an anti-gay discrimination bill was cause for celebration last week, but the trend of legislation targeting LGBT people is growing in the US and abroad spurred on, in part, by Catholics. But, some commentators are rightly questioning how Catholics can aid attempts to criminalize homosexuality or allow discrimination based upon sexual orientation, given that these actions are inconsistent with Catholic teaching and may even harm legitimate religious liberty concerns.

In Arizona, SB 1062 would have allowed businesses to refuse services to gay and lesbian people under the premise of religious liberty. Though major corporations, Arizona’s Senators, and even leading Republicans like Mitt Romney and Newt Gingrich knew how erroneous such a law would be, the Arizona Catholic Conference actively supported the bill by requesting Catholics contact Governor Brewer to sign the bill. Similar bills have either been introduced in considered in at least ten other states, including Kansas, where the Catholic bishops there also voiced support for anti-gay discrimination.

In response, Catholics with varying views on homosexuality are unified in their condemnation of laws targeting LGBT people. Before th Arizona law was vetoed, Michael Sean Winters wrote in the National Catholic Reporter:

“This law has not been advanced at this moment to remedy a constitutional infirmity. It has been advanced by those who oppose gay marriage…The text of the law may not target gays. The political intent clearly does. And, that is why it was a mistake for the Arizona bishops to voice their support for it.

After the veto, Winters followed up with another piece expanding his reflections to the American bishops at large:

“Those who cherish religious faith ought to be heartsick that it is so often invoked not to advance compassion and understanding but rather to justify discrimination and even bigotry. This is doing serious harm to our religious traditions, particularly among the young…

“For both pragmatic and principled reasons, supporters of marriage equality have already gone out of their way to respect the objections of many faiths to blessing homosexual unions.

“In November 2012, Maryland’s voters approved gay marriage by a majority of 52 percent to 48 percent. Key to this victory (and to victories elsewhere) was the willingness of marriage equality’s supporters to acknowledge the freedom of religious institutions to run their own affairs.”

Both Winters and Dionne also note troubling effects for the Church which stem from the bishops’ support for discrimination of LGBT people, namely that young people leave in hordes over this matter. They write:

Dionne: “The millennials are more detached from organized religion than any earlier cohort of young Americans since polling began: Roughly one-third rejects formal religious affiliation. Many scholars — notably Robert Putnam and David Campbell, whose ‘American Grace’ is the definitive book on the United States’ religious landscape — attribute this to the hyper-politicization of faith on the right.”

Winters: “Instead, once again, we have aligned our preaching of the Gospel with a political agenda that is championed by hateful bigots. And, then we wonder why young people want nothing to do with us? When bishops gather to bemoan the secularization of our society, they should start by looking in the mirror. If the face of Christianity is an angry hotelier who wants to place a ‘straights only’ sign outside his inn, then we have no one but ourselves to blame for the decline of Christian faith.”

Yet, there are signs of hope. Several outlets, including Tikkun, The Atlantic, and Talking Points Memo, have published articles claiming this wave of anti-gay discrimination laws is merely the final breaths of a dying extreme right based in religion. Elsewhere, Pope Francis has laid out his vision for more pastoral bishops. Catholic leaders and organizations condemned Uganda’s harsh anti-gay law passed last week, while in the US there is rapidly strengthening resistance to the firing of LGBT church workers.

Whether anti-gay laws signal an approaching civil victory in full or merely the next step in an ongoing struggle for equality is unclear. What is clear is that Catholics, regardless of their views on homosexuality and sexual ethics, must stand together for the human rights and dignity of every person–or as Jesuit priest James Martin said:

"Philomena" Film Contains Lessons on Justice & Forgiveness for...How Did Catholics Fare in the Latest Report on LGBT Acceptance in the U.S.?
Scroll to top
Loading Comments...
%d bloggers like this: