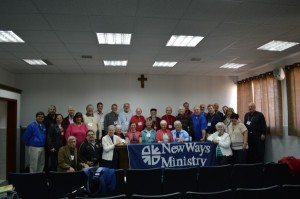 LGBT and Ally Catholics met with Archbishop Elias Chacour on Monday, as part of a pilgrimage being led by New Ways Ministry to Israel this week. The 36 pilgrims dialogued with the archbishop for nearly two hours on a breadth of issues.

Until recently retiring, Chacour was archbishop of the Galilee in Palestine for the Melkite rite, which is in communion with the Vatican. Chacour spoke with the pilgrims from his personal background to the Palestinian/Israeli conflict. The program began with an introduction from Sr. Jeannine Gramick, co-founder of New Ways Ministry, and a solicitation by the archbishop of why the pilgrims had journeyed to the Holy Land.

Afterwards, Chacour spoke about what it meant to minister as a man from Galilee, sharing a common location with Jesus Christ. His wisdom comes from both historical roots in the land where Jesus lived and ministered, as well as theological education, and the archbishop told the group:

“We Palestinian Christians are not good philosophers, and even worse theologians, because we are obsessed with telling the story of our man from Galilee…

“Those invited to the banquet of heaven are every man and woman without exception…You are called to be the adopted children of God…Nobody is important, but nobody is replaceable…

“All I remember is God does not kill and God is love. tThe rest is commentary.”

In addition to his work as archbishop, Chacour runs educational initiatives that have blossomed into a system offering  early childhood programs to university degree programs for nearly 3,000 students based out of the village called Ibillin. Though he offered anecdotes from these work, his overarching insights focused on creating unity and respect amid diversity between Palestinians and Israelis and these lessons are familiar ones for those working for LGBT justice in the Church.