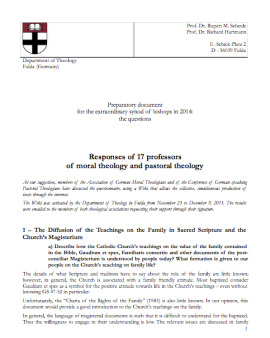 The responses were drafted by representatives of the Association of German Moral Theologians and the Conference of German-Speaking Pastoral Theologians, and signatories included some of the most highly regarded theologians in the German-speaking academic world. According to the National Catholic Reporter, the letters said:

“Church sexual teachings…come from an ‘idealized reality’ and need a ‘fundamental, new evaluation.’

” ‘It becomes painfully obvious that the Christian moral teaching that limits sexuality to the context of marriage cannot look closely enough at the many forms of sexuality outside of marriage.’ “

The theologians responded in full to the Vatican’s questionnaire, but they went beyond merely criticizing the inconsistencies and harmful elements of the hierarchy’s teachings. The article continues:

“The theologians also propose that the church adopt a whole new paradigm for its sexual teachings, based not on moral evaluations of individual sex acts but on the fragility of marriage and the vulnerability people experience in their sexuality…

“Moving to their proposal for a new paradigm of evaluating sexual acts, the theologians say the church needs to appreciate the nakedness and vulnerability people experience in their sex lives.”

When writing specifically about same-gender relationships, the German theologians responded to the questions which asked what pastoral attention should same-gender couples receive and how to pastorally care for their children:

“There is ‘pastoral attention’ in many forms, but it is not enough. An official statement should signal clearly to persons in same-sex civil unions that faithfulness, dependability and solidarity are not worth less in the eyes of the Church because shown by gays and lesbians. This does not require a pre-decision for the equality of their unions with marriage…

“Fundamentally, the transmission of faith is not more difficult for same-sex couples than for heterosexual couples. If homosexuals ask for baptism for their child, one should appreciate that they intend to raise their child according to the Credo. Children can never be refused the sacrament because they grow up in the context of a homosexual partnership (cf. ‘Evangelii Gaudium’, 47).
“Regarding the communal spirituality in such a constellation, it is important to use the metaphors of mother and father for God in a differentiated manner. Moral teaching that is not idealistic, but anchored in the theology of grace, would also be helpful.”

You can read the full letter, including the entirety of the theologians’ responses to the questionnaire, at the National Catholic Reporter‘s website by clicking here.
It is hopeful to see the responses coming in from lay Catholics, theologians, those in religious life, and elsewhere in the Church which advocate for a rethinking of sexuality, marriage, and family life. What impact they will have during next October’s Synod is not clear, but it is a change in the Church that input is even being solicited and honestly given.
–Bob Shine, New Ways Ministry