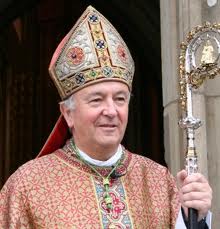 This past week, Pope Francis named his first group of cardinals.  News reports noted that a significant feature of the new group of 19 men that he chose was that many of them were from the developing world.  One cardinal named, who was not from the developing world, is significant in another way: he has had a strong pastoral outreach to LGBT Catholics, even in the face of staunch criticism against such an approach.

Cardinal-elect Vincent Nichols, who is archbishop of Westminster (London, England), is well-known in Great Britain for supporting the Soho Masses, a bi-monthly liturgy for LGBT Catholics in London’s Soho neighborhood.  While many believed he was pressured by conservatives to discontinue the Masses in Soho, Nichols offered an alternative by establishing an archdiocesan outreach to LGBT Catholics, which has blossomed, at a parish in London’s Mayfair neighborhood.

While he opposed Great Britain’s marriage equality bill which was passed into law last year, he was an early voice from the Catholic hierarchy in support of civil unions, a policy which was also supported by Pope Francis when he was Archbishop of Buenos Aires, Argentina.

London’s Guardian newspaper had this to say about Nichols’ appointment as cardinal:

“Despite the immutable nature of church teaching on homosexuality and his own criticisms of the government’s gay marriage plans, Nichols’s outspoken defence of fortnightly masses for gay, lesbian and transgender Roman Catholics won him gratitude and respect.

“The Soho masses ended a year ago, reputedly because of pressure from the Vatican and an outcry from traditionalist British Catholics who disapproved of what they saw as a celebration of homosexuality.

For six years, however, they were a fixture – and staunchly defended by the archbishop. In 2010, Nichols laid into critics of the Soho masses, saying: ‘Anybody from the outside who is trying to cast a judgment on the people who come forward for communion really ought to learn to hold their tongue.’

“It was a sentiment echoed by Pope Francis, who last year declared: ‘If someone is gay and seeks the Lord with good will, who am I to judge?’

“It had been rumoured that Müller, one of Nichols’s fellow cardinal-elects who was appointed prefect of the CDF in July 2012, had been keen to stop the masses and clamp down on any perceived challenges to Rome’s authority.

“When he announced the end of the masses, Nichols stressed that the church’s ‘teaching on matters of sexual morality’ remained unaltered despite recent legal and social changes surrounding ‘same-sex attraction.’

“But he has also hinted that the church could find itself forced to show more flexibility when it comes to its treatment of same-sex unions. Asked in a BBC interview whether the Roman Catholic church might eventually find itself imitating the Church of England – some of whose vicars have unofficially blessed gay unions for years, he replied: ‘I don’t know. Who knows what’s down the road?’ ”

“According to Austen Ivereigh, ex-director of public affairs for Murphy-O’Connor and co-ordinator of Catholic Voices, Nichols’s commitment to a more inclusive church closely resembles that of the pope. ‘If anything, I think Francis would be extremely sympathetic to the Soho masses,’ he said.

” ‘Francis likes pastoral bishops; he likes bishops with the smell of sheep and Vincent is a very experienced pastoral bishop and has a very pastoral approach to the sacraments – as he demonstrated with his open-door policy in the church, which I think is very much in the mould of Francis.’ “

“There are some in our community who were deeply hurt and angered by his ending of the Soho Masses for LGBT Catholics in Warwick Street, and especially for the manner in which it was done, without meaningful consultation, a year ago.  However, to counter that criticism, we must remember that prior to that announcement, he had held out for a long time, resisting extensive pressure from both Rome and local conservative activists to do so. Some years before Pope Francis attracted world – wide attention for his statement about gay Catholics, ‘Who am I to judge?,’ Nichols had said much the same thing. . . .

“When eventually he did succumb to the pressure, he showed remarkable creativity: instead of simply ending the Masses, he arranged with the Jesuits to offer the community a new home in their parish in Mayfair, where although reduced in numbers, they have continued to flourish, adding new activities to replace some of what had been lost.

“He was also one of the first senior bishops to temper his public opposition to gay marriage, with a statement that there could be value in civil unions for same – sex couples.

“LGBT Catholics should be grateful that we now have a friend in high places.  He has already been named to the Congregation for bishops, and will participate in the selection of new men for the office, and is likely to participate in time, in the next conclave to elect Pope Francis’ successor.”

Some commentators have noted that the pope’s selection of cardinals indicates that he is interested in more socially-conscious and pastorally-oriented church leaders.  Cardinal-elect Andrew Yeom Soo-jung of Seoul, South Korea, has a commitment to serving the poor.  Cardinal-elect Orlando B. Quevedo of Cotabato in the Philippines is known for advocating for parishes to adopt more pastoral approaches to ministry.

Is it too risky of an inference to suppose that in his appointment of England’s Nichols, Pope Francis is also indicating, once again, an opening towards LGBT people?

Religion.blogs.cnn.com: What the Pope’s choice of new cardinals means